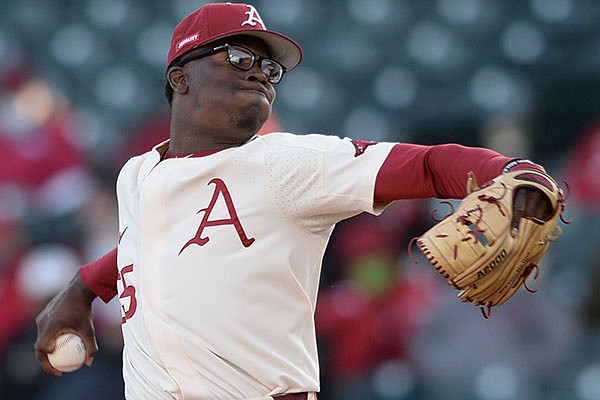 How can a baseball team that loses Kevin Kopps, Casey Opitz, Christian Franklin, Patrick Wicklander and Peyton Pallette open the season ranked No. 4 in the USA Today Coaches Poll?

That’s because Dave Van Horn’s 20th team is still loaded. There is both experience and a hugely talented bunch of newcomers, some with Power 5 experience.

SEC coaches predict the Razorbacks to win the SEC West, although Ole Miss is the pick to win the overall crown in a strange twist.

Losing Kopps is the major blow. The Hogs still need to figure out who will be the pitching closer, something Kopps mastered in his sixth year when he went from being among the team’s most average pitchers to the nation’s best overall player.

“If you really look at college baseball, everything begins after the seventh inning,” Van Horn said in an interview about 15 years ago. “That’s the most important thing in my mind.”

No one had it better than Arkansas last year with Kopps. The Hogs weren’t always ahead when he entered the game, often in the seventh inning. But the dugout knew that the other team was typically finished scoring runs. It was a spark for the offense to see the bullpen door swing open and Kopps sprint onto the field.

There are plenty of big arms to fill all the roles for pitching coach Matt Hobbs, but it may take a few weeks for everything to become clear.

So since no one on the current staff has a lot of experience in that role, the closer has to be the No. 1 question as the season begins.

Van Horn said Thursday that the season will begin with second-year players Gabe Starks and Heston Tole as the likely closers. Things can change.

Starks is the flame thrower from Watson Chapel. He’s the most athletic player on the team, dominating metrics in the weight room. He’s developed some elite pitches, with better control than as a true freshman when he made four one-inning appearances.

Tole was 1-0 in 10 relief stints last year and pitched 12 innings. His 2.25 ERA was fourth on the team. He may not have elite stuff like Starks, but it’s much improved from last year when he walked only two against 20 strikeouts.

“Tole may be the guy who makes that Kopps like jump this year,” said Matt Hobbs, the pitching coach. “His fastball keeps getting better. His numbers last year were video game stuff.”

This seems to be filled. True freshman Peyton Stovall has the eye to take walks and the quick bat to spoil pitches. He has an advanced approach for a young hitter. He reminds of the kind of talent oozing from Zack Cox as a true freshman in 2009.

Stovall could hit somewhere else in the lineup, but getting him the most at-bats possible isn’t a bad approach. Plus, the Hogs have plenty of power to stack behind him.

Zack Gregory can also hit first in the lineup, but Stovall has been the leadoff man for his team in every scrimmage for the spring semester.

Stovall can hit for power, but he is best when he’s going to the gaps in the alleys. Most thought he was going to be drafted in the first round, but he set his dollar figure so high that no one took him.

Baseball is all about statistics. Hitting coach Nate Thompson likes to focus on one major statistic that seems to lead to victories: scoring runs.

“Everything we do as far as approach at the plate is about scoring runs,” he said. “It’s the one metric that seems to figure the most into scoring runs.

“We’ve improved our run-scoring numbers the past four years since I’ve been here. It’s hard to score runs in the SEC but that’s what we put our focus on in our approach.”

The Hogs played less games in 2021 than Thompson's first two years, but they still made another jump in scoring runs. They totaled 483 in 63 games for a 7.7 average, the best since bats were changed more than a decade ago.

“Our approach is simple, do whatever it takes,” Thompson said. “But at the end of the day it’s about outscoring the opposition.

“We’ve learned what it takes to score runs in the SEC. Every year we’ve done a little better, raising our total runs per game.

“One of the things we try to do is make it hard on starting pitchers with a good approach. We don’t talk about home runs. We talk about getting our pitch and driving it. Each player may have a different pitch, but when we get that pitch, we are going to try to drive it.”

Expect the Hogs to feature a potent lineup. One respected observer put the top of the lineup as Stovall, Cayden Wallace, Jace Bohrofen and Michael Turner. That’s a left, right, left, left start to the order.

That leaves some real power in Brady Slavens and Robert Moore. Slavens bats left and Moore is a switch hitter.

Would a right hander like to face that first six? Slugger Chris Lanzilli, Jalen Battles and Braydon Webb provided some right-handed punch.

Connor Noland will begin the season as the top man in the rotation. He’s been a weekend guy before, making 19 starts as a true freshman. He made the SEC’s All-Freshman team, but hasn’t been as good the last two seasons.

Noland was superb in the fall and “is back” by all accounts. He’s got a sinker that has been nasty over the last five weeks. It might not be quite as violent in downward movement (or consistent) as the pitch Kopps twirled last season, but teammates don’t like it when they are in the batter’s box.

It has looked un-hittable at times.

There are lots of other candidates to emerge as weekend starters for SEC play, but true freshman Hagen Smith might be the most fascinating. He might be the best lefty freshman since Nick Schmidt burst on the scene as a Friday night ace in 2005.

Smith, product of Bullard, Texas, will pitch second on the weekend. The third starter in the weekend rotation will be sophomore Jaxon Wiggins. Both are electric, typical of what most SEC teams boost these days.

Obviously, part of that was covered earlier, but Van Horn has always been quick to turn the game over to the bullpen. He’s kept one of the staff aces there. Lefty junior Zack Morris has been solid this winter and might be a popular phone call for Van Horn this spring.

Morris has a dandy breaking pitch. He was so well regarded as a true freshman that Van Horn handed him jersey No. 32, worn the year before by Matt Cronin. There’s something about a number and Van Horn has thought that was a special one for lefty pitchers. Hall of Famers Sandy Koufax and Steve Carlton both wore No. 32.

True freshman Nick Moten could emerge as a starter, but he’s been behind on his buildup after a December illness. Van Horn said Thursday that he’s still behind on his pitch count and will be brought along slowly.

Others sure to get some innings out of the bullpen are returnees Zebulon Vermillion, Kole Ramage, Evan Gray, Evan Taylor and Mark Adamiak.

The Hogs have boasted some of college baseball’s top catchers for most of Van Horn’s tenure. Brian Walker, James McCann, Jake Wise and Casey Opitz are a few who have dazzled behind the plate.

Turner, the Kent State transfer with a career .300 average, is the likely starter, but sophomore Dylan Leach is a dandy backup who will play.

Both are great at blocking pitches in the dirt and capable throwers. Neither is as polished as Opitz, but Turner is a better offensive threat. Van Horn has touted him as the clean-up batter.

The real question will be in center field. Can the Hogs be as good? They’ve been terrific for what seems like forever.

Webb seemed to be the likely candidate to replace Franklin, a superb follow-up for Dominic Fletcher last season. But Webb has battled a quadriceps injury and Zack Gregory will open the season in center.

The rest of the defense seems just as solid as usual for a Van Horn team.

Can Slavens cover as much ground in right field as Wallace did last year? Wallace has dazzled at third base this winter.

Stovall is solid at first base and there may not be a better double-play combo than the shortstop Battles and Moore at second base.

This is at the heart of what college baseball is all about. Some teams can’t field a pitching staff that throws strikes. This staff, although not with great experience, has thrown strikes in scrimmages.

For example, Hobbs was pleased when Taylor and Gray, veterans with top end pitches, threw more strikes in the fall. That could be a huge boost to the staff.

But that’s only half of it. Can the offense limit strikeouts? The Hogs led the SEC in home runs and walks, but they also had too many punch outs last year.

Slavens, Wallace and Moore all were better in the fall at becoming more selective.

Franklin, the team leader with 78 strikeouts, is gone. But Slavens (63) and Wallace (61) are trying to reduce their number of swings and misses. Slavens has always been aggressive, but is trying to take more walks this year. He walked only 19 times last season, last among regulars.