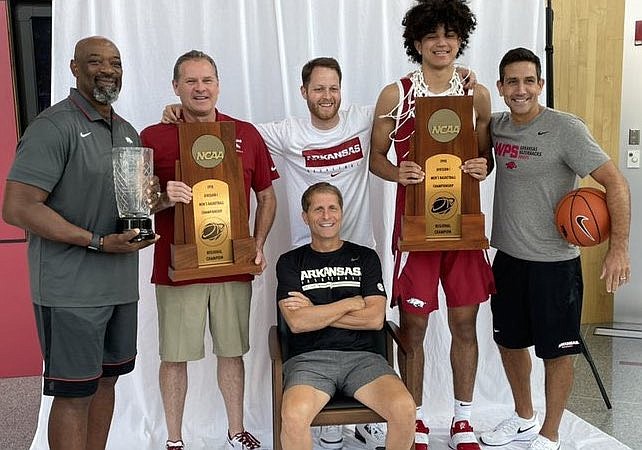 Arkansas coach Eric Musselman and his staff show off some of the program's trophies, including the 1994 national championship trophy, with Anthony Black.

Arkansas basketball target and McDonald’s All-American Anthony Black of Duncanville, Texas, is expected to visit the No. 23 Razorbacks on Saturday for their home game against No. 16 Tennessee.

Black (6-7, 198) is a 5-star prospect per ESPN and recently narrowed his list to Arkansas, Gonzaga, Memphis, Georgia, Oklahoma State and TCU. He also could turn professional and play in the G-League, an NBA developmental league.

“He is planning on being there tomorrow,” Duncanville head coach David Peavy said Friday afternoon. “With all honesty, I can tell you that I don’t know where he is going to go. I do know – and I know what matters to y’all – that Arkansas is a big player. They are in heavy consideration.”

Black took an official visit to Arkansas on Sept. 17-19 and will be on an unofficial trip this weekend.

That class is ranked third nationally by ESPN, 247 Sports and Rivals and Walsh is also expected to be inside Bud Walton Arena on Saturday.

Black calls Peavy his stepdad and he and his mom Jennifer Black and younger brothers have lived under the same roof with the coach the last three years.

“I have given as much advice as I can him give through this process,” Peavy said. “I told him months ago that he has some really good options and he can’t go wrong. I have just stepped away and let him and his mom make that decision.

“I am staying out of it as much as I can, but listening to them, I know that Arkansas is definitely a good possibility for him.”

Duncanville is 28-1, ranked second nationally by MaxPreps and has won its last 13 games.

Black has averaged 13.5 points, 5.8 rebounds and 4.0 assists per game this season while playing in 15 games for Duncanville around a protracted legal battle over his eligibility.

He transferred from Coppell when Peavy and his mom moved from there to Duncanville last summer.

Black has won temporary restraining offers that have allowed him to play, but the UIL recently appealed to keep him from playing again.

Peavy has been strategically not playing Black in any of his 14 league games as to not jeopardize Duncanville’s status for the UIL Class 6A state playoffs.

The Panthers will begin state tournament play on Tuesday against Killean Shoemaker (21-14) needing to win seven games to win the state title.

“Legally right now, he can play,” Peavy said. “But the UIL is continuing to appeal. They have submitted some stuff to the court of appeals. As of now, we have won before over and over everything that we have had to go before judges.

“Right now I am just trying to be patient through the process and let them work out some things while we sit him. But technically and legally, the courts have said he can play so if we do play him, it is in our rights.”

Black has shown a great deal of maturity during the process according to Peavy.

“It has been unbelievable,” Peavy said. “We talked about it the other day. There have been some times when you could tell he was down at home. But for the most part he has shown a lot of maturity, he has embraced the fact that he is just going to focus on getting better, continue to get stronger and just work on the things he needs to work on.

“He practices as hard as anybody even when he knows he is not playing. If you came to practice, you wouldn’t know he is not playing the next game. He is a great cheerleader and he is learning how to coach.

“He has sat and watched so many games now that he has become a pretty good assistant coach.”

Black has more than 20 scholarship offers from schools with ones from Duke, Kansas, Illinois, Oklahoma and Texas A&M and others in addition to his finalists.

ESPN rates Black as the No. 9 small forward and No. 20 overall recruit in the nation for the 2022 class. He is the No. 3 senior prospect in Texas.