Gators upset No. 2 Auburn, storm court ahead of Arkansas game 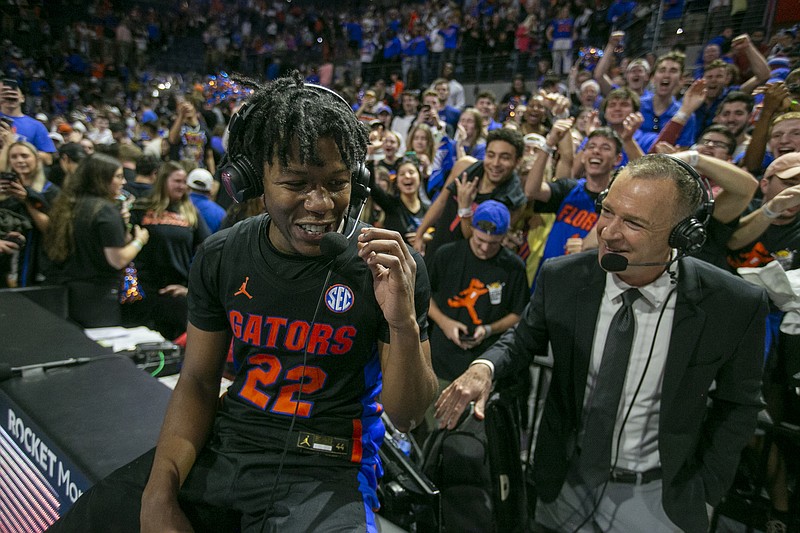 GAINESVILLE, Fla. — Tyree Appleby found himself swarmed by students, fans and teammates at midcourt. It was the first time a scene like that unfolded at the O'Connell Center in more than 30 years.

Appleby was right in the middle of it, enjoying every second in the spotlight. He probably should have been lifted onto someone's shoulders, too.

Appleby scored 20 of his 26 points in the second half, Colin Castleton added 19 and Florida rallied to beat No. 2 Auburn 63-62 Saturday to extend its home dominance in the series. It was Florida’s first home victory against a team ranked that high in the Associated Press college basketball poll.

And the crowd reaction showed.

“Happy for them they got a chance to have that moment postgame, for sure," said Florida coach Mike White, who improved to 5-0 against Auburn coach Bruce Pearl. "Pretty special.”

The Tigers (24-3, 12-2 Southeastern Conference) lost their second straight on the road — both ending with fans rushing the floor — and dropped their first game in regulation. They previously lost to UConn and Arkansas in overtime.

Appleby had everything to do with this one, which was Florida’s 14th straight over Auburn in Gainesville. The senior made 6 of 9 shots in the second half, including 4 of 6 from 3-point range, and was perfect from the free-throw line.

Still, the Tigers had a chance in the final seconds. Wendell Green Jr. got the ball with 7.1 seconds to play and was dribbling at the top of the key when he tried to pass to Walker Kessler down low. The Gators (17-10, 7-7) knocked it away, and the clock ran out.

Florida students poured onto the court to celebrate, but police officers quickly moved them back into the stands. They returned and started chanting “Appleby, Appleby." It was the first court storming in Gainesville since a victory against TCU in the NIT in 1986.

Appleby, a 6-foot-1 guard who transferred from Cleveland State three years ago, dominated down the stretch, creating open shots for teammates and hitting a huge 3-pointer with about 4 minutes to play and another with 2:16 remaining that push the lead to 61-53.

“We relied too much on Jabari,” said Pearl, who also lamented his team's 17 turnovers. “We're best when everybody contributed and that wasn't the case today.”

The Tigers were hoping to end a 13-game skid in the O’Connell Center, a losing streak that started shortly after former Florida coach Billy Donovan arrived in Gainesville. Auburn’s last win in the O’Dome came in February 1996, one month before the Gators hired Donovan.

Pearl’s team used a solid second half – its opening 20 minutes were close to abysmal – to take control. The Tigers put together a 21-4 run that spanned halftime, turning an eight-point deficit into a nine-point lead. Smith was huge during the spurt, contributing two 3-pointers, a three-point play, a jumper, two free throws and a blocked shot.

The Gators missed all 10 shots during an 8 ½-minute span in which Auburn was closing the gap and building its lead. But Florida made seven 3s in the second half, including three in the final 5 minutes to eke out a victory.

“It feels good. I won’t lie to you, it feels really good,” Castleton said.

Auburn likely will drop a few more spots in the next AP college basketball poll, which will be released Monday.

Auburn: Despite losing for the second time in four games – both on the road – the Tigers are still the best team in the SEC and likely will be a No. 1 seed in the NCAA Tournament. They clearly need to get more consistent play from their backcourt, which had 10 of the 17 turnovers.

Florida: The Gators needed a victory like this to improve their chances of making a fifth straight NCAA Tournament. They had lost two in a row.