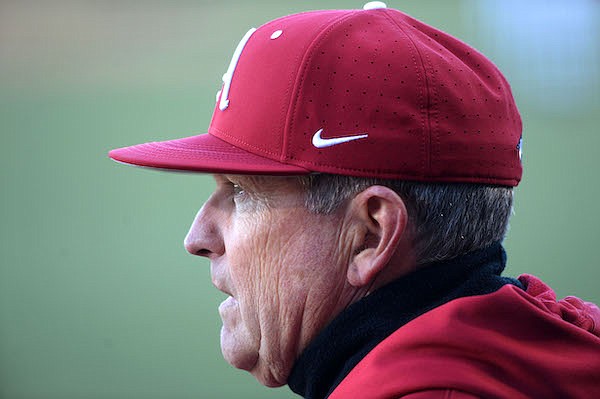 Arkansas coach Dave Van Horn is shown during a game against Illinois State on Friday, Feb. 18, 2022, in Fayetteville.

Here’s a prediction: Arkansas is going to hit a lot of home runs this season. The 2022 Arkansas baseball team is loaded with power strokes.

Don’t get alarmed if that doesn’t show up for a few weeks. It’s all about the weather.

The Hogs crushed some pitches last weekend but didn’t have a lot to show for it.

When the wind blows in, the ball doesn’t leave the park. That was the case last weekend when anything to right or right-center field — and this team is loaded with lefty power — was going to have a hard time going over the yellow line atop the Baum-Walker Stadium outfield fence.

They won 4-2 on Sunday without a homer.

It’s OK to play with the wind blowing in, but it probably keeps Arkansas coach Dave Van Horn from going deeper in his bullpen to take a look at some youngsters. He’s got a long list of talented pitchers needing some innings this weekend at the Round Rock (Texas) Classic.

Unfortunately, the Hogs are likely to play Indiana, Stanford and Louisiana-Lafayette in cold, windy conditions that won’t be conducive to scoring runs. The wind in a big, minor league park will be blowing in again. Dell Diamond is 335 feet down the line in left field, 400 to center and 325 down the line in right field.

“We just have got to mentally get through that,” Van Horn said. “Hey, we’re going to play in that condition and it doesn’t usually help us when the wind is blowing in like that.

“Our guys played all weekend with the wind blowing in and we persevered a little bit, but it was frustrating at times for our hitters because they hit some balls hard that would have left the field, left the yard, and it changed the game a little obviously.

“Now three days in a row we’re going to get the same wind. So we need to go there with the mindset that when we get a chance to score we’ve got to score.  And we have to pitch well and play really good defense.”

Van Horn is going with the same starting rotation of Connor Noland, Hagen Smith and Jaxon Wiggins. Kole Ramage, who pitched twice against ISU, is still slated to be one of the first out of the bullpen.

That may surprise some, but not to those inside the program. Ramage, relegated to a lot of midweek action last year, has picked up the pace for a repeat senior season, thanks to relaxed rules because of covid-19.

“I think I mentioned this before the season started to you guys that Ramage is a lot better,” Van Horn said. “What you saw this weekend is what we’ve been seeing.

“Which is his fastball is better but his slider is harder than what it was last year — 3 mph or somewhere in there — and it’s hard to hit. He’s always had a really good changeup and he didn’t have to use the changeup too much.

“Yeah, he could be a guy that could close, use him for the last three innings on a Friday and maybe throw him for an inning on Sunday, or use him just like we used him last weekend, a little bit more than the other guys.

“He’s an older guy. He wants to pitch. I'm really happy for him because he’s put in a lot of time even from last season until now getting ready for his last season of college baseball.”

It’s not like there are problems with the bullpen, but Van Horn would like a cushion to see some. Scoring some runs would be nice, but again, that may be tough with the wind blowing in. Who is likely to pitch on the road trip?

“You'll see some of the guys that pitched this past weekend obviously because they did a nice job,” Van Horn said. “But (expect to see) Nick Griffin, the left hander who had Tommy John surgery about a month after he got here. He came here hurt his freshman year. He's been looking good and we almost got him in the game Sunday.

“And then also Issac Bracken, who transferred here a year ago and got hurt in January. He's an older player. He's a grad transfer. He's from Northern Colorado. He's gotten himself ready to go.

“Elijah Trest is throwing the ball pretty well. I mean, I could go on and on. There's some more guys but those are just a few guys that jumped out. Evan Gray's thrown the ball well this year for us. Nick Moten is a freshman who kind of got sick over the holidays. That threw him back. He may be on the mound this weekend or maybe midweek. He's a freshman with a really good arm. We need to get him out there.”