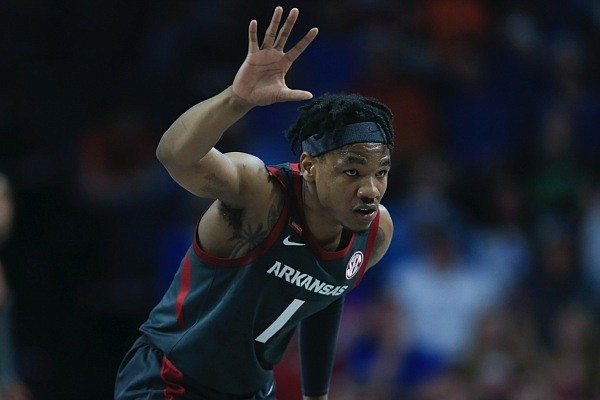 Arkansas guard JD Notae is shown against Florida during the first half of an NCAA college basketball game Tuesday, Feb. 22, 2022, in Gainesville, Fla. (AP Photo/Matt Stamey)

Did you know what a palindrome was before last night? I didn’t, so I would not have known about any of this until I read the WholeHogSports forums this morning.

For the record, here is the definition: a word, phrase, or sequence that reads the same backward as forward.

Heck, I couldn’t say it the first time I read about it, much less figure out what it meant.

But for those in the know, it was probably a foregone conclusion that something weird was going to happen last night in Gainesville, maybe even the first Arkansas win in basketball there since 1995.

You have to use the abbreviation for the year to make it perfect, but Tuesday was 2/22/22 and the Arkansas basketball team won its 22nd game, 82-74.

I wish there were some more cool twos, but no one wearing one on an Arkansas jersey scored a single point, much less a two-pointer. Florida’s Colin Castleton, wearing 12, scored 29 points. Tyree Appleby, wearing 22, scored 19 points. Both made two critical turnovers.

Had enough? Did you know that Pat Bradley, the analyst for SEC Now for the post-game Tuesday night, wore No. 22 when he scored 1,765 points for the Hogs?

I wanted more. What was the date the last time the Hogs won in Gainesville? It was in February, but was the 28th of that month. It was the second to the last regular season game.

Here’s the last relevant two: The 1995 Hogs would finish second, losing to UCLA in the national title game. They were also second in the SEC.

After Notae, there seemed to be two more stars in this game, Jaylin Williams and Devo Davis. It’s like there were two Devos, maybe the reason he wears No. 4. He seemed to be everywhere in the closing minutes.

Two of the best defenders to play for two of the greatest Arkansas teams continue to marvel at the way this team has come together on defense. Both Jim Counce and Corey Beck sent me notes about what they saw Tuesday night.

“Jaylin Williams could be the SEC player of the year if the Hogs can close out these last three teams,” Counce said. “I realize that is three big ‘ifs,’ but I wouldn’t want to bet against this team.

“I realize that beating Tennessee in Knoxville is a big ask.”

And, with the way Davis has played in the last three games, Counce added, “Devo is the X-factor for this team.”

Beck doesn’t recall much of the ’95 victory over Florida other than it was comfortable at the end. Of the toughness this team has displayed of late, he said, “That’s what I love. It’s the most important thing in any player. They have that.”

They are extremely well coached on defense. Brad Dunn, part of the Nolan Richardson staff in ’95, loves what he sees from Arkansas coach Eric Musselman as far as scouting.

“I’ve heard him talk about their preparation,” Dunn said. “For example, they had some detail on what the Auburn scorer, Jabari Smith, did that was unusual. He’s right handed, but shot better on his first dribble going to his left.

“To know that it would probably require over 30 hours of tape study on just one player. I know Eric Musselman can’t do that as the head coach, so he’s really getting some great information from the coaches who are going over advance tape.

“So what they are doing on defense is a lot toughness, but it’s incredible detail in scouting.”

And toughness is just one of the intangibles Dunn sees.

"The chemistry with this team has developed in a hurry," he said. "It's seemed to get better every time they play. Don't minimize the way players and coaches bond and the importance.

"The other thing I see is just an incredible help and recover defense. I have not seen a team play that way in a long time. They don't give up many layups in the halfcourt."

Defense is important, Beck said, but this Arkansas team also has toughness on the offensive end, too, to claw late in a possession or fight for loose balls, especially at game’s end. Florida coach Mike White bemoaned the way the Hogs beat his players to loose balls in the stretch run.

“What I see is a good defensive team that is starting to find its offense,” Beck said. “They are probably going to keep getting better on offense and that will make them a tough team to beat in the tournament. You need offense, too.”

Oh, there you go, ahead of the last punctuation mark, one more deuce.