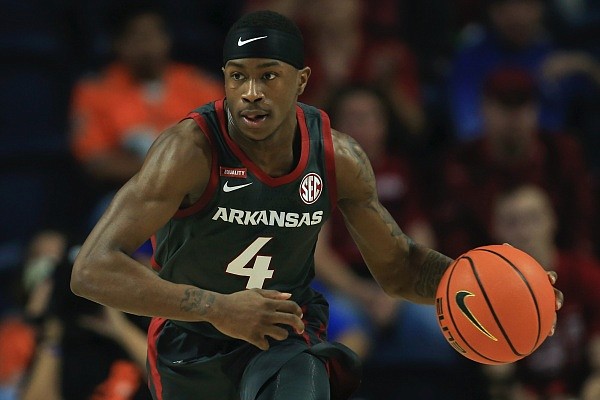 FAYETTEVILLE — Arkansas guard Davonte Davis on Tuesday looked every bit the All-SEC performer he was projected to be prior to the season.

The sophomore helped guide the Razorbacks to their 22nd win overall and 11th in conference play with arguably his most well-rounded performance of the season. He finished with 19 points on 7 of 10 shooting, 6 rebounds and 4 assists in 28 minutes.

Razorbacks coach Eric Musselman said last weekend that although Davis has played off the bench in each game since Jan. 8, he is a starter in the eyes of the staff. Of late, he has been a valuable part of the team's closing lineups.

In Arkansas’ last five outings, he is averaging 10.2 points on 50% from the floor, 4.2 rebounds, 1.8 assists and 1.2 steals. Since turning the ball over 5 times against Auburn and at Alabama, Davis has just 2 turnovers in 79 minutes played.

“Just knowing I'm able to play freely, be able to get my teammates involved, (I’m) just letting the game come to me,” Davis said. “From there, just knowing whatever it takes to win, I'll do it. If it's scoring, rebounding or passing the ball to a teammate, whatever it takes.”

Since the Feb. 8 win over then-No. 1 Auburn, Davis has the second-best net rating of any Razorback (36.8), according to CBB Analytics. In that span, the team’s offensive rating is 115.9 over his 142 minutes in the lineup, and it plummets to 77.9 in the guard’s 63 minutes on the bench.

Davis, fairly unexpectedly, has knocked down 8 of his last 15 three-point attempts. He was previously 2 of 18 beyond the arc against conference teams.

Davis has found the most perimeter success in the left corner (4 of 7) and the right wing (3 of 4). In the last five games, Arkansas has shot 45.0% on corner threes with Davis on the floor, per CBB Analytics, up from 11.1% without him.

“(I’m) just playing my game,” Davis said. “I work on it, so why not do it in the game? As I continue to work on my game, I’ll continue to do what I do in my workouts in the game as the game comes to me.

“I think as long as I continue to do that, things will continue to open up for me on the offensive end.”

Davis is 7 of his last 12 on catch-and-shoot three-point attempts, including 5 of 9 on the left side of the floor and 2 of 2 on the right wing.

He has also gotten back to the slashing ways that made him a fan favorite and challenging cover as a freshman. Entering Saturday’s game against No. 6 Kentucky, Davis has scored six times in transition and three times on drives to the rim in the half court in the last two-and-a-half weeks.

According to CBB Analytics, he boasts a team-best true shooting percentage of 63.7% since Feb. 8.

"He’s done a great job in transition," Musselman said Wednesday. "He’s shooting the ball with much more confidence. His game is really simulating what he did last year and his success. He’s catching that thing, he’s attacking the rim, he’s stretching the defense out with making threes.

"He’s an elite loose-ball getter. People hear that and they’re like, ‘Whatever.’ ... Obviously we know about his defense. He’s defending at a high level. Then offensively I think he’s playing with as much confidence as he has the last two years."

Davis, who is third on the team with 34 assists in SEC play, had 6 potential assists at Florida, and teammates finished 4 of 5 two-point attempts he set up. The Razorbacks have converted 15 of the last 18 shots inside the arc that Davis has created.

Areas of the guard’s game that may not receive as much attention are his offensive rebounding and knack for stealing extra possessions for Arkansas. Davis has grabbed 21 of the Razorbacks’ misses in league play — one fewer than forward Jaylin Williams — and finished with two or more offensive boards in six games.

His efforts have aided Arkansas in averaging 12.7 second-chance points per game in the SEC.

Twice now in the last five games Musselman has said Davis turned in what he considered his best showing of the season. For the Razorbacks, that is especially encouraging as March approaches.

“That's the Devo we know,” Razorbacks guard JD Notae said. “We know he's capable of doing that each and every night. And he just showed us that he's Devo.”