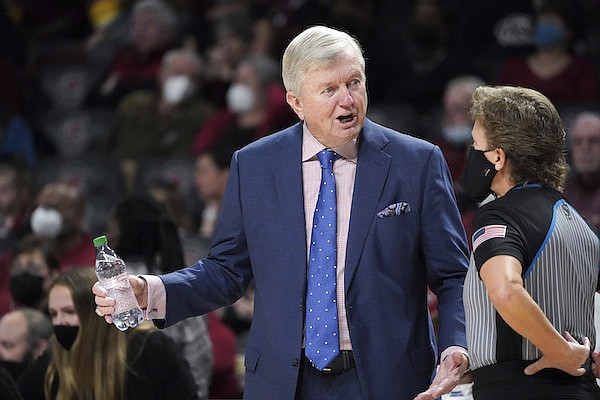 Gary Blair will coach his final regular-season home game for Texas A&M tonight when the Aggies host top-ranked South Carolina, but that’s not the only milestone it will mark.

The Aggies will unveil the court at Reed Arena in College Station, Texas, as “Gary Blair Court,” which will feature his signature on the hardwood, in a pregame ceremony.

Blair will become one of three women’s basketball coaches with a court named after them, joining the likes of Tennessee’s Pat Summitt and North Carolina State’s Kay Yow. In 37 years as a college coach, he’s earned 852 wins, including 443 at Texas A&M, making him the winningest coach in school history.

“This is an incredible honor,” Blair told 12thman.com. “Having my name on that beautiful floor is a humbling experience. It will be a symbol of all those that helped build this program and all the Aggies that battle on that court, not just in women’s basketball, but in men’s basketball and volleyball as well. My former players, assistants and staff members deserve all the credit. We dedicated our lives to this program and A&M and built it on doing things the right way, the Aggie way.”

But the Aggies’ (14-12, 4-10 in SEC) chances at an NCAA Tournament bid aren’t looking great. Texas A&M has lost three straight, including an 81-79 double-overtime loss at Alabama on Sunday.

Blair, a Women’s Basketball Hall of Fame inductee, has been coaching women’s basketball for 49 years. He began at Dallas South Oak Cliff High School in 1973 before taking his first collegiate job as an assistant coach at Louisiana Tech, eventually becoming head coach at Stephen F. Austin and then the University of Arkansas, where he took the Razorbacks to their only Final Four appearance in 1998. Blair was named Texas A&M’s women’s basketball head coach in 2003 and has spent the last 19 years with the program.

LSU has leaned on talented guards to help propel them to the top of the SEC, but post players were a key in the Tigers’ 66-61 win over Florida on Sunday.

Post players combined to make 13 of 17 shots from the floor to help the Tigers move into sole possession of second place in the SEC with two games remaining. The Gators are tied for third with Tennessee.

The guard trio of Khayla Pointer, Alexis Morris and Jailin Cherry combined for just 9-of-47 shooting from the floor for LSU, but the post players took up the slack.

Faustine Aifuwa and Autumn Newby each scored in double figures, going for 10 and 13 points respectively. They combined for 14 rebounds. Aifuwa also contributed five blocked shots, including two late in the game. Even backups Hannah Gusters and Awa Trasi combined for six points and seven rebounds.

I’ve been challenging them,” LSU Coach Kim Mulkey told The Advocate of her post players. “They’ve heard all the criticism. They know we have great guards. Those are big, big buckets for us. We know they rebound and defend.”

Kentucky is trying to claw its way back into the NCAA Tournament picture with a week left in the regular season.

Howard, who has been touted as the possible top pick in the next WNBA Draft, poured in a game-high 29 points and grabbed 10 rebounds in Kentucky’s 78-55 win at Arkansas on Sunday. She scored 11 in the first quarter to help the Wildcats take control quickly.

Edwards, a 6-2 redshirt junior, has also been a key contributor, coming off the bench in Kentucky’s late-season surge. She’s averaged 21 points per game in the winning streak and has also registered three double-doubles. Edwards put up 17 points and a game-high 13 rebounds against Arkansas.

She also had 23 points and 10 rebounds as the Wildcats wiped out a 15-point fourth-quarter deficit to defeat Mississippi State in this latest surge. Kentucky finished the game on a 24-2 run.

Kentucky closes the regular season at Missouri tonight and hosts Auburn on Sunday.

Alabama’s Brittany Davis put together a pair of big performances to lead the Crimson Tide to two wins and was honored as the SEC Player of the Week for her efforts. She poured in a career-high 32 points, including seven three-pointers, to help the Tide to an 81-79 double-overtime win against Texas A&M on Sunday. Davis scored 29 of her points in the second half and overtime periods. She also scored 23 in Alabama’s win over Tennessee earlier in the week

Jada Walker helped lead Kentucky to four wins in eight days, including three in one week and was named SEC Freshman of the Week. She scored 17 points, added five rebounds and a steal as the Wildcats rallied past Mississippi State. Walker added 11 points, 3 rebounds, 3 assists and 2 steals in a win over Vanderbilt.

Game of the Week: LSU at Tennessee, Sunday, 1 p.m.

The No. 16 Lady Vols have been reeling lately, losing two straight going into tonight’s game against Mississippi State. But the No. 8 Lady Tigers are riding a six-game winning as they get set to host Alabama. It’s the only matchup of ranked teams in the league this final week.