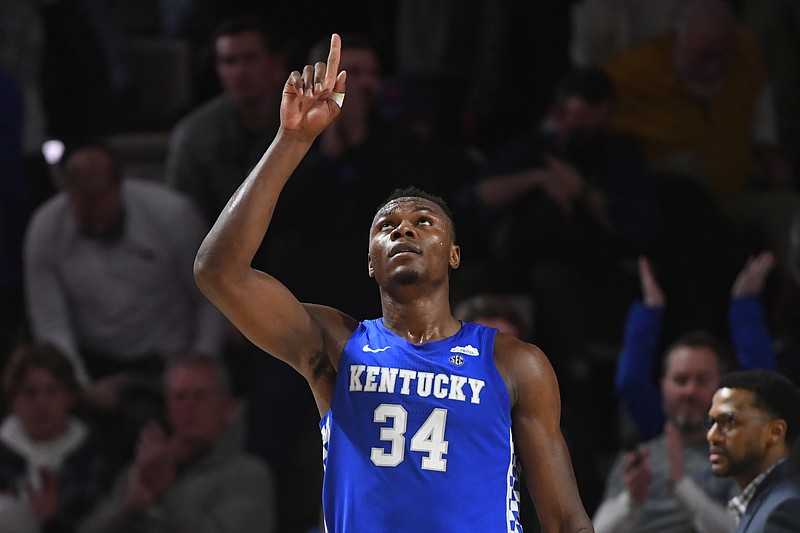 FAYETTEVILLE — When Kentucky beat Western Kentucky 95-60 earlier this season, Wildcats junior Oscar Tshiebwe outrebounded Shaquille O’Neal by seven and the Hilltoppers by one.

Mike Phillips had been the last Kentucky player to have as many as 28 rebounds, in 1976 against Tennessee.

When Tshiebwe was told after the game he had more rebounds than an entire opposing team, he said, “That’s crazy.”

So are Tshiebwe’s season stats.

Going into No. 6 Kentucky’s game against the No. 18 Arkansas Razorbacks on Saturday in Walton Arena, Tshiebwe is averaging 16.4 points and a national-leading 15.3 rebounds.

Statistically, Tshiebwe had a slightly above average game with 17 points and 16 rebounds Wednesday night when the Wildcats beat LSU 71-66 in Rupp Arena.

At Kentucky’s Pro Day in October, Tshiebwe had a vertical jump of 33 inches, which would have tied for 45th at last summer’s NBA Scouting Combine.

Basketball Podcast of Mid-America: Feeling like the '90s as Kentucky comes to town

“I’m not the tallest guy,” Tshiebwe said according to the Lexington Herald-Leader. “But I think I have a big heart.

“God says everything is possible. When you go for it, you’re going to get it. … When I stop fighting is when the game is up. I don’t care about points. I just want to go out there and get the rebounds.”

Tshiebwe, who scored a career-high 30 points at Vanderbilt this season, has 10 consecutive double-doubles and 22 in 28 games.

“Incredible energy,” University of Arkansas Coach Eric Musselman said when asked what makes Tshiebwe such an effective rebounder. “When he runs in transition offense, it’s like he’s in a track meet.

“He’s incredibly explosive as an offensive rebounder,” Musselman said. “You’re going to have to hold your ground, too. You’re going to need to have a wide base when you box out.

“If you box out with a skinny base, he’s going to dislodge you. That, we promise.

“So if you’re not a physical block-out player, and you skinny block out, you’re going to get pushed underneath the rim, and he’s going to grab the ball and dunk it.”

Tshiebwe, speaking in a matter-of-fact tone without a hint of bragging, told reporters opposing teams have to use double- or triple-teams to keep him off the boards.

“One person cannot block me out,” he said.

If not for Tshiebwe, Williams’ rebounding average of 9.6 would lead the SEC.

“He’s one of the best rebounders ever,” Williams said. “He’s a great player. It’s going to be a team effort to stop him on the glass. I’m ready to play.”

Williams, who has 10 double-doubles this season and is averaging 10.4 points, said that in watching film of Kentucky, what stands out is how fast Tshiebwe runs the floor.

“I know I’m going to have to sprint back every single time,” Williams said. “I know that’s going to be a challenge for sure, but it’s a battle I want to go against.”

Tshiebwe transferred to Kentucky from West Virginia after playing 10 games for the Mountaineers last season and averaging 8.5 points and 7.8 rebounds in 19.9 minutes.

“Sometimes you choose a place and you get there and it’s not working,” Tshiebwe said in a video conference with reporters last April. “It’s not like you don’t like the people, don’t like the place. It’s just you don’t feel like you’ve got to keep going over there.”

Tshiebwe sat out the rest of the 2020-21 season after transferring, but he’s been worth the wait for Kentucky.

“Oscar is one of the most unique players in the country,” Wildcats senior guard Davion Mintz told reporters. “I don’t think anyone provides what he does to their team.”

“I was a goalie,” Tshiebwe said according to the Herald-Leader. “That meant, ‘I’ve got to catch everything.’

“I think that really helped me, too, when it came to basketball.

“Every time somebody shoots the ball, my mind is like, ‘I’m a goalie. I don’t want anybody to score.’ ”

Or anybody else to get a rebound.