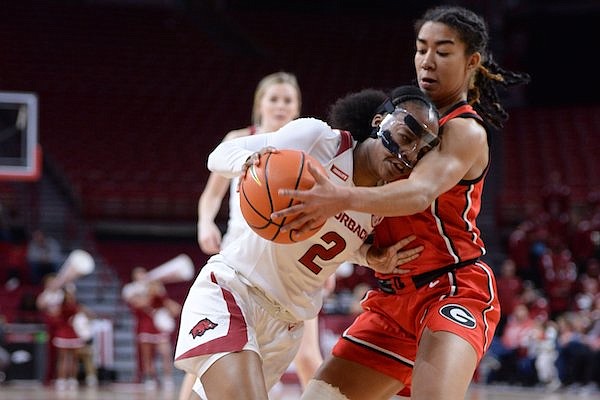 Arkansas guard Samara Spencer (2) drives to the lane Thursday, Feb. 24, 2022, as Georgia guard Chloe Chapman defends during the first half of play in Bud Walton Arena.

University of Arkansas women’s basketball Coach Mike Neighbors acknowledged he’s scrambling to come up with a plan for his team’s fifth game in 10 days.

The Razorbacks close the regular season at Mississippi State in Humphrey Coliseum. Tip-off is scheduled for 5 p.m. Central.

“I’ve never had to play five games in 10 days,” Neighbors said following Thursday 63-62 loss to No. 25 Georgia. “I’ve been talking to WNBA, NBA people about people who have been in these situations. And two, we’re trying to prepare for the SEC Tournament and the postseason tournament, too.

Arkansas was forced into this late-season overload when the SEC rescheduled its game game at Ole Miss for Tuesday. That game, originally scheduled for Dec. 30, was postponed because of covid-19 issues within the Rebels’ program.

Neighbors acknowledged after Thursday’s game that the team is showing signs of fatigue in the midst of a four-game losing streak. The numbers show it, too. The Razorbacks are a combined15 of 68 from the three-point line (22%) in their last four games. In addition, that’s averaging less than four made three-pointers per game. They have averaged nine made threes most of the season.

Arkansas played only seven players against Georgia and guard Amber Ramirez, the team’s lone senior, has played 40 minutes in four of the last five games. Samara Spencer and Sasha Goforth have also averaged about 35 minutes a game in the last five. Neighbors said others will most likely have to contribute today.

“I thought about playing 10 or 11 or 12 to maybe have some legs, it just didn’t work out that way,” Neighbors said. “Now you’re talking about playing some kids who haven’t played meaningful minutes in the last four or five games. That’s extra hard.”

Arkansas has dealt with injuries to Erynn Barnum (knee) and Makayla Daniels (bone bruise) that caused them to miss time. Daniels showed some signs of being closer to 100% on Thursday, scoring 18 of her game-high 21 points in the second half.

The Razorbacks took another hit this week when Spencer suffered a broken nose in the game at Ole Miss on Tuesday. She was forced to play Thursday with a face guard, which definitely affected her game, Neighbors said.

She finished with 9 points, 5 rebounds, 4 assists and 6 turnovers in 36 minutes. She made two free throws with 27 seconds left in the fourth quarter to give Arkansas a 62-60 lead.

Neighbors said it didn’t help that Arkansas was unable to practice on Wednesday because of icy roads, which gave her limited time to adjust to playing with the mask.

“It’s a vision thing, a feel,” Neighbors said. “It’s incredibly hard (to adjust to). She wanted to try to play without it but that wasn’t an option. It was too dangerous.

“And we couldn’t get to practice Wednesday because of the weather, so she literally had hours to adjust to it.”

Mississippi State (15-12, 6-9) has also lost four in a row. The Bulldogs got blown out in the second half by Tennessee on the road on Thursday. They only trailed 30-27 at halftime, but the Lady Vols rolled to an 86-64 win. Kentucky erased a 15-point fourth-quarter deficit, finishing the game on a 17-2 run to also down Mississippi State 81-74 during the skid.

Arkansas rolled to a 74-54 win over the Bulldogs in Walton Arena a month ago. But that game was tied 28-28 at halftime. The Razorbacks scored 32 points in the third quarter and cruised in the second half.

Neighbors hopes others are paying attention to the obstacles the Razorbacks have had to deal with when it comes to their NCAA Tournament chances. The Razorbacks, who have been in the top 25 in the NET rankings almost all season, have slipped to 33 this week and could be headed for the NCAA bubble with another loss.

“I hope people around the country understand what we’ve been through and will take that under consideration when they’re trying to judge us for the way we’ve been playing the last two weeks,” Neighbors said.

There’s still some question about the Razorbacks’ seeding in next week’s SEC Tournament heading into the final day of the regular season. Arkansas, Mississippi State and Missouri are all tied for eighth in the league at 6-9.

With a win, the Razorbacks will the No. 8 seed and face Missouri at noon on Thursday no matter the outcome of the Missouri-Florida game. If Mississippi State wins and Florida wins, Arkansas would slide to the No. 10 seed and play at 6 p.m. on Thursday vs. the No. 7 seed.