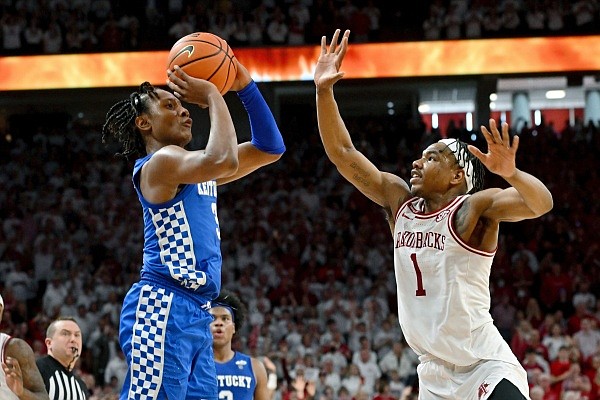 Kentucky guard TyTy Washington Jr. tries to shoot a three-pointer over Arkansas guard JD Notae in the final seconds against Arkansas during the second half of an NCAA college basketball game Saturday, Feb. 26, 2022, in Fayetteville, Ark. (AP Photo/Michael Woods)

FAYETTEVILLE — After Arkansas took a 74-70 lead over Kentucky with 13.9 seconds to play on a Davonte Davis free throw, the Wildcats quickly inbounded the ball and pushed it across halfcourt.

Their plan was obvious: Try to knock down a three-pointer to pull within one, extend the game and force the Razorbacks to make more free throws. Arkansas guard JD Notae wasn’t on board with that strategy.

Notae defended Kentucky guard Sahvir Wheeler up the floor until Wheeler found TyTy Washington on the right wing for what initially appeared to be a clean look beyond the arc. Davis attempted to steal the pass, but came up empty.

Notae, the Razorbacks’ 6-2 guard, proceeded to block the perimeter jumper out of bounds. The clock stopped with 8.8 seconds remaining when the ball hit the arm of an usher who was stationed along the baseline behind a row of photographers.

Out of a Wildcats timeout, Au’Diese Toney tipped another three-point attempt by Kentucky’s Kellan Grady. The second consecutive stop set off an early celebration among Razorbacks fans in Bud Walton Arena.

Those plays painted a perfect picture of Arkansas’ stout three-point defense during their stretch of 13 wins in 14 games. The same team that gave up threes at better than a 36% clip over the first two months of the season is No. 1 in SEC-only games in three-point defense at 28.7%.

“It’s just knowing who we are, knowing how we defend,” Notae said Monday. “We just want to make it as tough as possible. We don’t want nobody to get anything easy. I feel like any five that’s out there for us could guard anybody.

“We just take pride in getting stops. I feel like that’s where that came from.”

Opposing teams’ three-point percentage has declined each month this season. Arkansas held teams to 29.4% from deep in January, and in February that figure dipped to 27.5% as the Razorbacks won 7 of 8 games and moved to 23-6 overall.

Four of Arkansas’ opponents in February attempted at least 40% of their shots beyond the arc, including 51.8% for Alabama. Only one team, Georgia, shot better than 32% from three in a game.

Here are the noteworthy perimeter defensive performances from the Razorbacks in February:

• Georgia made 7 of 11 threes in the first half. The Bulldogs were 1 of 6 after halftime.

• Auburn was 6 of 28 from three in regulation in its loss at Arkansas.

• Alabama made 6 of its first 11 threes against the Razorbacks, then missed 17 of its final 18 attempts.

• Tennessee finished 1 of 14 from deep in the second half of its loss at Arkansas. Santiago Vescovi finished the game 1 of 9, Kennedy Chandler 1 of 5 and Josiah-Jordan James 0 of 6.

“I don’t know when the light bulb came on other than just getting three-balls drained on us on a nightly basis early in the year,” Arkansas coach Eric Musselman said. “But we did just keep talking to the team, really, that we’re doing the same drills that we (did) when we led the nation (in three-point defense). I don’t know what’s so hard about it.

“I do think we started to use our length a little bit better. And I also think the nature of our non-conference schedule, we played a lot of teams that could really shoot the ball. We’ve obviously improved on defending the three. But one of the things we always have to talk about is how do we become multiple in all of our schemes?

“Pick-and-roll, defending the three, that’s been a big growth for us is being able to play in multiple ways.”

The Razorbacks’ perimeter defense overall was solid in the first halves of games in February (32.6%), but it routinely ramped up afterward. Including overtime of the win over then-No. 1 Auburn, opponents made 18 of 82 (22%) threes after halftime.

Arkansas allowed two second-half threes per game on average. Asked what keyed that defensive success, Musselman said it was a mixture of players being more engaged, halftime adjustments and what the coaching staff aimed to emphasize after the break.

“I mentioned (after) the Florida and the Kentucky game that we were willing to maybe concede some inside points and some paint points and not concede the three, just based on how the flow of the game was going,” Musselman said. “We thought if Kentucky started making threes, that would be a little bit too much to make up. And then we felt the same way on the road against Florida.

“So we got a little closer to the three-point shooters, and we stopped digging in the post. I think all those things kind of contribute to numbers when you (look at) certain aspects of your defense.”

Efforts from players like Notae, Toney and Stanley Umude have helped the Razorbacks’ cause. In February, Notae gave up just 7 threes on 29 attempts (24.1%) when the nearest Arkansas defender, and opponents hit 6 of 30 (20%) looks when defended by Umude.

Toney, who regularly matches up with opposing teams’ top shooter, allowed 13 threes on 34 attempts (38.2%). An unseen stat, however, is the number of shots he discourages on account of his length.

“We just had to buy in to what the coaches were telling us and just go out there and execute it,” Notae said. “I mean, we saw the success in the coaching staff, so we just had to trust it.”