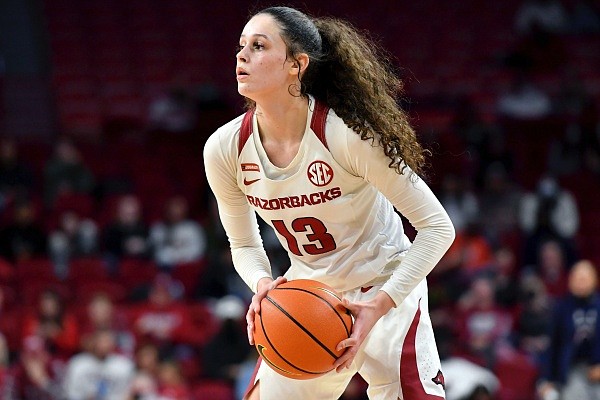 The University of Arkansas women got contributions all around to put an end to a four-game losing streak on Sunday afternoon in Humphrey Coliseum in Starkville, Miss.

Sophomore Sasha Goforth led six Razorbacks in double figures with a season-high 20 points as Arkansas held off Mississippi State late for an 87-79 win to wrap up the regular season.

Arkansas (17-12, 7-9 SEC) secured the No. 8 seed in this week’s SEC Tournament with the win. It will take on Missouri at noon Thursday in Nashville, Tenn.

The Razorbacks have already beaten the Tigers twice this season.

Arkansas Coach Mike Neighbors was pleased with the win, which ended a grueling last couple of weeks that saw his team have to play five games in 10 days. The Razorbacks not only snapped a losing streak, they also bounced back from a 63-62 loss to No. 25 Georgia on Thursday.

“To end the stretch that we had with a win I think encapsulates how our season has gone,” Neighbors said. “The way our team has stayed together and just answered the challenge no matter what it was.”

The Razorbacks took the lead for good 55-54 on Samara Spencer’s bucket with 3:37 left in the third quarter. Back-to-back three-pointers by Goforth and Amber Ramirez pushed the lead to 61-54 and Arkansas led 68-58 with eight minutes to remaining.

Mississippi State, which has now lost five straight, got no closer than four points the rest of the way. The Bulldogs (15-13, 6-10) will be the No. 10 seed and face Kentucky on Thursday in the SEC Tournament.

Neighbors never thought his team gave up throughout the grueling final stretch but acknowledged getting the win helps going forward.

“It makes you feel better. I mean, it just does,” Neighbors said. “We got gut-punched the other night. I don’t know that we played any better, to be honest with you, but we won.”

Goforth was big offensively, going 8 of 13 from the floor and 3 of 3 from beyond the arc, but she had plenty of help. Ramirez chipped in 15 points and a team-high 8 rebounds, Makayla Daniels added 14, Jersey Wolfenbarger 13, Spencer 12 and Erynn Barnum 10 off the bench.

Spencer played stellar in her second game with a mask after suffering a broken nose in Tuesday’s loss at Ole Miss. She finished with a team-high 6 assists and shot 6 of 8 from the free throw line in 34 minutes. Spencer came into the game shooting under 50% at the line in SEC play and committed six turnovers in Thursday’s loss to Georgia.

The 6-1 Goforth, who blocked three shots and played all 40 minutes, helped hold down Mississippi State guard Annastasia Hayes, who was limited to four points in the second half. Arkansas made a switch after Hayes scored 16 in the first half.

Neighbors credited assistant coach Lacey Goldwire for that change, but praised the entire team for contributing on the scouting report because of the quick turnaround and the long week.

“Shout out to Lacey for coming up with it and to Sasha for executing it. I just thought it was a total team effort all the way down the lineup tonight.”

The Bulldogs also had five players in double figures as they made 10 of 22 three-pointers. Ashley Jones added 17 points, including 3 of 3 from three-point range, while 6-4 Charlotte Kohl contributed a double-double with 10 points and a game-high 18 rebounds.