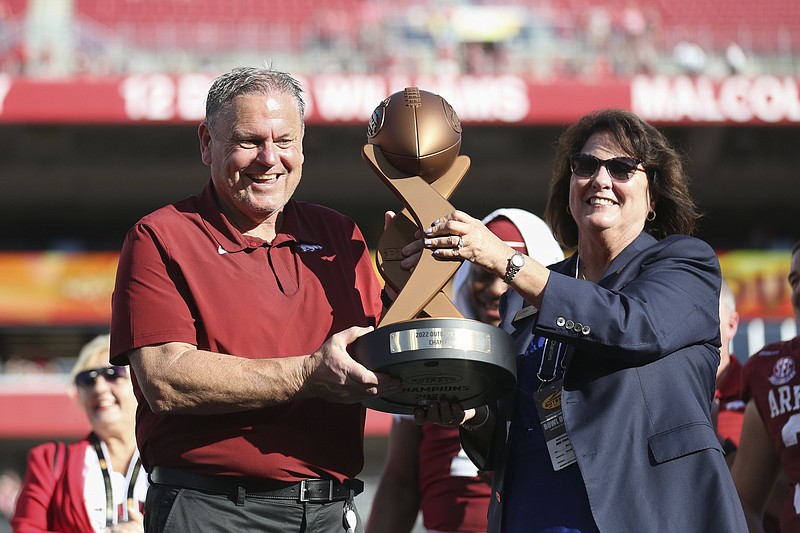 They did it early in their UA tenure. Broyles won in Jacksonville, Fla., after his second season at Arkansas. Holtz did it in his first year, inheriting a great team from Broyles to win perhaps the school's most famous upset. Pittman's came to end his second season and followed a three-year stretch when the Hogs won only seven games.

It’s fair to add one more list for perspective, the most valuable players from the three games: Jim Mooty (1960), Roland Sales (1978) and KJ Jefferson on Saturday.

Jefferson’s performance was similar to what Mooty did to Georgia Tech and Sales to Oklahoma. The Arkansas quarterback put his team on his back in the third quarter to smash the Nittany Lions.

Down 10-7 at halftime, the Hogs changed the read in their run-pass option game to turn Jefferson loose with big runs. The 6-3, 245-pound quarterback led a 7-play, 75-yard drive after the third quarter kickoff. He had runs of 10, 14, 14 and 8, the last for a touchdown that gave the Hogs the lead.

Nothing changed with the next two Arkansas possessions. Jefferson rambled 19 yards to set up a 36-yard field goal to make it 17-10, then opened 34 yards to key a 4-play, 79-yard TD drive that finished the scoring with 2:08 in the third quarter.

Jefferson was sacked five times, but still managed 110 yards on 20 carries. He had 135 before lost yards were subtracted. The Hogs totaled 361 yards rushing, tying the school record set in the 1990 Cotton Bowl against Tennessee.

Jefferson was easily the most dynamic player on the field. He took up the slack after the team lost All-SEC receiver Treylon Burks, who opted out to prepare for the NFL draft.

Six yards came off the rushing total when the Razorbacks knelt down twice to end the game.

Arkansas led in total yards, 451-323. The Lions made only 94 yards in the second half when the Hogs turned quarterback Sean Clifford into a scrambler.

Pittman was simple in the way he described the halftime adjustments that turned the game.

“Great ones get it done,” he said. “What we did, we saw that if our back was over here, that blitzed from (the opposite side). We changed our read to lead the tight end frontside. The (blitz) was not crossing our quarterback and that gave us the read for our two options off of three plays. That read became big.”

It gave the Hogs a 9-4 season and four trophies on the year. They also possess the three trophies in rivalry games against Texas A&M, LSU and Missouri. It was against what some billed as the nation’s toughest schedule in preseason.

“Oh yeah, you don’t want to put a schedule like that down on paper,” Pittman said. “You see it and go, ‘Huh? Who is trying to fire me?’ But you can (handle it) with kids like him.”

Pittman pointed to Jefferson in the front row. There was a glow about the coach as he described the season and what Jefferson had accomplished as a redshirt sophomore. There was little doubt that the Arkansas game plan centered with Jefferson.

“It was going to feature KJ, our running backs and our offensive line,” Pittman said. “We weren’t running it too well in the first half, but maybe we wore them down.”

Penn State coach James Franklin was asked if just that had happened.

“Nobody wants to hear me say that,” Franklin said. “But, yes, we were in a depth situation and a lot of guys who had not played much this season played a bunch. I wasn’t going to bring that up.”

Pittman was quick to point to Penn State’s key opt outs after the regular season as part of the issue. The Hogs had two notable losses.

"I do want to say that Penn State had six guys who went early (to the NFL)," he said. "We had two  (Burks and defensive end Tre Williams).

"I think it's pretty cool that Penn State wanted to play in the bowl game. Franklin is a wonderful person."

Five of the Penn State opt outs were on defense, including most of the team’s top tacklers. It didn’t seem to matter in the second quarter when the Lions scored twice to take the lead.

Pittman said he was “proud” of the second-half performance, noting his speech was delivered with positives.

“I don’t think we could have believed we could play that ugly in the first half,” he said. “We’d have to get better. I told them we were down 10-7 at half against Rice. You can make being down three points sound like 300.

“You should keep it real. We were going to get the ball to start the second half … it wasn’t the biggest deal. How we’ve been playing, we can dictate that.

“We needed to play better on defense. We had missed some tackles (in the second quarter) and we needed to swarm the ball.”

“It’s big,” he said. “I know it’s not the national championship, but to me it’s as big as that for me and our players. We’ve come a long way.”

That was Yurachek’s take, too.

“When you looked at that schedule this summer, I don’t think anyone would say we could win nine games,” Yurachek said. “I’m so proud of this team, this coaching staff and for Sam Pittman. They have all done a great job all season.

“You look at who is playing for the national championship, we played both of them. And, Ole Miss is another (loss) and is having a great season.

“What I see is a team that plays hard and respects each other. They trust their coach and their coaches trust them.”

Both teams wasted scoring chances in a sloppy first half. Penn State missed an opportunity when a sack forced a 50-yard field goal — well short — on the game’s first possession.

The Hogs drove to the PSU 11-yard line where Jefferson threw an interception on first down. After a scramble, Jefferson found Warren Thompson in the end zone but the pass was late and Ji'Ayir Brown dashed in front for the turnover.

That wasted the best running of the half for the Hogs. Dominique Johnson had gains of 33 and 8 yards after Jefferson found Morris for 21 yards.

Greg Brooks got it back for the Hogs two plays later when he intercepted Clifford at the Arkansas 42. After an exchange of punts, the Hogs got it back at their own 39.

Jefferson engineered a 13-play, 66-yard touchdown drive. Raheim Sanders, a Rockledge, Fla., product, scored on a 3-yard run on the final play of the first quarter.

The Hogs converted fourth-and-3 when Jefferson kept for 13 yards. They were lucky on a fourth-and-1 conversion from the PSU 5-yard line when Jefferson trapped an early snap against his stomach and handed to Sanders for 2 yards.

The Nittany Lions pinned the Hogs at the 10-yard line, then sacked Jefferson on third-and-10 to force a punt. Reid Bauer outkicked his coverage and an 18-yard return left only 42 yards.

The Hogs busted safety coverage on the first play and Clifford took advantage with a 42-yard bomb to an uncovered KeAndre Lambert-Smith on a post. Malik Chavis took an short receiver and Myles Slusher went to the outside. It was 7-7 at 10:53 of the second quarter.

The first half ended on failed trick plays by both teams. Penn State fired a pass into the end zone after faking a 54-yard field goal.

With 45 seconds left, the Hogs took possession at their 36-yard line. On second-and-3 from the PSU 37, Thompson was intercepted on a double pass. He badly overthrew Morris.

It all changed at halftime when the Hogs ran the ball seven straight times to take the lead.

"They committed to running the quarterback,” Franklin said. “They went with zone read on the perimeter, then they went zone inside where they were reading the linebacker. If he ran over the top with the running back, they pulled it and hit the quarterback inside. That was a major factor in the game.”

Jefferson seemed to find a new gear to accelerate into the secondary. He took on safeties, side stepped them or plowed straight through them. Pittman said the latter is a style that can’t be coached out of the quarterback.

“He goes left or right sometimes, but other times, he won’t,” Pittman said. “What do you say, (Jefferson has) got to make a statement sometimes. It was early in the Texas game and he had a chance to (make a safety miss) and he ran right to him.”

“Ty really did really did (give a spark),” Pittman said. “Ty has a sore shoulder, but he’s been valuable to us all year, whether it be center, guard or tackle.

“I thought he did an outstanding job. I’m happy he got to play.”

Clary and his line teammates made stars of Johnson (11 carries for 85 yards) and Sanders (13-79, 2 TDs). They all benefitted from Jefferson’s reads, but it was the quarterback runs that drew rave reviews from the backs.

“I watched him (on the big screen),” Sanders said. “KJ runs it like a running back. He goes at people. He does the same thing in practice, but no one can touch him. He can run you over or make you miss.”

Franklin saw both in the drive to open the second half.

“We missed him and he broke tackles,” Franklin said. “From that point on, we had a difficult time stopping the run.”