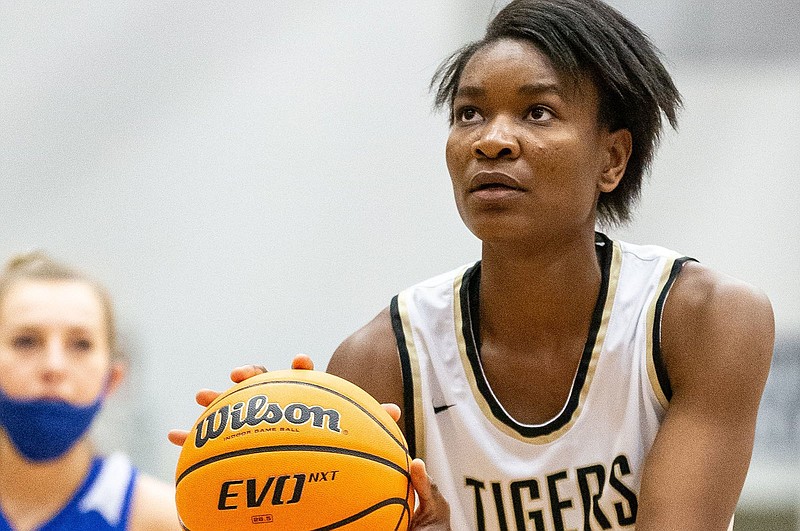 Bentonville’s Maryam Dauda is now one of four McDonald’s All-Americans on the University of Arkansas women’s basketball roster after committing to the Razorbacks on Friday. (Special to the NWA Democrat-Gazette/David Beach)

The 6-4 McDonald’s All American who starred at Bentonville High School was released to practice in December after recovering from knee surgery to repair a torn ACL suffered late in her senior season.

After talking with Dauda and her family, the decision to redshirt was the best thing for her, Neighbors said.

"When you sit down and look at all the data, we would've supported it any way she wanted to go, because it was close," Neighbors said. "As much as I would have liked to have had her (against Tennessee), you've got to see the big picture. These kids are young.

"They've got their full life ahead of them and we've all seen people who rush back and later in life it doesn't work out so well."

Neighbors said considering when the injury occurred, Dauda was definitely ahead of schedule in her recovery. And the intent was initially to redshirt when they started to recruit her again.

But when the Razorbacks' medical staff saw how well she was progressing, that is when talk began about her possibly playing this season, Neighbors said.

"It's not a surprise," Neighbors added. "We weren't counting on her, but it got exciting there for a little while. I think it's all positive. I don't think there's one negative out of the whole thing just except that we all want to see her play.

"We, as adults, can be patient and get a chance to see her play fully healthy."

Dauda will get the chance to get better each day in practice, Neighbors said. She and 6-2 UConn transfer Saylor Poffensbarger will both serve as assets the rest of the season even though they will not play.

"(Dauda) will get three months of being the other team's best player inside and that's a huge thing when it comes this time next year," Neighbors said. "She won't be your typical freshman."

Dauda initially signed with Baylor, but changed her mind and chose Arkansas after legendary coach Kim Mulkey decided to leave Baylor to coach at LSU. She was the 13th-ranked player and top-ranked post player in the ESPN HoopGurlz 2021 recruiting rankings at the time of her signing.

Dauda was a three-time all-state selection and finished her high school career as the leading scorer, rebounder and shot blocker in school history.

Neighbors also said 6-2 redshirt junior Erynn Barnum has not yet returned to practice and there is not yet a timetable for her return. Barnum, the team's leading rebounder, has missed the last five games with an undisclosed injury.