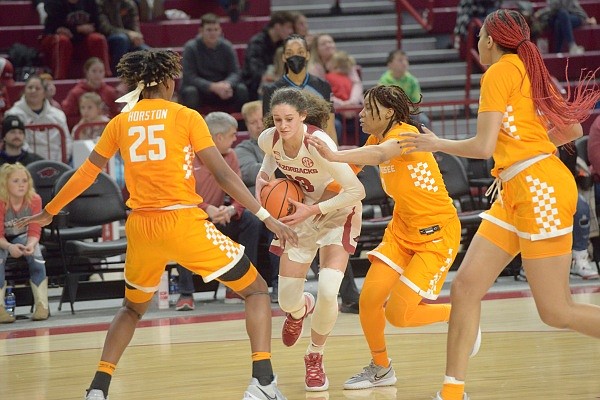 FAYETTEVILLE — The University of Arkansas women’s basketball team wiped out a slow start and led after three quarters, but No. 7 Tennessee took advantage of the Razorbacks’ foul problems with a big fourth quarter en route to a 70-63 win Sunday afternoon at Walton Arena.

The Lady Volunteers were aggressive, pounding the ball inside to 6-6 Tamari Key and taking advantage of a huge disparity at the free-throw line to take control in the final minutes of the Southeastern Conference game.

Arkansas Coach Mike Neighbors said falling into an 8-0 hole in the first two minutes was an issue, but his team rebounded and even led going into the fourth quarter. But ultimately the Lady Vols’ 23-9 advantage in made free throws combined with Arkansas going 8 of 40 from three-point range and five Razorbacks fouling out was the difference.

“The start was troublesome because they got in a flow right off,” Neighbors said. “Then I just thought their aggressiveness, their ability to continue to draw foul after foul after foul, that really mounts up on you and changes the way you have to play defensively and offensively.

“They really took it at us. We’ll have to really improve. We improved slightly over last year. They got 60 points in the paint last year, this year only 40. If you brought any of our kids in here and you showed them 8 for 40. They’d go, ‘Wow, we’re better than that.’ I’m not saying it. I think they would say that. I think that’s probably nerves. The first SEC game for some of them.”

But Tennessee (13-1, 2-0) got a turnaround jumper on the block from 6-2 freshman Sara Puckett and a three-point play by Key to push the lead back to five. Arkansas got no closer than three the rest of the way.

Ramirez scored a game-high 26 points, including five three-pointers. But Makayla Daniels was the only other Razorback in double figures with 11 before fouling out in the fourth quarter.

Tennessee Coach Kellie Harper said on a postgame Zoom call that her Lady Vols wore down their opponent like they have many other times this year.

Tennessee leads the nation in field-goal percentage defense (30.2%) and the long Lady Vols caused Arkansas issues, too. The Razorbacks made 23 of 76 shots from the floor for a season-low 30.3%.

The Razorbacks forced 20 Tennessee turnovers, but only turned those into 14 points. That’s a place where his team was unable to take advantage, Neighbors said. Arkansas was also unable to use its quickness advantage against the bigger Lady Vols.

“We should turn around and use that [quickness] on the other end,” Neighbors said. “If they’re going to be big and tall, then we should be little and fast and get a little bit more basket attack. To get out-shot for us from the free-throw line 36-11 is not characteristic for us, but that length has a lot to do with it.”

Key led five Lady Vols in double figures with 17 points, including 9 in the fourth quarter, to go with 7 rebounds and 5 block shots. Alexus Dye added 13 points and a game-high 10 rebounds. Jordan Walker chipped in 13 points, while Jordan Horston had 12 and Keyen Green 11.

The Razorbacks are scheduled to continue SEC play Thursday night at Vanderbilt at 7:30, then host Missouri on Sunday.