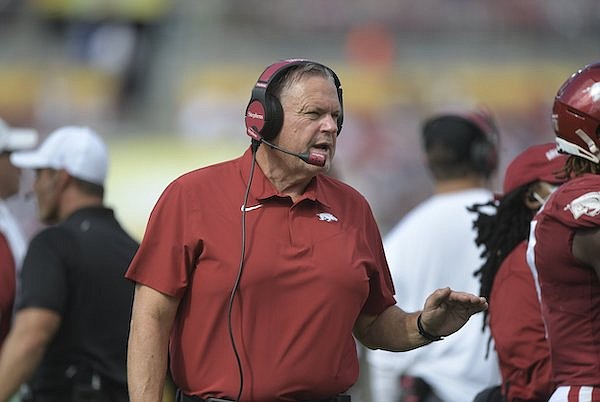 It’s a feel-good time for Arkansas fans following the 24-10 victory over Penn State in the Outback Bowl.

Frank Broyles always said, “They remember what you do in November.”

But Sam Pittman might add to that: “Happiness is as easy as counting to four.”

That’s the number of trophies the Razorbacks won in a 9-4 season in a climb to No. 21 in the final College Football Playoff ranking.

They did it with major contributions from several super seniors, part of a huge group that received a second senior year thanks to relaxed eligibility rules because of covid-19. The group included starters Myron Cunningham, Tyson Morris, De’Vion Warren, Blake Kern, Hayden Henry and Grant Morgan, and key reserve Ty Clary.

Those will be among the heavy losses the Hogs face in Year 3 under Pittman. The biggest is surely Treylon Burks, the junior wide receiver opting out on his senior season after earning first-team All-SEC honors.

But losing Burks should not be like 2015 when Hunter Henry, Alex Collins and Denver Kirkland left after their junior seasons. The Bret Bielema era peaked with the Liberty Bowl victory over Kansas State and things began to slide with the 50-50 call by Collins to move to the NFL. Kirkland, who would have anchored the 2016 line, surprised with his decision and he went undrafted.

There is little doubt that the key to the peak was the erosion of the Bielema coaching staff. His first-year staff after his move from Wisconsin was solid. But there were tough losses every year. Charlie Partridge and Chris Ash left after one season. Jim Chaney left after two and Pittman after three.

Bielema did not replace any with recruiters who matched their predecessor. Dan Enos picked the wrong quarterbacks. Rory Segrest (defensive line) and Kurt Anderson (offensive line) were plucked from the NFL with no reputations as either coaches or recruiters.

It’s in that area that Pittman’s leadership shines brightest.

There is little doubt that the ability to recruit is what Pittman covets most, but it appears his staff can coach, too. Playing hard is the essence of coaching. Seldom have the Hogs looked like they weren’t playing with top effort in Pittman’s first two years.

There is one other amazing sign that they can coach: the way the Hogs have dominated the third quarter this season. Halftime appears to be a time for winning adjustments under Pittman. It seems like Kendal Briles, the quarterbacks coach and offensive coordinator, gets it right in the third quarter more times than not.

The Hogs won the third quarter 17-0 in the Outback Bowl against Penn State. Briles made critical adjustments in the quarterback reads in the running game that torched the Nittany Lions in that third quarter.

Penn State coach James Franklin was quick to agree with a reporter’s thoughts about his team possibly running out of gas against the Razorbacks because of a depth issue related to five opt outs on defense. But there was a 22-minute break at halftime to rest that defense. I can buy a fourth-quarter juice problem, but not in the third quarter

It’s too early to know if there will be any staff changes this year. Pittman said he does not want any, but there can be surprises, sometimes not until after the February signing day. Next week’s coaches convention can produce movement, too.

There are positive signs for 2022 despite another tough schedule. The nonconference schedule with Cincinnati, BYU (in Provo), Liberty and Missouri State appears tough. Replacing Georgia with South Carolina as the SEC East swing game is a break, except the Gamecocks seem to be surging.

However, the Hogs still have talent and solid leadership. The two No. 1s, quarterback KJ Jefferson and safety Jalen Catalon, give Pittman bell cows on both sides of the football.

The defensive line needs continued development from the likes of Zach Williams, Isaiah Nichols, Taurean Carter, Eric Gregory and Jashaud Stewart, but the offensive line — losing only Cunningham at left tackle — should continue to improve.

Devin Manuel, Ty’Kiest Crawford and Jalen St. John provide hope that Pittman might soon have the kind of massive bulk that his past offensive lines featured. There are some O-line freaks in the incoming class.

Linebacker is the position that should be watched most closely. Bumper Pool has not announced his decision to return for a second senior season. Most expect him to come back and make a run at the school’s all-time tackle record.

Pool, although starting only once, led the team with 125 tackles this season. That gives him 349 for his career for the No. 8 spot at Arkansas.

Another possible candidate at inside linebacker might be Jayden Johnson. He started three games at nickel and made 24 tackles. He is listed at 6-2, 220 pounds and is still adding strength and bulk.

Pittman has said before that Johnson might grow into a linebacker. He’s got the speed coveted by coordinator Barry Odom for weakside blitzes.

There are some top linebacker prospects in the incoming class, including speedy Jordan Crook, the latest from a good linebacker factory in Duncanville, Texas.

But it’s unlikely Briles would rather have another quarterback for his offense. Jefferson is a fearless runner and great with the deep pass. When healthy, he can channel his inner Cam Newton and smoke safeties with dashes through the middle.

Where Jefferson is now as the ultimate playmaker in a run-pass option offense is exactly what was predicted when old friend Dave Rader watched an August 2019 practice. Rader was a head coach at Tulsa and worked under Bill Parcells with the New York Giants. He coached quarterbacks at Alabama, Mississippi State and Ole Miss.

“Jefferson is a generational talent at quarterback,” Rader said while watching the then true freshman. “If you don’t think he looks a lot like Cam Newton, then I question your judgment. If he can develop some touch on the deep pass — he’s got the arm — I suspect he’ll be a great one.

“I wouldn’t want to try to tackle him in the open field. He is going to splatter some defensive backs.”

No one knew what kind of leader Jefferson might be, but he’s got that quality, too. His teammates love him and respect his decisions on and off the field. Catalon carries the same kind of weight with the defense.

I like the rest of the backs on both sides of the ball, although cornerback will need continued development after the loss of Montaric Brown.

The offensive backfield will be a strength with Dominique Johnson, Raheim "Rocket" Sanders and AJ Green. Signees Rashod Dubinion and James Jointer are great prospects, too.

There is solid talent at wide receiver and more speed on the way with Isaiah Sategna, among others. Special teams were improved this year and kicker Cam Little could be a preseason all-star candidate.

It’s a cliché, but it’s a good time to be around Arkansas football. Most sports at Arkansas are doing well, but when football is good, money flows and the entire program benefits.

The state has been starved for good football for many years since the move to the SEC in 1992. Pittman knows the history. Asked if it was a meaningful bowl victory and a meaningful season, Pittman was quick with a positive answer.

Later, Pittman added, “To be Outback champions with nine wins, I’m really proud of our team with what we accomplished. Two of the teams that beat us (Alabama and Georgia) also were pretty good (in the playoff semifinals).

“We play in a heck of a league. I said a long time ago, we’re in the SEC West, right where Arkansas belongs, and we are starting to prove that.”

Pittman knows there are more trophies to be won. When the Hogs can win their first SEC championship has not been discussed, but it no longer seems farfetched. The tumble through college football’s abyss is over.