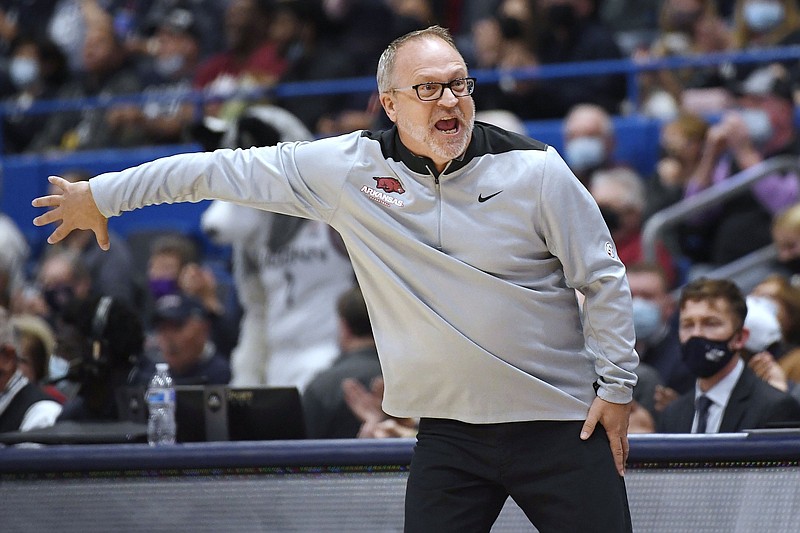 With six inches of snow on the ground in Nashville, the University of Arkansas women’s basketball team never warmed up against Vanderbilt on a wintry Thursday evening in Memorial Gymnasium.

The Commodores limited the Razorbacks to a season-low 28% shooting and held on for a 54-51 Southeastern Conference victory.

Arkansas (10-5, 0-2 SEC) never led and struggled against Vanderbilt’s pressure defense the entire evening. The Razorbacks had a last chance to tie on Makayla Daniels’ three-point attempt from the top of the key in the waning seconds. But it was off the mark as the horn sounded.

Despite his team’s late rally, Razorbacks coach Mike Neighbors said the Commodores (11-4, 1-0) jumped out quickly and never really let up.

“They were ready for us. I thought they exploded with it,” Neighbors said. “That was the start of it and then it was catch-up from that point on and we just never quite could get that big run to get close enough to make them uncomfortable.

Arkansas sliced an eight-point deficit to 51-49 on Sasha Goforth’s layup with 26.6 seconds left. But Vanderbilt sandwich a pair of 1-of-2 efforts at the foul line around a pair of Arkansas misses inside to push the lead to four.

Daniels scored quickly to pull the Razorbacks back within 53-51 with 10.4 seconds remaining, but Brinae Alexander could manage just 1 of 2 free throws to give Arkansas a shot in the final seconds.

Daniels’ shot was off the mark and the Commodores celebrated their first SEC win of the season.

Arkansas was again ice-cold from three-point range for the second consecutive game and also couldn’t get to the free-throw line. Those are two categories that the Razorbacks usually excel in, but not lately.

Arkansas has now made just 17 of 73 (23%) from beyond in the arc to begin SEC play. By comparison, the Razorbacks are shooting 35% as a team for the season. They also equaled their season average of 11 turnovers, but eight of those came in the first half.

Neighbors said Vanderbilt’s defensive intensity was the difference on Thursday.

“We were off-balance. We were throwing it all over the place. … I think their defense just dominated us, got us to the point where we weren’t able to take advantage of the fact they didn’t really have a rim-protector. They don’t have anybody that blocks shots, but they did great job team defensively."

Goforth registered a double-double with 17 points and 11 rebounds — both game highs. Senior Amber Ramirez chipped in 15 on five three-pointers. No other Razorback reached double figures as Daniels, the team’s leading scorer, was limited to seven on 2-of-14 shooting.

Vanderbilt led by as many as 11 midway through the third quarter, but Arkansas finally got going behind Goforth and Ramirez. Goforth’s bucket capped a 9-2 Arkansas run to get the Razorbacks within 42-39 with 1:11 left in the third.

The Razorbacks struggled early, turning the ball over eight times in the first two quarters and shooting just 26% from the floor (9 of 34).

Vanderbilt led by as many as 10 in the half at 29-19, but Elauna Eaton drained back to back three-pointers to get Arkansas within 29-25. Alexander scored 11 first-half points to help the Commodores get going and lead 29-25 at halftime.

Arkansas continues league play by hosting Missouri on Sunday. Tip-off is scheduled for 2 p.m. Missouri had to rally to defeat Auburn 72-63 in overtime on Thursday.