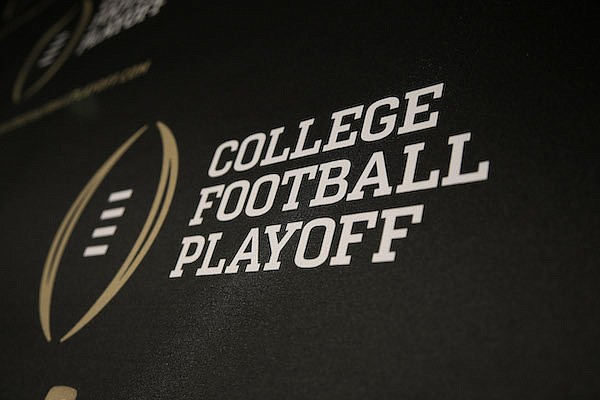 The College Football Playoff logo is printed across a backdrop used during a news conference where the 13 members of the committee were announced, Wednesday, Oct. 16, 2013, in Irving, Texas. (AP Photo/Tony Gutierrez)

It was late in the afternoon on Nov. 13, 2015, when news from more than 4,000 miles and an ocean away reverberated inside the SEC’s headquarters in Birmingham, Ala.

A bomb had gone off just outside Paris’ Stade de France after a terrorist was denied entry to a friendly soccer match between France and Germany — later revealed as the first in a series of coordinated attacks that killed 137 in the French capital that night.

Byron Hatch was mere days into his time with the SEC as the assistant commissioner for championships, tasked with spearheading operations for the league’s football title game. Hatch knew when he’d taken the job that he would only have about a month to prepare himself for his first time running college football’s preeminent championship game.

By the end of that day, Hatch knew that he was dealing with a whole new challenge in 22 days until the SEC’s East and West champions walked into the Georgia Dome.

“He’s unflappable,” former University of Arkansas athletic director Jeff Long said of Hatch, who worked for Long and the Razorbacks from 2012-15. “It doesn’t matter what the situation is, how high-stress it might be. He is calm, he is cool under pressure and he delivers.”

Hatch will take the next step at the end of January when he departs the SEC to become the College Football Playoff’s chief operating officer, a role in which the the University of Central Arkansas graduate and University of Arkansas-Little Rock William H. Bowen School of Law alumnus will oversee all operations for the national championship game.

Go back 20 years to when Hatch finished law school, and he’d have admitted that he “had no clue what he wanted to do professionally.”

“Like a lot of kids, I grew up adoring the Razorbacks,” said Hatch, a native of tiny Humphrey. “I always thought that one day I was going to be a Razorback football or basketball player.”

Although that athletic path never opened, Hatch did have some interest from Hendrix College. He chose to focus on academics instead, getting his undergraduate degree at UCA in 1998 before immediately going to law school.

Hatch went into tax law for four years, yet he was never satisfied. So while living in Houston, he volunteered in Texas Southern’s compliance office before taking a job at the NCAA in 2005.

From then through 2012, Hatch worked out of the NCAA’s headquarters in Indianapolis, first with academic and membership affairs and then with championships, particularly the men’s basketball tournament.

Long first met Hatch during that time, and once Long got indications that Hatch wanted to return to a college campus, the then-Arkansas AD carved out a role where Hatch could make the most of his law degree and business accounting background in Fayetteville.

“I love Byron Hatch,” Long said. “There’s not a negative bone in Byron’s body. He has the ability to look at a difficult situation and then find a positive and move to [it] without dwelling on the negatives … and push us to where we needed to be.”

Hatch eventually realized he preferred to be a part of an organization rather than an institution, so after three years with the Razorbacks, he moved to the SEC, leading the football and men’s basketball championships.

Between the terror attacks that first year in 2015 and then the transition from the Georgia Dome to Mercedes-Benz Stadium in 2016, there was plenty to deal with from the start.

“[His hiring] was an accumulation of a relationship well over a decade long, his experiences and then me looking ahead at what we faced,” SEC Commissioner Greg Sankey told the Arkansas Democrat-Gazette. “We don’t have the luxury of just showing up at an event. It is literally a year-long plan from the moment an event ends until the next year, [and] Byron has been immersed in that preparation.”

In many ways, Monday night’s championship game is a fitting occasion to kick off the next step in Hatch’s career — even though he won’t be in charge until next year’s contest, slated for Jan. 9 at Los Angeles’ SoFi Stadium.

Monday’s title game will be played at Indianapolis’ Lucas Oil Stadium, 1.5 miles from the NCAA offices where Hatch formally began his athletics administration adventure more than 16 years ago.

“You can’t make this stuff up,” Hatch said. “A lot of people looked at me like I was crazy for leaving accounting to go work in athletics, and I took a pay cut to do that. … But I felt like it was my calling, my God-given purpose and the old cliche, ‘Find something you love to do, and you never work a day in your life?’ That’s right.”