Best of Razorback football in 2021 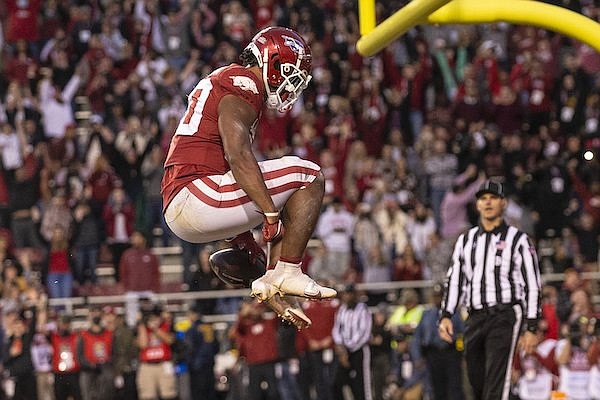 Arkansas running back Dominique Johnson celebrates his go-ahead touchdown run during the fourth quarter of a game against Mississippi State on Saturday, Nov. 6, 2021, in Fayetteville.

FAYETTEVILLE — The 2021 Arkansas Razorbacks will be remembered as the team that firmly restored respect to a program that had suffered through five extremely difficult years and a decade of not contending in the brutal SEC West.

Under second-year Coach Sam Pittman, the University of Arkansas started 4-0, lost three in a row, then rebounded with five wins in their last six games, capped by a comfortable 24-10 victory over Penn State in the Outback Bowl.

An Arkansas program that had won seven games in the prior three years posted its first nine-win season since the 2011 team went 11-2 and won the Cotton Bowl, and won its first New Year’s Day game since the heralded 1977 team upset No. 2 Oklahoma 31-6 in the Orange Bowl.

“To me it’s as big as you can get to our players,” he said when asked what he was feeling as he received the Outback Bowl trophy. “We’ve come a long way. We are really pleased of how the Arkansas people followed us here, the folks. I know they spent their hard-earned money to get out here. We’re so appreciative of that.

Pittman made a big deal out of winning the team’s trophy games and the Razorbacks responded.

Arkansas downed Texas A&M 20-10 to take home the Southwest Classic Trophy after a nine-year losing skid. The Razorbacks brought home the Golden Boot from Baton Rouge with a 16-13 win in overtime at LSU to snap a five-game losing streak.

The streak was also at five games when Arkansas reclaimed the Battle Line Trophy away from Missouri with a 34-17 home win to cap the regular season.

All four trophies spent time on the floor of the Fred Smith Football Center to show the blue-collar Razorbacks were a grounded team.

Morgan took home a national award, the Burlsworth Trophy, as the first Razorback to win the award, given to the nation’s top player who began his career as a walk on, named after former Arkansas All-American Brandon Burlsworth of Harrison.

Punter and holder Reid Bauer also claimed a national honor by winning the Mortell Award given to the country’s top holder.

And now on to the best and worst of Arkansas football in 2021:

Texas A&M was coming off a No. 5 ranking the previous season with a loaded roster and a coach in Jimbo Fisher who ranked among the highest paid in the game.

The Razorbacks turned in a dominating defensive effort by holding the Aggies to 272 yards, and KJ Jefferson dropped a perfect 85-yard pass into Treylon Burks for a game-changing score late in the first quarter. Arkansas held on after redshirt freshman quarterback Malik Hornsby replaced the injured Jefferson for 20 plays midway through the second half, leading a key field goal drive after Montaric Brown’s interception off a Zach Calzada pass tipped by Bumper Pool.

The 37-0 shutout at No. 2 Georgia was demoralizing after the Razorbacks had surged to No. 8 in The Associated Press Top 25, but the worst loss actually came two weeks later with a 38-23 home setback against Auburn.

The Razorbacks looked flat in their seventh consecutive game, which came after a 52-51 slugfest loss the previous week at Ole Miss. The loss kept Arkansas from having its first unbeaten season at home since a 7-0 mark in 2011.

Quarterback KJ Jefferson seemed a step slow after a huge workload the prior week at Ole Miss.

The scoreboard was more lopsided in a couple of other games, but running for 333 yards and having all four tailbacks — Trelon Smith, Dominique Johnson, Raheim Sanders and AJ Green — score rushing touchdowns in a 40-21 rout of then-No. 15 Texas in Week 2 sure felt dominant for Razorback fans in the early “welcome” of the Longhorns to the SEC.

KJ Jefferson was right on the money to Warren Thompson crossing at the back of the end zone to score a 9-yard touchdown on the final play of regulation at Ole Miss and pull the Razorbacks within 52-51.

Treylon Burks made his usual array of fantastic grabs, but this honor goes to freshman tailback Raheim Sanders for his falling 17-yard touchdown against blanket coverage in the left corner of the end zone with 1:02 left at No. 2 Alabama. Sanders got his hands under the ball as he hit the turf, which the replay official observed in allowing the touchdown call on the field stand to pull Arkansas within 42-35.

Texas safety BJ Foster had the angle on Raheim Sanders, who broke a cut-back across the field toward the left sideline. But Sanders would not be denied, powering into the end zone with Foster just trying to hang on to cap a 26-yard touchdown. The score came on the next snap after Zach Williams’ strip-sack of Hudson Card was recovered by Greg Brooks Jr., and it gave Arkansas a 33-6 lead late in the third quarter.

Treylon Burks caught an innocent-looking screen pass on the left edge and turned it into gold. Burks got strong blocks on the perimeter from Blake Kern and Tyson Morris after making the catch on the 7-yard line, then the 6-3, 225-pound speedster stiff-armed a defender and outran everyone for a 92-yard touchdown against Georgia Southern in Week 3.

AJ Green caught a short flare around the left edge, skipped out of an ankle tackle try, spun around another defender then benefited from Aaron Hansford’s push to score a 49-yard touchdown for a 17-0 lead over Texas A&M.

KJ Jefferson shook out of what looked like a sure sack by LSU linebacker Damone Clark and turned it into a game-changing play. Jefferson scrambled along the line for another few seconds after avoiding Clark, then spotted tailback Dominique Johnson alone inside the Tigers’ 20. Johnson made the catch at the LSU 18 and turned it into a 43-yard touchdown when the moving was tough.

Cornerback Montaric Brown made several crucial interceptions, like his diving grab against Texas A&M, but his most important was a textbook play in the end zone at LSU. Brown turned perfectly with inside position and grabbed Garrett Nussmeier’s fade pass in overtime to set up Cam Little’s game-winning field goal in a 16-13 win.

Greg Brooks Jr. soared to defend a throw by Penn State quarterback Sean Clifford near midfield and came down with a magnificent interception. Brooks managed to get his right hand on the slight under throw for tight end Brenton Strange and flicked it back to himself on the descent. Brooks snared the deflection with his left hand and cradled it before Strange took him down.

Texas A&M could not stop Tre Williams on Sept. 25 at AT&T Stadium. The Aggies used multiple players at left tackle, including highly regarded Kenyon Green, but Williams rampaged for three sacks, and he also had three holding calls against him, one of which was declined. Williams earned SEC Defensive Lineman of the Week and the Bednarik Award National Player of the Week for his performance.

KJ Jefferson engineered a 10-play, 75-yard march for a go-ahead touchdown with 21 seconds left in the game after Mississippi State had taken a 28-23 lead with 2:22 left. Jefferson went 6 for 7 for 45 yards on the series and also had a 5-yard scramble to set up Dominique Johnson’ 4-yard touchdown run in the 31-28 victory.

That would be “Larry” the bowling ball. Sure, it was corny, but Sam Pittman rolled a strike through the parted team after the Razorbacks outlasted Mississippi State 31-28 to clinch bowl eligibility. Larry held an exalted place in the trophy case, at least for a while, as the Razorbacks accumulated their four trophies this season.

Cam Little’s longest field goal of his freshman season was also one of his most important. Little drilled three field goals of 46-plus yards in the 31-28 win over Mississippi State, the last one a 51-yarder to give Arkansas a 16-14 lead late in the third quarter. Little went 3 for 4 on field goals in the game, in contrast to the Bulldogs’ 0 for 3, which caused Coach Mike Leach to call for open tryouts for kicker.

Little had a phenomenal freshman season but he missed a 37-yarder, tantamount to a chip shot for him, at the end of a 12-play drive that reached the Georgia 20 early in the second quarter. The miss would’ve been a drop in the ocean in a lopsided 37-0 loss to the Bulldogs for the then-No. 8 Razorbacks, but it would’ve dodged a shutout.

Holder Reid Bauer and tight end Blake Kern combined on a 32-yard touchdown pass on a fake field goal at Alabama that drew the Razorbacks within six points at 34-28 early in the fourth quarter.

Kern made an extraordinary one-hand catch on Bauer’s jump pass, which he recreated on his humorous video after winning the Mortell Award as the nation’s top holder. Alabama Coach Nick Saban said they had the trick play sniffed out, but a defender got screened by an official. It all played into the Hogs’ hands for one of their funnest plays of the season.

Arkansas trailed 14-0 at No. 2 Georgia and was backed up at its 8-yard line, when the Bulldogs sent a punt rush the Razorbacks had not seen, overloading a gap. Dan Jackson flew in to block Reid Bauer’s punt and Zamir White recovered in the end zone for a touchdown to send the Sanford Stadium crowd into a frenzy.

The Razorbacks sent pressure on a fourth-and-3 pass play against LSU freshman quarterback Garrett Nussmeier with about six minutes remaining in a 13-13 game. Nussmeier had a miscommunication with receiver Trey Palmer and threw behind him as Palmer collided with Myles Slusher on the incomplete pass from the Arkansas 38. A conversion there would have put the Tigers into field-goal range for strong-legged Cade York in a game Arkansas won 16-13 in overtime on Cam Little’s 37-yard field goal.

Penn State quarterback Sean Clifford was trying to pick his way through the right side of the line when Arkansas linebacker Bumper Pool shot a gap and blew him up at the end of a 2-yard gain late in the third quarter. Pool got up and nodded his satisfaction after the hit, which came just after the Razorbacks had taken a 24-10 lead that would wind up as the final score.