Transfer portal spinning out of control 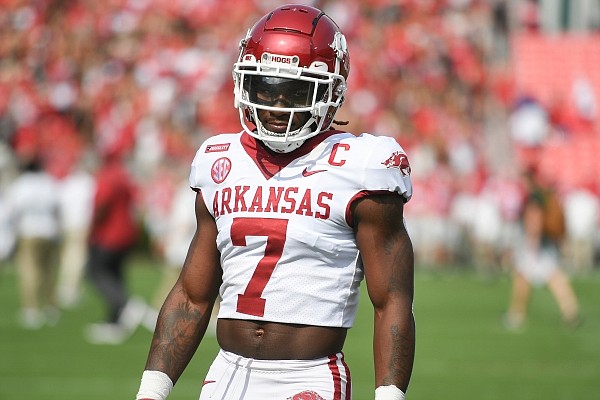 Arkansas defensive back Joe Foucha looks on Saturday, October 2, 2021 during a football game at Sanford Stadium in Athens, Ga.

So, let me get this straight.

Caleb Williams, who took over at quarterback as a freshman and prompted the former starter to leave the team, says he's entered the transfer portal but could eventually decide to stay at Oklahoma. Is that what I'm hearing?

From my perspective, that's like me telling my wife I'm going out to the club to search for someone else and that I'll return to her if I can't find anyone new. I am 100% certain my wife would tell me to hit the road, Jack, and just keep going.

Which is exactly what Oklahoma should tell Mr. Williams, who apparently isn't satisfied with being the starting quarterback at one of the nation's top college football programs.

I hate the transfer portal, I really do.

Initially, I thought the transfer portal was a good idea, especially for players who were stuck down the depth chart and only wanted a chance to play. But even top players in the college game are moving on and switching teams at a dizzying pace that's difficult to keep up with.

And what's up with Bo Nix, who left the school where his daddy played quarterback to spend his final year at Oregon, where he threw his first touchdown pass as a true freshman in 2019. Doesn't loyalty and commitment mean anything anymore?

What a mess free agency has done to college football. What an absolute mess.

The issue of "pay for play" has been around for years, especially as college programs and their coaches began to benefit greatly financially off the work of college athletes. Kareem Abdul-Jabbar, a basketball Hall of Famer and social activist, suggested during a speech at the University of Arkansas a few years ago that a money pot should be established from which all the student-athletics on campus could withdraw. That hasn't happened. Not even close.

College football, especially, has grown into a big business. But isn't the primary reason for going to college is to get an education, even for hotshot athletes who are one serious injury away from having their careers ended?

Arkansas fans should be celebrating and looking forward to next season after the Razorbacks finished 9-4 with a bowl victory in 2021. But the transfer portal is the No. 1 topic after several players, including defensive backs Greg Brooks Jr., and Joe Foucha and quarterback Malik Hornsby, announced they were leaving. Arkansas will look for replacements -- you guessed it -- in the transfer portal.

Which brings up another point. Shouldn't scholarship players who leave have to pay back some of the money it took to recruit them? That would certainly slow down the rush to leave.

I'm convinced how folks feel about the current state of college athletics falls along generational lines. Old folks like me don't like the idea college athletes can pretty much come and go as they please without repercussions. Much younger folks like the added freedom for college athletes in making decisions, regardless of the time and effort it took for college sports programs to get them on campus in the first place.

Just last week, I heard a couple of guys on the radio say businesses who support Razorbacks athletics need to do a better job of enticing and keeping players with more attractive NIL (Name, Image, and Likeness) agreements.

Is that what we want for college football, bidding wars for scholarship athletes who are already receiving a free education? If so, then count me out.