Get used to SEC dominance; it's only going to get stronger 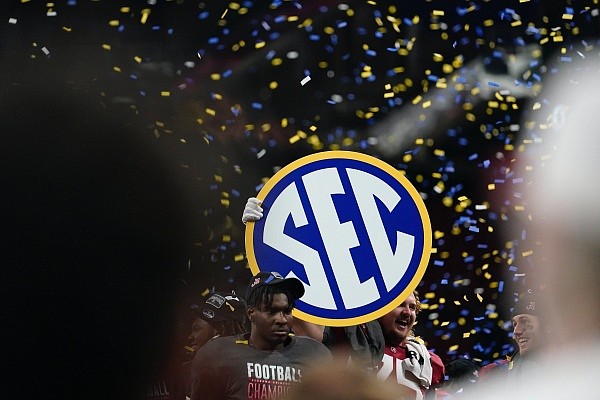 This column is a public-service announcement to all of you college football fans who are sick and tired of seeing the Southeastern Conference dominate your sport.

It's for all of you who think watching Alabama and Georgia playing for the national championship on Monday night in a rematch of the SEC Championship Game is bo-o-o-o-o-o-o-ring!

It's for all of you who are fed up with seeing SEC teams win 11 of the last 16 national championships and Saban's Cyborgs playing for the championship almost every year and winning it six times in the last 12 seasons.

It's for all of you who have had it up to HERE with the SEC getting the best recruits, producing the most NFL draft picks and drawing the most fans.

I have four simple words of advice, and if you heed them it will significantly lower your blood pressure:

Get used to it.

Cathy brings the same service-focused mindset to her career as a financial advisor as she did as a Second Lieutenant in the Air Force. Find out how a commitment to serving others and a sense of entrepreneurship inspires her in her role today.

Because it's only going to get worse.

The SEC's dominance will become even more unmistakable in the next few years when Texas and Oklahoma join the league, a new TV deal kicks in and SEC programs are able to outspend athletic departments from other conferences even more than they do now.

Don't ask me how and why the SEC has become the iron-fisted king of college football, but it irrefutably and indisputably has. There are some who believe SEC football dominance stems from the South's loss to the North in the Civil War. They claim that the Rebels' defeat in the Civil War created a historic chip on the shoulder of southern universities, and this is why SEC schools so adamantly pursued excellence in college football — because it gave them a chance at a symbolic rematch with those "damn Yankees." In 1935, the SEC became the first conference to offer athletic scholarships, which outraged Harvard, Yale and the other hoity-toity institutions of higher learning in the Northeast.

"The Civil War had crushed the ego of the South," writes author Ray Glier in his book "How the SEC Became Goliath. "The North was more urbanized and industrialized. It's why the North won the war and the South wanted to raise the level of its game. ... Football was part of the formula. ... The South finished second once before. Ever since it has been determined to finish first."

I don't know if I'm buying all of that, but I do know the SEC's official mantra — "It Just Means More" — is absolutely true. The SEC has the most passionate fans (the largest average attendance in college football for 23 straight years), the best players (the most overall NFL Draft picks for 15 straight years) and — most importantly — the biggest bank accounts.

According to the latest figures compiled by USA Today, 10 of the 20 biggest revenue producers in college athletics come from the SEC. When Texas and Oklahoma join, it'll be 12 of 20.

And the financial chasm between the SEC and the rest of college football is about to become Grand Canyon-like. Right now, the Big Ten actually distributes more money to its members ($54.3 million annually per school) than does the SEC ($45.5 million), but that's about to change dramatically.

The SEC signed a new $300 million deal with ESPN last year that gives the network rights to all SEC football games starting in 2024. The new deal is expected to increase the conference's annual distribution to its members to about $70 million per year. And that deal was negotiated without Texas and Oklahoma being involved. It's not out the realm of possibility that an amended TV deal involving Texas, Oklahoma and added inventory from an expanded nine- or 10-game conference schedule could net each SEC team $80 or $85 million per year.

For argument's sake, let's say the SEC by 2025 is distributing $80 million per year to each of its member institutions (yes, Vanderbilt, even you get $80 million). If you're scoring at home, Florida State and Miami fans, that means your programs will be earning about $31 million per year from the ACC television package while the University of Florida is earning $80 million.

If my math is correct, that means the Gators will have nearly half-a-billion dollars ($490 million to be exact) more to spend on their program over a 10-year period than the Seminoles and Hurricanes. You can build a lot of palatial facilities, hire a lot of quality coaches and fund a lot of NIL initiatives with an extra half-a-billion dollars. And if/when it gets to the point where college programs directly pay their athletes, the Gators will have a payroll like the New York Yankees while FSU, Miami and UCF will have payrolls like the Miami Marlins.

If you think the SEC is dominating college football now, just you wait.

With even more money, more resources, bigger recruiting budgets and more television exposure, the SEC's power and preeminence is about to soar to unprecedented heights.

Get used to it.