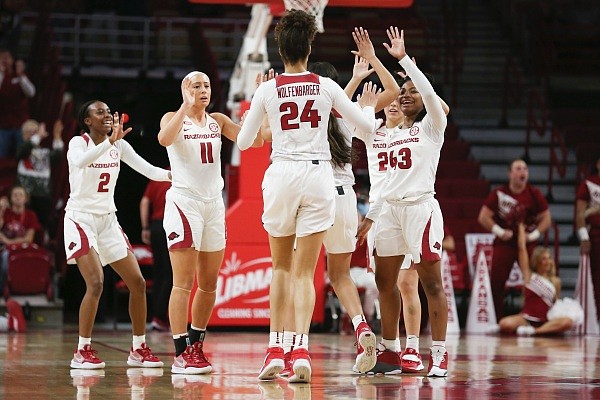 Arkansas players high five on Sunday, Jan. 9, 2022 during a basketball game at Bud Walton Arena in Fayetteville. Check out nwaonline.com/220110Daily/ for the photo gallery.

FAYETTEVILLE — Arkansas women’s basketball coach Mike Neighbors said his team backed up talk with action Sunday afternoon at Bud Walton Arena, and the result was the Razorbacks’ first SEC win of the season.

Neighbors added the Razorbacks’ soul searching following a 54-51 loss at Vanderbilt on Thursday showed up on the floor throughout practice in the days that followed and led to an 83-73 win over Missouri in front of a crowd of 3,632.

“We did a lot of talking on the way back from Vanderbilt, and talk is cheap. But when they put it into action like they did in practice and carried it over to a game, that is a sign we are growing up,” Neighbors said.

“We took our punches. We learned some valuable, valuable lessons. I know I did as a coach. I know they did individually. We got a few things fixed, not everything. We've still got a lot more work to do, but I've got to feel like that was one of our best efforts of the season.”

The Razorbacks (11-5, 1-2 SEC) placed five players in double figures, including a career-high 17 points from Rylee Langerman off the bench, to snap a three-game losing streak. They never trailed after the first four minutes and ended Missouri’s five-game winning streak.

That streak included a win over top-ranked South Carolina 10 days ago.

Freshman Jersey Wolfenbarger, who was celebrating her 19th birthday, got back-to-back stickbacks to push the Razorbacks’ lead back to double figures, and Arkansas made 10 of 12 free throws in the final 1 minute, 37 seconds to seal the deal.

Amber Ramirez, the lone senior on the Arkansas roster, finished with a team-high 21 points and topped the 1,000-point career point mark as a Razorback late in the game. But she had plenty of help offensively. Langerman and Makayla Daniels chipped in 17 points each, Wolfenbarger added 11 and Sasha Goforth 10.

Neighbors has lauded Langerman for her myriad of contributions this season despite averaging just 2.7 points per game entering Sunday. But the 5-9 sophomore from Norman, Okla., had a career performance offensively, making 5 of 6 threes and 6 of 10 field goals.

Neighbors did not really have an answer for her offensive explosion except maybe some added confidence from sinking her first four threes.

“She’s had people try to give her confidence,” Neighbors said. “Nobody can give you confidence. Something good has to happen. I think she made that first one, she caught it, she shot it, didn’t think about it. Then the next one, then the next one. Then it was like, ‘Is this going? Is this one going?’

“Here’s what I love about her: even though she was making shots, she continued to do those other things, too.”

Langerman came up with a big play that won’t show up in any stat column. After Missouri pulled within nine in the fourth quarter, she tipped the ball a number of times to keep it alive in a sequence of multiple misses by the Razorbacks that ultimately ended with Wolfenbarger scoring.

The Razorbacks shot almost 44% from the floor (27 of 62) and 11 of 27 (41%) from three-point range after a season-low 28% performance at Vanderbilt. They also committed just two turnovers — a program record — after also struggling in that area against the Commodores.

Ramirez, who also made 11 of 12 free throws, said a little more work in practice and more energy helped their confidence surge.

Neighbors said redshirt freshman Elauna Eaton, who was scoreless in just under nine minutes of action, did not play in the second half after getting ill at halftime.

Frank led all scorers with 22 points for Missouri. Mama Dembele added 16, while Aijha Blackwell, the team’s leading scorer, added 11 points and 14 rebounds for her 11th double-double of the season.

Arkansas is not scheduled to play again until next Sunday against No. 1 South Carolina. Tip-off time for the game in Bud Walton Arena has been shifted to 2:30 p.m. since it will be shown on the SEC Network.