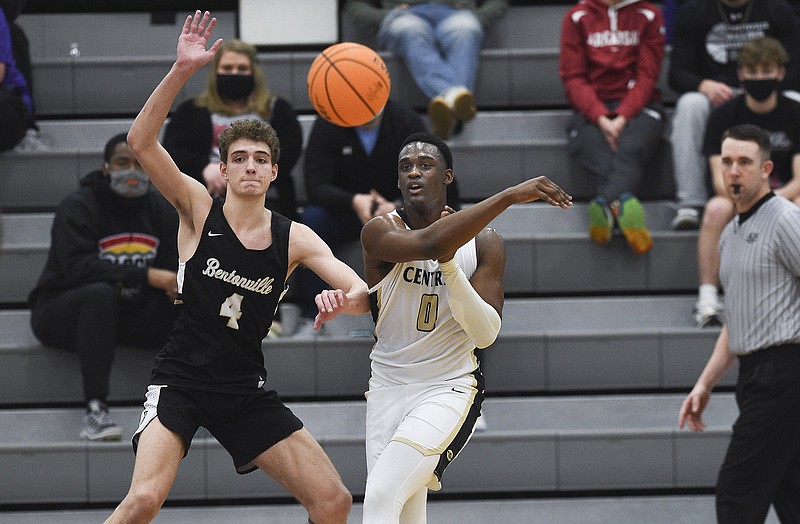 Bentonville sophomore center Caden Miller has an old school game that is beginning to blossom.

Miller, who has scholarship offers from Mississippi State, DePaul and UCA and interest from Arkansas and others, used a variety of inside moves to lead the Tigers (11-4, 1-1) to victory in a contest that doubled as a 7A-West league game.

“Tonight was really like the most offensive game that I have had this year,” Miller said. “But that was our goal, and if I get it in the middle and they come to me, I would pass it out and if not, I would get an easy lay up. That was really our game plan and we worked on it all week.

“The guys set me up perfectly in the post, they were feeding and it was building my confidence.”

Miller, who has a 36-inch vertical jump, showed off a repertoire of post moves, including a variety of fakes and angles reminiscent of the up-and- under game of former Boston Celtics star Kevin McHale.

“I take a lot of pride in my post game and I really got to show it,” Miller said. “I think I am going to be doing that a lot more now. I work on it all the time, not all the time, but a lot, and now I am getting a chance to show it.”

“It is something that I just really like to do,” Miller said. “I usually don’t get to do it out here, but the guys they just made the entry passes and set me up really good lately. Them just having faith in me really meant a lot to me.”

Miller played his AAU basketball for Arkansas Flight last spring and summer, but will be joining Bradley Beal Elite in 2022.

Miller, who was born in Fayetteville, was actually on the Arkansas campus for an unofficial visit when Smith was taking his official visit.

“It was really cool and just a great environment,” Miller said. “I got to watch a practice and it was so fast-paced. It was just really cool to be there and be a part of it. Just being able to watch it was a great experience.”

Miller likes what he sees from Razorback head coach Eric Musselman, who led his program to its first NCAA Tournament Elite Eight appearance in 26 years in 2021.

“I think Musselman is great,” Miller said. “I really love the energy because I am a big energy guy. He is like a bright light and I think it would be really cool to play for him. He is a really great guy and takes pride in connecting with his guys.”

Bentonville coach Dick Rippee noted that Miller has been solid defensively even as as offense has been coming around.

He was also named the MVP after Bentonville went 3-0  in late December in the KSA Events Boys Holiday Basketball Tournament in Kissimmee, Fla.

"Caden changes things around the rim, no question, for us,” Rippee said. “He's really been good defensively, even last year as a freshman, and he's an unbelievable rebounder. Coming into this game, he's averaging 10.5 a game. He's done a great job being a rim protector and allows his teammates to put pressure on players."

Bentonville’s tough non-conference schedule included wins over Marion and Maumelle, three victories each in the Florida and Blue Springs tournaments and losses to Jonesboro, Little Rock Central and Memphis Bartlett.

Bentonville hosts Rogers Heritage on Tuesday and Fayetteville on Friday in its first home games of the season.

Miller is expecting to have a spirited crowd as the Tigers did as the visitors at Bentonville West this past weekend.

“Our whole goal was just to have energy and play for each other and the team,” Miller said. “That is our big thing - team, team, team - and we did that. The student section helped, the parents helped, everyone helped and we just had a lot more energy.”