Nevada forward is high on the Hogs 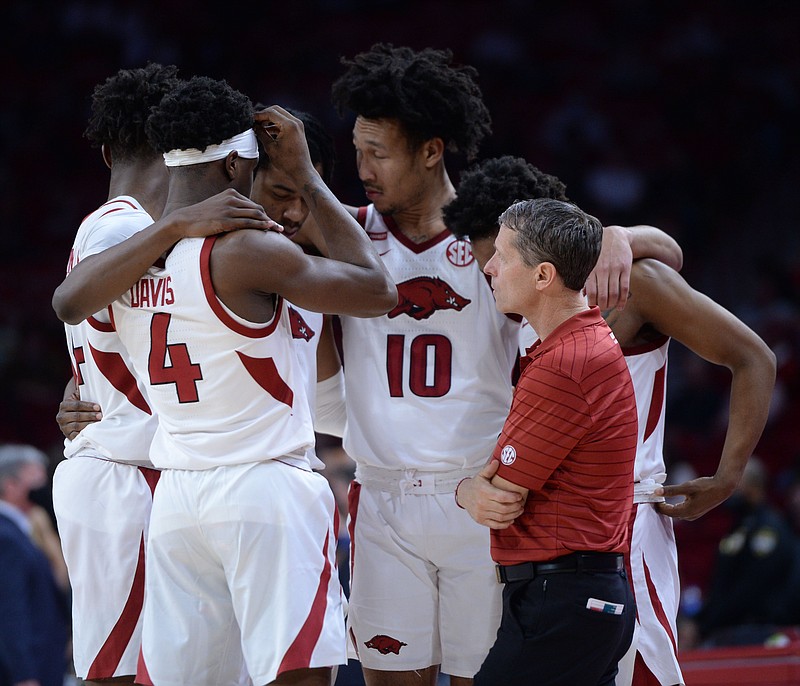 Arkansas coach Eric Musselman speaks to his team during the second half of the Razorbacks' 75-74 loss to Vanderbilt on Jan. 4 in Bud Walton Arena in Fayetteville. - Photo by Andy Shupe of NWA Democrat-Gazette

ESPN 4-star junior power forward Osiris Grady got his first look at the University of Arkansas during an unofficial visit on Sunday while in the area for a basketball tournament.

He started off the visit by being shown around campus by assistant coach Clay Moser and director of recruiting Michael Musselman before making his way back to the 66,000-square-foot basketball performance center.

“They showed me the practice facilities and the weight room,” Grady said. “I met the nutritionist. After that I had a little photo shoot and then they took me to see Bud Walton Arena.”

ESPN also rates him the No. 18 power forward in the nation and the No. 2 prospect in Nevada for the 2023 class.

"Loaded with physical ability, Grady is starting to put his game skill and functional athletic ability together," ESPN national recruiting director Paul Biancardi said. "Grady works the glass, is an excellent rim-runner and a vertical threat lob catcher as well as a positional shot blocker. His jump shot along with his defense is starting to take shape. A promising prospect."

The Arkansas visit stood out for several reasons including how close the facilities were to each other.

Getting to interact with Eric Musselman, and the staff helped make the trip perfect.

“The whole coaching staff was there really talking to me,” Grady said. “That was my first time to be able to meet all of them, so that was like real big for me. I like that a lot.”

He and his teammates participated in the HoopHall Classic held at Bentonville West on Thursday through Saturday. Coronado Coach Jeff Kaufman said Grady is a high energy, versatile player with a high ceiling.

“He’s a real high-motor kid,” Kaufman said. “I love him as a rim runner. He will defend 1-5. He’s learning to really settle and mature in the half-court game. He has a really good body for basketball. He’s only halfway through his junior year but he has plenty time to develop.

"He’s maturing and learning to do more things. His mid-range game is coming into play.”

While in Northwest Arkansas, Grady reached out to the staff to see if he could visit. The trip helped elevate the Razorbacks on his list.

“They’re definitely up there on my list right now,” Grady said. “They’re up there.”

He said an official visit to Fayetteville is a “maybe."

Grady added his communication with the staff includes Musselman and director of operations Anthony Ruta.

“Coach Musselman, I love him,” Grady said. “This was the first time meeting him in person. We talked over the phone a whole bunch, so I love the energy he brings and how straight-forward he is. Coach Ruta is always keeping me updated on Arkansas information.”

Kaufman praised the Bentonville community for their passion for basketball and the hospitality during the HoopHall Classic.

“It was a really nice environment and it really reminded [the team] what the love of basketball is about,” Kaufman said. “It was really good for us. We enjoyed it.”