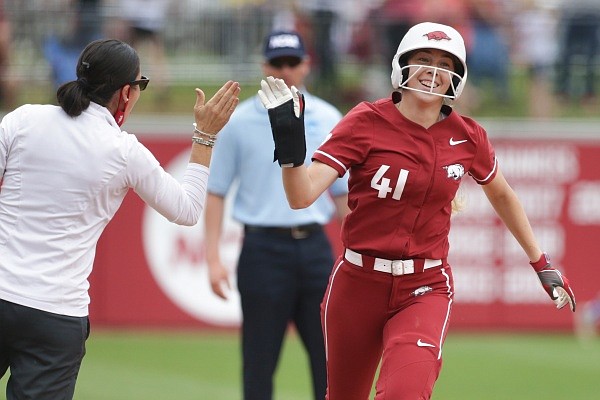 Arkansas infielder Danielle Gibson (41) runs home for a score on Saturday, May 22, 2021 during the NCAA Fayetteville Softball Regional at Bogle Park in Fayetteville. Check out nwaonline.com/210523Daily/ for the photo gallery.

FAYETTEVILLE — First baseman Danielle Gibson admitted that the University of Arkansas softball team began the first official day of fall practice with thoughts of finishing its season in Oklahoma City.

The Razorbacks completed an incredible season of firsts — claiming a share of the Southeastern Conference regular-season title and hosting a super regional a year ago. But the storybook season ended a step away from the Women’s College World Series, and that stuck with the holdovers, Gibson said.

“We still have that bitterness in our mouth,” Gibson said Monday. “We’re still kind of upset about it, but we’ve been able to turn the page and move forward. We’re just really excited to be back on the field.

“I think no matter what, the covid season has opened our eyes to not take anything for granted, so we’re just getting ready, preparing, practicing to make sure that we’re one step further this year.”

The Razorbacks will open the season in Mexico exactly a month to the day from the start of practice. They will face Rutgers in the season opener as part of the Puerto Vallarta College Challenge on Feb. 10. The home opener will be a week later against Wichita State.

Last season completed an incredible worst-to-first turnaround for the Arkansas softball program under coach Courtney Deifel. The Razorbacks finished 43-11 with the best winning percentage in school history to go with a 19-5 mark in the SEC. That’s a huge jump from a 17-39 record, including 1-23 in the SEC in 2016, in Deifel’s first season.

Five position players who started the final super regional game have moved on, but Gibson and pitcher Mary Haff will be cornerstones for this year’s group, which Deifel calls the most talented she has had in Fayetteville. Haff shared SEC Pitcher of the Year honors and was also a first-team All-America pick by the National Fastpitch Coaches Association.

Gibson was a second-team All-America selection.

Deifel was able to fortify the roster by adding four players through the transfer portal who she expects to all play significant roles this year. Graduate transfers K.B. Sides and Taylor Ellsworth should plug into the lineup in center field and behind the plate, respectively. Pitchers Callie Turner and Chenice Delce will also join Haff to be a part of an incredibly deep staff.

Deifel echoed what Gibson said about the players’ motivation after the way last season ended.

“From Day 1 in the fall, the returners were obviously motivated from last year and how things ended and just wanting more for themselves and the program,” Deifel said. “[Monday] was no different. I think more than anything they’re just chomping at the bit to play some real games and they’re ready to go.”

Deifel is excited about the team she calls "the strongest in every facet of the game that we’ve had.”

"We can still move some around to get the best pieces out there.”

With one month before the opener, she also said second base and right field are positions that are still to be determined.

“It’ll be interesting for those couple spots,” Deifel said. “They are making it really tough on us, and I like that.”