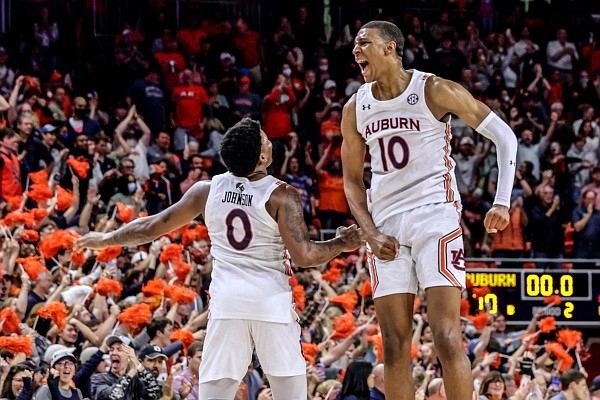 Auburn guard K.D. Johnson (0) and forward Jabari Smith (10) celebrate after defeating LSU during the second half of an NCAA college basketball game Wednesday, Dec. 29, 2021, in Auburn, Ala. (AP Photo/Butch Dill)

FAYETTEVILLE — Infighting in the SEC has left the league with only two unbeaten teams in conference play after three playing dates.

Among other top leagues, the Atlantic Coast Conference (with 5-0 Miami), the American (3-0 Houston) and the Big 12 (3-0 Baylor) had just one team with an unblemished mark in conference play entering Monday, while the Big Ten had two (4-0 Illinois and Michigan State) and the Big East had none.

The Razorbacks have the only 0-3 mark in conference play, and they are joined by Florida and Georgia (both 0-2) as the only winless teams in conference action.

Georgia was not seen as an SEC contender after suffering huge personnel losses — including intra-conference transfers like Auburn’s KD Johnson and Kentucky’s Sahvir Wheeler — but Arkansas and Florida entered league play with high hopes.

The Gators had their SEC opener against Ole Miss postponed and have since lost to Alabama and Auburn by an average of 12.5 points. Florida is 5-62 all time against top 10 opponents on the road after its 85-73 loss at No. 9 Auburn on Saturday. The Gators will look to rebound against a third consecutive ranked opponent as No. 11 LSU heads to the O’Connell Center for 6 p.m. game Wednesday.

“Our offense looked as good as it’s looked in a long time,” LSU Coach Will Wade said. “To [score] 79 on the second-best defensive team in the country, we’re capable of that.”

Coupled with a 65-60 win at the Maravich Assembly Center over No. 16 Kentucky last Tuesday, the Tigers notched their first back-to-back home wins over ranked opponents since 2000.

The Tigers, whose only loss is a 70-55 setback at current No. 4 Auburn on Dec. 29, shot up nine spots to No. 12 in Monday’s Associated Press poll. LSU travels to face Florida on Wednesday before hosting Arkansas at 1 p.m. on Saturday.

LSU might be without transfer guard Xavier Pinson, who left the win over Tennessee with what Wade called a sprained knee.

Washington had 17 points and a school-record 17 assists in Kentucky’s 92-75 win over Georgia and averaged 11 points, 10.5 assists and 5.5 rebounds in two games to win SEC freshman of the week honors for the third week in a row. He’s the first SEC player to capture league honors three weeks in a row since Kentucky’s Devin Booker did it was named the league’s top freshman four weeks in a row during 2014-15.

Ole Miss guard Matthew Murrell, tied for fifth on the team with 7.8 points per game heading into last weekend, scored a career-high 31 points to help the Rebels down Mississippi State 82-72 in the SEC’s oldest basketball rivalry.

Murrell made his first 10 field goals and finished 10 for 11 to boost his season shooting from 36.6% to 43%. Murrell had been shooting just 34% from the field in home games before ripping it up against the Bulldogs.

The 6-4 guard was one of three SEC players with 30-plus points Saturday, joining Arkansas’ JD Notae (31 at Texas A&M) and Missouri’s Kobe Brown (30 vs. Alabama). Prior to Saturday, only four SEC players had hit the 30-point mark: Texas A&M’s Quenton Jackson (31 vs. Central Arkansas), Notae (30 vs. Mercer), Vanderbilt’s Scottie Pippen Jr. (30 vs. Texas State) and LSU’s Darius Days (30 vs. Louisiana-Monroe).

Mississippi State holds a 146-119 advantage in the all-time series against Ole Miss.

Wall had 16 assists against Hartford in the 2009-10 season. Travis Ford had 15 assists in a game in 1993-94 and five players had 14 in a game, including Wheeler against North Florida this season.

Wheeler is the active SEC leader with 434 assists, just ahead of Florida’s Tyree Appleby (430) of Jacksonville.

Washington, who added 17 points against Georgia, entered the final minute with 15 assists, and his teammates knew the record was within reach.

“Once I got close to it, I think I got 15, all my teammates on the court were telling me you just need two more and you could break the record,’” Washington said. “I was like, ‘Oh shoot.’ That’s what I kind of went out there and did just to get the last two.”

Texas A&M has gone from the SEC’s worst three-point shooting team to its best in one season.

The Aggies were last in the conference and 312th nationally while hitting 29.9% of their three-point shots in 2020-21.

Kentucky forward Oscar Tshiebwe is averaging a double-double, and the junior transfer from West Virginia is on pace to lead the country in rebounding.

Tshiebwe had 29 points and 17 rebounds in Kentucky’s 92-75 rout of Georgia on Saturday to improve his rebound average to 15.2, nearly six rebounds per game more than the SEC’s No. 2 rebounder, Florida’s Colin Castleton (9.21). He also averages 16.1 points per game to rank sixth in the SEC.

A native of the Republic of the Congo and a former McDonald’s All-American, Tshiebwe wears No. 34 in honor of NBA Hall of Famer Hakeem Olajuwon.

The Big Ten had nine players on the list, followed by the Pac-12 (4), the Big 12 (3) and the ACC (2). The others were Oral Roberts guard Max Abmas, Villianova guard Collin Gillespie, the Gonzaga duo of Chet Holmgren and Drew Time, and Colorado State’s David Roddy.

LSU’s Tari Eason went off on Tennessee for a season-high 24 points and 12 rebounds on Saturday to notch his fourth double-double of the season.

Kentucky’s Oscar Tshiebwe easily leads the league and ranks second in the country with 11 double-doubles on the season. Florida’s Colin Castleton has six double-doubles, while Missouri’s Kobe Brown and Auburn’s Walker Kessler have five each.

The No. 4 Tigers put their 11-game winning streak on the line in the first of two hardcourt Iron Bowl meetings against arch-rival No. 24 Alabama.

“Clearly we’ll have to play our best game Tuesday night at Alabama, with their speed, quickness and athleticism. We’ll focus on this one coming up, and try not get too high, try not go get too low.”

“We have a ways to go as a team, but I think we’ve made tremendous strides, especially in the week or so we’ve had a chance to practice and get better.”

“We’ve got to give Missouri a lot of credit coming off a Covid pause and being down a couple of guys. They played a lot harder than we played. That may have been our worst performance of the year.”

3 | Consecutive wins for Missouri over Alabama, all at Mizzou Arena

10 | Consecutive shots made by Ole Miss’ Matthew Murrell, who was 10 for 11 with 31 points against Mississippi State

12 | Consecutive wins by double figures for Kentucky, all of the Wildcats’ wins on the season