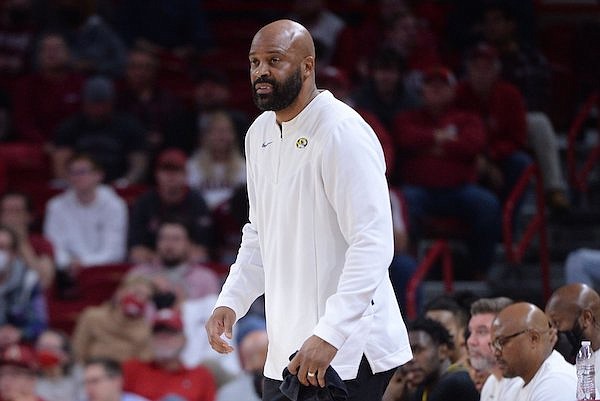 Missouri coach Cuonzo Martin directs his players Wednesday, Jan. 12, 2022, during the first half of play against Arkansas in Bud Walton Arena in Fayetteville.

Instead, the Razorbacks jumped to a 26-3 lead, led 49-15 at intermission and breezed to an 87-43 win over the Tigers at Bud Walton Arena.

“Tough night,” Martin said following the worst defeat of his seven-year tenure at Missouri. “I think it is safe to say that I didn’t see it coming, but give those guys credit for playing well from start to finish.

“They had a different, unique lineup probably for them. It was really more threes and fours on the floor outside of (JD) Notae as a point guard and it worked out well for them. I think they were able to set a physical tone and we couldn’t recover from that."

Missouri senior Javon Pickett, who scored a team-high 13 points, said the Tigers fell apart early and his team was not as physical as an Arkansas team that had lost three straight games and five of six.

“We’ve got to come out aggressive and stick with our game plan,” Pickett said. “We’ve got to stay together. They out-toughed us the whole night. That’s really what happened.”

But Martin felt like it was Notae’s early defense on Missouri point guard Jarron “Boogie” Coleman that set the tone.

“I think the biggest thing and you could see it in the first seven minutes was Notae did a good job of pressuring Boogie Coleman up the floor,” Martin said. “He had him walking the ball up the floor, so now they could extend their defense. Again, I am not sure why he was walking up, but you have to give credit to Notae for the pressure.

“I think that was the biggest key — dictating the tempo, controlling the tempo, putting pressure on Boogie. Then it extended from Boogie to Kaleb (Brown) and then Anton (Brookshire), where it had us so far out of it that we couldn’t really flow into our offense. “

Coleman finished with 11 points and 3 assists against Arkansas after having 18 and 6 against Alabama.

“I think it is simple: Boogie as the point guard in that situation, and not to say he was the reason why the score was what it was, but in that situation you have to beat them off of you and get up the floor and make a play.

“You can’t allow a guy to get you from side to side...and you pick the ball up at the half-court line, because you cannot win with offense that way.”

After not getting into its offense early, Missouri settled for shots, Martin said.

“I thought sometimes we tried to drive when there was a shot that presented itself," Martin said. "I thought we had two or three guys around when one guy was posting up and not having the good spacing that we needed.”

Kobe Brown had 30 points and 13 rebounds in the win over Alabama, but was limited to 6 points and 6 rebounds at Arkansas.

“One thing that I said to him was, 'Allow it to come to you,'” Martin said. “When he was trying to be aggressive and scoring, there were guys hovering all around him. That means guys need to make shots around him on the perimeter, and you have got to make plays on the perimeter.”