Catcher no longer with Razorbacks 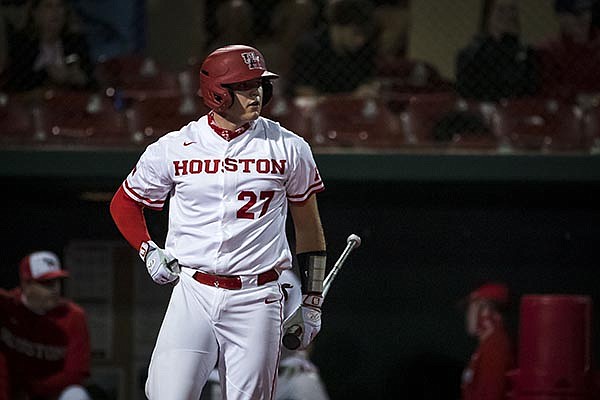 Houston catcher Leyton Pinckney (27) is shown during a game against Texas A&M on Tuesday, March 16, 2021, in Houston. (Photo by Joe Buvid, For Houston Athletics)

FAYETTEVILLE — Catcher Leyton Pinckney, who transferred to the Arkansas baseball team prior to fall practice, is no longer with the program.

Pinckney said he left the team to work on the campaign staff for his cousin, David Perdue, a Republican candidate for governor in Georgia. Perdue was a U.S. senator from 2015-21.

Pinckney is from Kathleen, Ga.

“I have nothing but love for the Hogs and the Arkansas baseball program," Pinckney said in a statement. "(Dave Van Horn) is the best in the business. It truly doesn’t get better.

"I decided to move on and pursue an opportunity outside of baseball....I am finishing my degree, and I will graduate from Arkansas in December. I will always be a hog! There will be no one cheering louder for the Razorbacks this year than me.”

Pinckney went through fall practice with the Razorbacks along with three other catchers — Michael Turner, Dylan Leach and Max Soliz — who remain on the Arkansas roster that was updated on the team's website this week. Turner is a graduate transfer from Kent State, Leach was a backup as a freshman last season and Soliz is a true freshman.

The catchers are vying to replace three-year starter Casey Opitz, who was selected by the Chicago Cubs in the eighth round of last year’s MLB Draft. Turner, an all-conference catcher at Kent State in 2020, appeared to be Arkansas’ frontrunner at the position during fall practice.

Eight players have left the Razorbacks’ program since the end of fall practice. Transfers are common at the end of the fall evaluation period as rosters are trimmed to fit NCAA requirements.