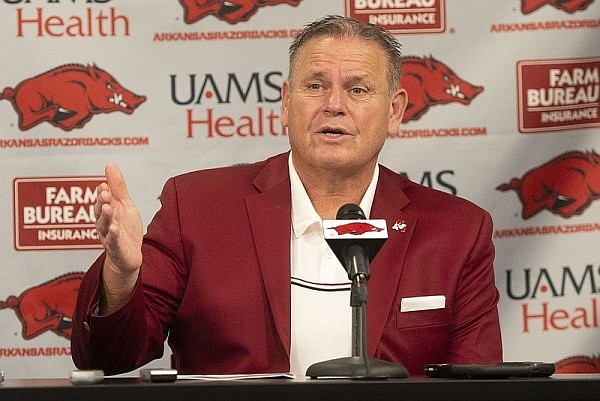 Recruiting momentum is one of the best ways for Arkansas coaches to celebrate a nine-win season that concluded with an Outback Bowl win over Penn State and a top 25 national finish.

After a short dead period, that’s precisely what Arkansas head coach Sam Pittman and his assistants are doing while simultaneously checking out the transfer portal and bringing in some of its top in-state and out of state 2023 and 2024 prospects.

College football is a talent acquisition business and you must literally and figuratively strike while the iron is hot.

That’s true now that the Arkansas program has gone from arguably the SEC’s least competitive team under former head coach Chad Morris to one under Pittman that has expectations to compete in the league at a high level each season.

“I think it will make our kids a little bit hungrier understanding we can be a top-25 team, somewhere in there,” Pittman said of the 2021 season. “Certainly we want to get higher than that and start into the top 15, top 10 in the country.

“…We play in a heck of a league. I said it a long time ago, we’re in the SEC West, right where Arkansas belongs, and we’re starting to prove that.”

The first order of business is to see what players that are currently in the portal. Could they plug in for Razorbacks that have departed?

“…We have a few (staff) that’s looking at the portal,” Pittman said in a November press conference. “And then if we feel like they’re, you know, our caliber, SEC type caliber, then, you know, we get an evaluation from our recruiting department, and then it’s moved on through the process.

“The portal, usually, if they’re very, very good, it goes pretty fast, so you kind of have to be rolling on that as fast as you possibly can.”

Three of the players in the portal that Arkansas is known to be involved with are Alabama linebacker Drew Sanders (6-5, 244), Tulsa defensive tackle Jaxon Player (6-0, 280) and former Missouri defensive tackle Mekhi Wingo (6-1, 275).

Sanders, one of seven Crimson Tide players to enter the portal on Tuesday, arrived in Fayetteville on Wednesday to take a visit.

He played in 23 games the past two seasons for Alabama.

Player, who was with current Razorback defensive line coach Jermial Ashley, has a final list of Arkansas, Oklahoma, Oklahoma State, TCU and Baylor.

He is visiting Arkansas this weekend.

The Razorbacks will be hosting recruits unofficially the next three weekends with some 40 slated to be on campus.

Pittman is looking for recruits that want to come to Arkansas, not just play for the coaches currently at the school.

“He has to like the coach, but he needs to commit to the school,” Pittman said. “In our case, we try to sell the state and sell that we’re different. We have no pro teams here. We have Arkansas State, but we’re the Power 5 school, the SEC team, in the state. We’re trying to sell all that kind of stuff, but the bottom line is, we’re saying come play for the state of Arkansas — it’s just different.”

Georgia head coach Kirby Smart, whose team won the national championship with a 33-18 win over Alabama Monday night, is a big fan of his former assistant Pittman.

“He cares,” Smart said on SEC coaches media teleconference during last season. “… People recognize when a person is real and themselves and not a salesman. He cares and it matters to him.”

“Coach Pittman is doing it the right way,” Franklin said. “There’s a lot of excitement at the University of Arkansas right now with what he’s been able to do. I think he’s a great fit for the university.”