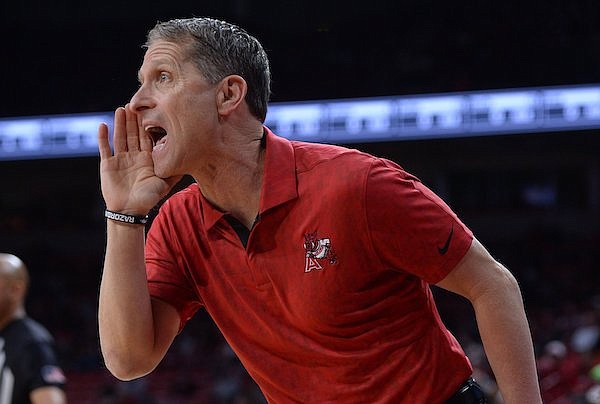 Arkansas coach Eric Musselman yells to his players during a game against Missouri on Wednesday, Jan. 12, 2022, in Fayetteville.

FAYETTEVILLE — University of Arkansas Coach Eric Musselman had successful shoulder surgery Thursday, the UA announced, and he is expected to miss at least the Razorbacks’ next two games at LSU on Saturday and against South Carolina next week in Walton Arena.

Smart coached in the pro ranks for 22 seasons,  including as head coach of the NBA's Cleveland Cavaliers, Golden State Warriors and Sacramento Kings. He was hired at Arkansas prior to this season for his first job as a college coach.

Musselman had surgery to repair a full tear of the supraspinatus tendon and partial tears to the infraspinatus and subscapularis tendons in his left shoulder, according to the news release.

Musselman injured his shoulder on Dec. 2 during a practice drill. An MRI on Dec. 22 revealed the extent of the injury, which was described as a torn rotator cuff.

Musselman had hoped to delay surgery until after the season, but he said earlier this week the pain had become worse and that he continued to have trouble sleeping, especially on the road.

“Almost six weeks ago, Coach Musselman sustained a significant shoulder injury in practice after a collision with a player,” Dr. Wesley K. Cox said in a statement. “An MRI confirmed his shoulder had torn tendons and would require surgery. The goal was to use daily physical therapy and treatment as well as a steroid injection to delay the surgery as many weeks as we could, none of which have offered any significant improvement.

“At this time, surgery to repair the tears was necessary due to the amount of pain and instability he was experiencing and to mitigate the risk for significant complications in the future.

“Coach Musselman is expected to do very well and ultimately make a full recovery.”

Musselman, who is in his third season at Arkansas, previously missed one game as the Razorbacks' coach, against Abilene Christian last season when he was in covid-19 safety protocols. He did not test positive, but had been in contact with a staff member who did.