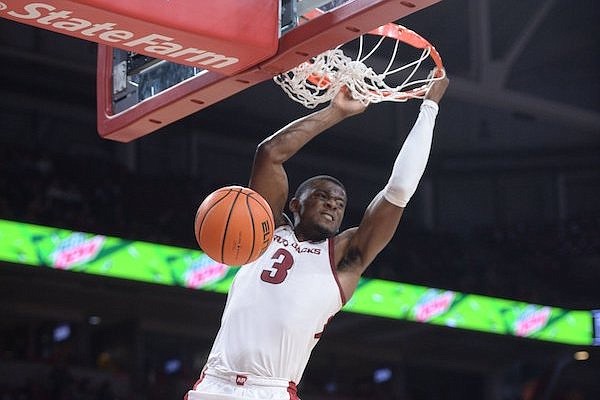 Arkansas forward Trey Wade dunks the ball Wednesday, Jan. 12, 2022, during the second half of the Razorbacks' 87-43 win over Missouri in Bud Walton Arena in Fayetteville.

FAYETTEVILLE — Trey Wade took advantage of his third start of the season to score a season-high 17 points in the University of Arkansas’ 87-43 blowout of Missouri on Wednesday night at Walton Arena.

Wade, who had been averaging 8.7 minutes per game, had a put-back dunk and a three-pointer to help trigger the Razorbacks’ 19-0 streak to break away for a 26-3 lead.

“What we’re doing right now we’ve just got to stick to it,” Wade said on the SEC Network. “We’ve got to be the tougher team, the smarter team, every night. You know, we’re a good team. We’ve got to believe in ourselves and got to have a swagger about ourselves.”

On the put-back jam, the graduate transfer from Wichita State was outside the three-point circle as JD Notae launched a three-point try from the opposite wing. Wade swooped down the lane unchecked, grabbed the miss in the air and slammed it home for an 11-3 Arkansas lead to start his big scoring night.

Wade’s previous high this season was seven points on 3-of-5 shooting in his first start in an 81-55 win over Elon on Dec. 21. He also started the next game at Mississippi State in the Hogs’ SEC opener but had not started since.

Wade came out briefly after seizing up with cramps in the first half.

Wade’s career high is 23 points while playing for Wichita State at Tulane on March 3.

Arkansas guard JD Notae, the SEC’s second-leading scorer, had a very typical night with 19 points on 6-of-14 shooting, including 2 of 7 from three-point range.

Notae entered the night averaging 18.8 points per game, a fraction behind Vanderbilt’s Scotty Pippen Jr. (19.2). He led the Razorbacks with a plus-36 in the plus-minus ratings on Wednesday, meaning Arkansas out-scored Missouri by 36 points while he was on the floor.

Guards JD Notae and Au’Diese Toney and forwards Trey Wade and Jaylin Williams were also in the starting group, which had not played a minute together all season.

“They had a different unique lineup, probably for them, with really more 3s and 4s on the floor outside of Notae as a point guard and it worked out well for them,” Martin said. “I think they were able to set a physical tone and we couldn’t recover from that. But [I] didn’t see it coming.”

Notae and Williams made their 14th starts, Toney his 13th, and Wade his 2nd.

Forward Kamani Johnson appeared to suffer an ankle injury late in the first half after contributing four points and four rebounds in his first start.

Coach Eric Musselman provided a brief update on Johnson, who did not return in the second half, saying it doesn’t appear the injury will keep him out long, but “he’s day to day” when it comes to upcoming games like Saturday at LSU and next week against South Carolina and Texas A&M.

Missouri was coming off perhaps its best win of the season before being doubled up by the Razorbacks, 87-43.

The Tigers downed Alabama 92-86 at Mizzou Arena on Saturday for its second-highest scoring game of the season. Missouri scored 49 fewer points against the Razorbacks.

Forward Jaylin Williams had 13 points and a game-high 10 rebounds for the Razorbacks, including 7-of-8 shooting from the free-throw line.

The 6-10 sophomore from Fort Smith posted a double-double for the second consecutive game, following a 10-point, 11-rebound effort at Texas A&M last Saturday.

One of Missouri’s biggest issues was taking care of the basketball. The Tigers had 11 turnovers in the first half and 12 in the second half.

The Razorbacks enjoyed a 26-4 edge in points off turnovers.

Arkansas averaged 16.3 turnovers while starting 0-3 in SEC play, but dropped that number to 8 against the Tigers.

When Kobe Brown notched Missouri’s second made field goal on a put-back basket with 8:49 left in the first half he ended a stretch of 9:16 without a field goal for the Tigers.

Arkansas outscored Missouri 23-4 between the baskets, during which the Tigers missed 10 consecutive shots while the Hogs were going 10 for 16.

JD Notae buried a three-pointer at the 18:24 mark that was notable for a couple of reasons and which forced Missouri Coach Cuonzo Martin to call a quick timeout.

Notae’s three-pointer, which gave the Razorbacks a 7-0 lead, came after a scramble for a loose ball won by Arkansas’ Jaylin Williams near the Missouri bench which caused the Tigers to bunch down toward the paint.

Williams spotted Notae alone at the top of the circle and the guard made the shot with no defender within 10 feet to give Arkansas its 1,091st game with a made three-pointer, the third-longest streak in the nation.

Lykes showed his knee was fine late in the first half when the 5-7 guard rose to block a shot from point blank range by 6-3 guard DaJuan Gordon. Lykes is the shortest Razorback ever to be credited with a blocked shot per Hogstats.com.

Lykes finished with 8 points on 4-of-7 shooting, 2 assists and a plus-18 in the plus-minus category in his 21 minutes.

JD Notae was at the line with three free throws with 10.8 seconds left in the half with Arkansas leading 47-15 after a foul by Amari Davis.

Notae made his first two foul shots, but left the third short to put Arkansas on top 49-15. Stanley Umude blocked Kobe Brown’s shot on the right block in the final second of the half.

The Razorbacks’ 34-point halftime lead tied its largest in an SEC game with a 57-23 advantage on Mississippi State on Feb. 20, 1993, according to HogStats.com.

The Razorbacks won in blowout fashion for the second time on the date of Jan. 12 in the last six years against Missouri.

Missouri entered the game as the SEC’s worst three-point shooting team at 25.3%, well behind Arkansas in 13th at 30.2%, and the Tigers’ long-range shooting didn’t get any better.

Forward Trevon Brazile made Missouri’s first three-point try at the 18:05 mark to cut Arkansas’ deficit to 7-3, but the Tigers missed their next 10 in a row to shoot 9.1% (1 for 11) from that range in the half.