Musselman tough, but made the right call 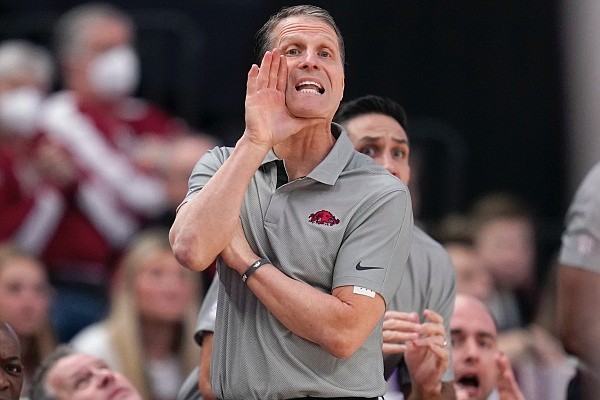 Arkansas head coach Eric Musselman yells to his team to setup a play against Texas A&M during the first half of an NCAA college basketball game Saturday, Jan. 8, 2022, in College Station, Texas. (AP Photo/Sam Craft)

He tried to coach with pain, but it finally got to be too much and the Arkansas Razorbacks’ men’s basketball coach finally said enough.

After more than a month of living with the pain and discomfort — which kept him up at night — Musselman had surgery Thursday morning to repair a full tear to the supraspinatus and partial tears to the infraspinatus and subscapularis tendons in his left shoulder.

Those tendons help with movement of the arm, so every time he moved his left arm, he was greeted with a hard shock of pain.

Musselman will miss at least the next two games at LSU on Saturday and South Carolina at home on Tuesday.

He does go on medical leave on a high note.

The Razorbacks played perhaps their best defense this season against Missouri on Wednesday night and beat the Tigers so bad they probably felt like they needed surgery.

Missouri attempted 25 mostly contested shots in the opening half and made three, or 12%.

Meanwhile, Arkansas had 17 field goals, including two three-pointers, nine with assists and a total of 16 points off turnovers to lead 49-15 at the half.

They could have turned off the lights in Bud Walton Arena. It was over.

Missouri played better in the second half trying to get higher percentage shots but still couldn’t handle Arkansas’ defensive pressure and had 12 turnovers in the final half for a total of 23.

It was a bench-clearing game for the Razorbacks as everyone on the roster played at least one minute, and if any of the trainers could have dressed out quick enough they might have played, too.

JD Notae led the first-half charge with 14 points on 4 of 9 shooting. He finished with a team-high 19, Trey Wade scored 17, Davonte Davis came off the bench to add 15 points along with a team-high four assists, and Jaylin Williams had 13 points and 10 rebounds.

The Razorbacks needed this game after losing five of the previous six games. After losing to Texas A&M last week, their NET ranking was 98. It jumped to 83 after the win.

While Musselman is out, the Razorbacks will be coached by Keith Smart, who joined the staff last summer.

Smart has 22 years of professional coaching experience, but the lack of college coaching shouldn’t be an issue. This isn’t about recruiting, it is about coaching and the Razorbacks run a lot of NBA-style isolation offense.

Smart was Bobby Knight’s first-ever junior college recruit at Indiana and in 1987 he hit an 18-foot baseline jumper to give the Hoosiers a 74-73 win over Syracuse in the national championship game.

It was Knight’s final of three national championships.

Musselman, who most likely will try to rush back to the coaching box, suffered his injury in practice on Dec. 2, when he walked on the court for a teaching moment only to have 6-6, 220-pound Wade fall on him.

He coached nine games with the injury and was 4-5.

It was not the first time he has coached with pain.

In 2011 while coaching the Venezuela national team, he tore his Achilles heel and ended up coaching on crutches.

After the recent injury, he said the first one was more problematic, because not only was he on crutches but in a foreign country and half the team spoke a different language.

He said he had hoped to wait until the end of the season to have the surgery.

It is obvious the pain had become unbearable for Musselman, who is mentally and physically tough.