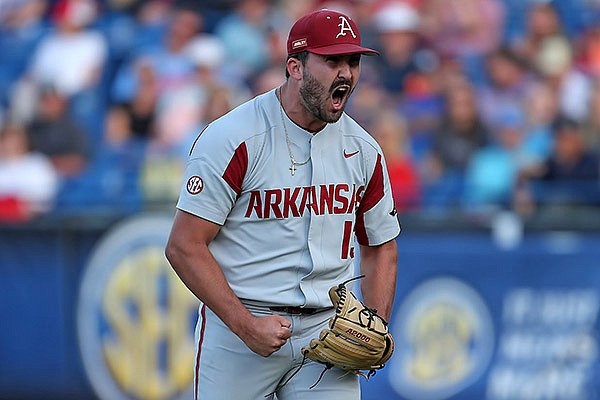 FILE — Arkansas pitcher Connor Noland celebrates an out during an SEC Tournament game against Ole Miss on Saturday, May 29, 2021, in Hoover, Ala. (SEC pool photo)

A lot can happen between now and September, but there are questions about the quarterback position when you look at the Arkansas football roster.

KJ Jefferson will be among the nation’s top returning quarterbacks, but he is one of only three scholarship quarterbacks and reserve Kade Renfro tore knee ligaments during bowl practices.

Hence, a light bulb almost blinded me during an interview with fourth-year baseball pitcher Connor Noland. Could he be interested in one more fling at football? He did start one game as a quarterback as a true freshman in 2018.

“If they need me for one game late in the season, I’d do it,” Noland said. “I will say that I’m getting old and my body is not what it once was.

“I watched the championship game with Alabama and Georgia, and noticed the hitting. I would not survive much of that.”

That’s not raising his hand all the way as a volunteer quarterback, but Noland might get his arm twisted by his roommate, linebacker Bumper Pool.

“I still live with Bumper,” Noland said. “I watch practice film with him. I will say that I’m still interested (in football).”

Be clear about that last line: he’s interested in watching, not playing football. His focus is on what most think is going to be a big season as a starting pitcher for the baseball team.

After fighting through a forearm injury last spring that limited his action to 18 innings, Noland admits that health is a primary concern as he prepares for his last try at college pitching. He’ll be 23 on July 20. He needs to make this season count if he is to move on to professional baseball, his lifetime goal.

“I’m recovered,” he said. “I’m healthy. I feel great. I spent all summer working to get over (the forearm injury). I’ve put in the right work.”

It’s a big jump even from late in the season when Noland became a valuable addition to the bullpen. He was 1-0 with one save against Ole Miss in the third game of the SEC Tournament when he didn’t allow a hit over three innings with four strikeouts.

“I was feeling better then, but was still recovering from the injury,” he said. “I wasn’t going to bow out on my team. So I was just trying to give them a little. That game in the SEC is one of the few times everything was clicking. I didn’t have much rhythm at any other time.”

It’s a different Noland now — the old Noland. All in the program have seen it and applaud Noland’s work ethic over the last six months. Head coach Dave Van Horn raves about what he sees from the Greenwood native.

“Connor is the best he’s been since he got here,” Van Horn said. “He reminds me of what we saw when he came down from football as a freshman.”

Noland’s first bullpens thrown that winter were unreal. He could locate all of his pitches and that’s rare for a true freshman. It’s the reason he made 19 starts on the way to Freshman All-America honors by Perfect Game and gave up football.

“He’s like that now, but with better stuff, better velocity,” Van Horn said. “He’s back.

“He can keep the ball down. He’s not walking batters. He’s got great control.”

Pitching coach Matt Hobbs sees the same kind of jump from Noland that Kevin Kopps made after great summer workouts in 2020. No one is predicting a Kopps-like season for Noland, but it’s a fun thought.

“Connor had the best fall among our front-line pitchers,” Hobbs said. “It was 180 degrees from the previous fall.

“We have a great offense, but he was able to attack them in the fall. He got himself fit and was much better.”

Noland said he agrees with Van Horn that his control is consistent, much like his freshman season.

“I’m able to attack both sides of the plate and make it hard on hitters,” he said. “I am able to do that with off-speed pitches, too.”

He’s got “multiple out” pitches, but it’s a great fastball that is the difference maker now.

“What I’ve got now is a sinker that’s really effective,” Noland said. “So it’s the fastball that is my best pitch.”

It’s a fun time for Noland.

“I’m super comfortable right now and confident,” he said. “I put in the work. Some of it was diet and a lot was what I did with (strength coach) Blaine Kinsley. Some of it was cardio.

“I knew this was my chance to take it to the next level. It could be my last year and I wanted to put everything on the table and have no excuses.”

Included in his summer workouts were drills from Kopps designed to strengthen his injured forearm.

“I had my own regimen, but he showed me some workouts,” Noland said. “But I also had a plan from Blaine. He’s one of the best for baseball in the country. I’ve dabbled in a lot of strength programs with my football background.

“What Blaine can do is create a program that fits every athlete. Everyone is a little different as far as needs. It is very easy to follow his guidance.”

There is also motivation from Kopps, the winner of every major player of the year award in college baseball last year.

“He did the impossible,” Noland said. “What he did is show us all that it can be anybody’s time. When you get your chance, take advantage of it. He did, so be ready.

“What was he — in his sixth year or his 28th year — just always be ready. Prepare so when it comes you can step forward.”

Hobbs has a massive poster behind his desk in his new office inside the Hunt Baseball Development Center.

“My wife decorated my new office with lots of family pictures, but there is the poster of Kevin from the Golden Spikes Award that is the dominant thing,” Hobbs said. “It’s right behind my chair.

“It’s not going to leave that spot. I want him to be remembered here. I want every pitcher to see that poster and every recruit to see it.”

Hobbs said the reminder to players when he talks about Kopps isn’t about his numbers last year.

“No, the numbers are not the standard we mention that he established,” Hobbs said, “It’s the standard of his work ethic, the person he was. All Arkansas pitchers who come after him should be held to those standards, the work and the ownership.

“As a coach, I don’t want to get lost in his numbers. I want to peel it back beyond the statistics and make sure we talk about the person, the human being that Kevin always was first.

“No one has ever been more valuable to their team. It’s not the numbers that made him most valuable. It was the way he worked.”

That’s what Hobbs is hearing about Kopps from the San Diego Padres, who drafted him in the third round last season.

“The industry was split on Kevin last year on where to draft him,” Hobbs said. “I get that. He was 24 and he had had Tommy John surgery. I understand that’s how it works.

“But he’s unique and should have been considered as such. He’s valuable for the way he works, what his teammates see. The Padres see that now. He outperforms everyone because of the way he works. Don’t put him in the same bucket as everyone else.”

This is a new year and Hobbs knows “there won’t be another Kopps walking through the door.” It was Hobbs who predicted this time last year that Kopps might have a special season.

“I did think that,” he said. “I was going off what I saw in the fall. But I know that spring is not like fall.

That’s partly why coaches are excited about Noland. He does have control and can work the edges, but it’s that moving fastball that becomes vicious.

“It’s pretty cool to watch him,” Hobbs said. “He’s getting guys out in the middle of the plate.

“The best guys don’t have to live on the black. They can live inside the strike zone in the white.”

Right now, Noland is one of the best.