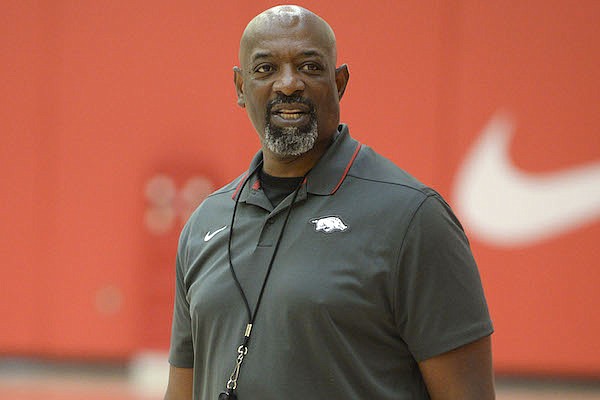 FAYETTEVILLE — Thirty-five years after Keith Smart beat LSU as a player, he’ll try to do the same as a coach today when he leads the University of Arkansas men’s basketball team into the Maravich Assembly Center in Baton Rouge to take on the No. 12 Tigers.

Smart, in his first season as an assistant for the Razorbacks, will serve as their interim head coach with Eric Musselman missing the game as he recovers from shoulder surgery.

It’s a homecoming game for Smart, 57, a Baton Rouge native who played at McKinley High School.

Smart still has family members in Baton Rouge, including his mother, who will attend today’s game.

When Smart coached in the NBA for 19 seasons as a head coach with the Cleveland Cavaliers, Golden State Warriors and Sacramento Kings and as an assistant with the Warriors, Kings, Miami Heat, Memphis Grizzlies and New York Knicks, he said family members would come to New Orleans to visit when the team he was with played in town.

“They always would make that trip up to New Orleans and come watch a game every time we played there,” Smart said. “Now that it’s right there in Baton Rouge at LSU, it just makes it a little bit more sweeter.”

As a player at Indiana, Smart scored 10 points — including hitting two free throws with 40 seconds left — to help the Hoosiers beat LSU 77-76 in the 1987 NCAA Tournament Midwest Regional final at Cincinnati.

Indiana Coach Bobby Knight is remembered for slamming a phone on the scorer’s table in anger when he drew a technical foul arguing with an official who called a three-second violation against the Hoosiers.

“I think he was ordering pizza, and they put the wrong ingredients on it,” Smart said with a smile when asked about Knight and the phone incident. “I think that’s why he did that.”

“It was good to beat them, because I had played against so many of those guys, and plus being able to go to the Final Four,” Smart said. “LSU was a team that we had to beat to get that opportunity.”

Smart got to return to his home state with the Final Four played at the Superdome in New Orleans.

Indiana beat UNLV 97-93 in the semifinals, then Smart’s 18-foot jump shot with four seconds left in the championship game lifted the Hoosiers to a 74-73 victory over Syracuse.

Beating LSU and winning the national championship gave Smart bragging rights when he returned home, and he’ll be hoping to make another good memory today.

“I know Coach Smart wants to go in there and win,” Arkansas sophomore forward Jaylin Williams said. “It would be big for all of us.”

“Everything they do is well thought out, well documented, well researched. I don’t think hardly anything will change with that. All their coaches are really good and will step in.

“I don’t mean they won’t miss Muss. He’s the guy who runs the whole thing. But I think he’s got the program so trained up and on his wavelength that they’ll be fine.”

Williams said the players are confident in Smart and the entire coaching staff, including assistants Clay Moser and Gus Argenal.

“Our coaches are going to keep on going,” Williams said. “We want to keep it rolling.”

“Muss gives us a lot of freedom on the floor,” Smart said. “We have stations during the course of practice, and each coach gets a chance to coach these young men throughout the day.

“So I think we’ll continue to do the same things that we always have done without any big changes other than obviously I’m coaching and Coach Muss is not here.

“But overall, everything kind of stays the same. We coach these young men. We make sure they’re doing things the right way on the floor and off the floor.”

Smart is on a college staff for the first time this season, but Williams said he’s gained the respect of the players and relates well to them.

“Just Coach Smart’s brains, his knowledge of the game and being able to read things,” Williams said. “I’ll watch film with him and we’ll be thinking the same thing. Or he’ll say something that I was thinking.

“We all have confidence that he’s going to lead us in the direction we want to go.”

Smart said he wasn’t a high level enough high school player to be recruited by LSU, and that when he became a standout at Garden City (Kan.) Community College, LSU wasn’t among his top choices.

The only time Smart had been in the Maravich Assembly Center prior to this weekend, he said, was for an NBA exhibition game between the Washington Bullets — as the team was known before changing its name to the Wizards — and Atlanta Hawks.

“Myself and three other friends had a chance to get into that building and watch that game,” Smart said. “I think I was probably around 11, 12.

“To go back there now, it’ll be special.”