Notae stays on a tear in Hogs' upset of LSU 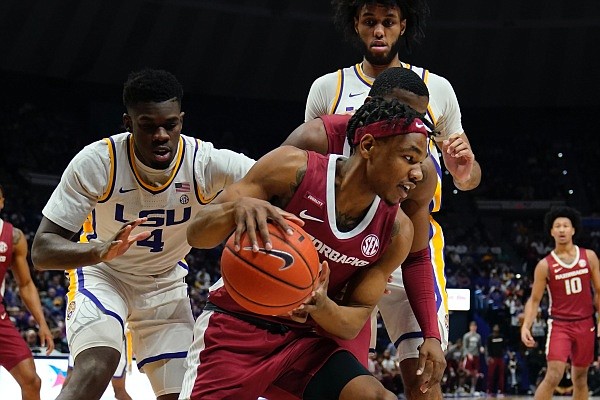 JD Notae was just curious where the steady flow of LSU fans leaving their seats was headed.

With 11.3 seconds remaining and Au’Diese Toney preparing to shoot a free throw, Notae, standing right of the lane, turned his back to Toney. Moments later, he stared into the Maravich Assembly Center crowd beyond the baseline as he shrugged.

It was the final dagger of the day from Notae, who turned in a sound, efficient performance against the No. 12 Tigers and led Arkansas to a 65-58 victory, its second straight following a 0-3 start to SEC play.

The second-leading scorer in the SEC at 18.8 points per game entering Saturday, Notae scored a game-high 19 against LSU, which held the No. 1 defensive efficiency rating in the country, according to KenPom data. He knocked down 7 of 13 shots and a pair of key second-half threes after Arkansas missed all of its attempts beyond the arc before halftime.

Notae also led the Razorbacks with four assists. In his 26 minutes, 41 seconds on the floor, Arkansas outscored the Tigers by 18 points (50-32).

Notae put his value on full display, both on the offensive end as a playmaker and as a calming presence in a close game. He was clearly missed when forced to sit after being whistled for a second foul with 7:17 left in the first half.

The veteran guard was later hit with his fourth foul with 10:10 to play and the Razorbacks trailing 50-48.

Just more than one minute later, he was subbed back in with LSU ahead 56-48.

Notae then helped Arkansas flip the game. Over a span of 5:43 late in the second half, he scored or assisted on 11 points in a 13-2 run for the Razorbacks, including a three that gave Arkansas a 58-56 lead.

Also during that stretch was a steal that eventually ended in a put-back layup for Toney.

“JD can play in all three areas on the floor,” Arkansas interim coach Keith Smart said. “From an offensive standpoint, JD has the ability to shoot the three-ball, to get to the mid (range) area, and also get to and finish at the rim with both the right hand and left hand.

“That's pretty good for a player.”

Smart added that Notae was able to take regular advantage of LSU’s switch-everything style of defense.

“Invite the switch, back it out and go when you're ready to go to for yourself or for a teammate,” Smart said. “That's what he's done.”

Williams, who recorded his third consecutive double-double and knocked down the go-ahead three-pointer assisted by Notae with 1:12 remaining, commended Notae for how he competed hard during a critical juncture of the game and did not foul out.

“I’m pretty sure he hit a big three,” Williams said, “and there was a commercial or a timeout and I said, ‘Now JD, every time that you get a bucket or we go on a little run, you always reach and get a good little steal. We don’t need that this game. We need you to stay in the game, don’t pick up that fifth foul. Just play solid defense.’ He did.

“He did a great job managing his fouls throughout that last 10-or-whatever minutes.”