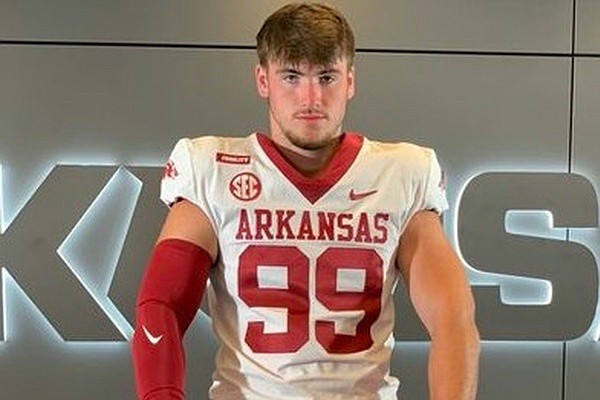 Despite the inclement weather, about 60 prospects made their way to Arkansas for Prospect Day.

• One of the notables confirmed to have visited is junior tight end Luke Hasz, who was previously committed to Oklahoma.

• Defensive lineman Edric Hill, 6-3, 271, of North Kansas City High School, made the trip to Fayetteville. He has numerous offers, including one from Arkansas.

• Star City athlete CJ Turner, 6-1, 210, is being looked at as a linebacker by the Razorbacks. He ran a hand-held 4.48 seconds in the 40-yard dash at an Arkansas camp last summer. He recorded a broad jump of 9 feet, 10 inches. He also recorded a 33-inch vertical.

Turner suffered an ACL injury early in the 2021 season. The Razorbacks want to see him perform at camp this summer. A good showing could see an offer come his way.

• Bryant defensive lineman TJ Lindsey, 6-4, 250, is one of the more promising sophomores in the state. He spent some time with Sam Pittman and defensive line coach Jermial Ashley.

Arkansas coaches plan to attend one of his basketball games this month.

• Malvern sophomore offensive lineman Vinny Winters said Arkansas is hoping he jumps on board with a commitment in the future.

He has offers from the Razorbacks, Memphis and Arkansas State.

• Bentonville West sophomore offensive lineman Lane Jeffcoat was definitely one of the largest visitors. He measures 6-9 and weighed in at 287 pounds.

The Razorbacks want to see him at camp this summer.

• Sophomore receiver target Parker Livingstone, 6-4, 185, of Lucas (Texas) Lovejoy, has visited Arkansas several times since the summer and made another trip to Fayetteville on Saturday.

He has offers from the Razorbacks, Tennessee and Pittsburgh. His brother, who does not play football, is transferring to Arkansas from McNeese State for the spring semester.

• Defensive lineman Kaleb James, 6-5, 250, of Mansfield, Texas, said the highlight of the visit was spending time with Pittman. He said Pittman is blue collar and he thinks of himself as blue collar.

He plans to visit again next weekend and plans to announce his college decision Tuesday.

• Junior offensive tackle Connor Stroh, 6-7, 355, of Frisco (Texas) Wakeland, visited the Razorbacks in 2021 and made a return trip Saturday.

He has offers from Texas, Florida State, Baylor and other programs. An offer from Arkansas looks like a strong possibility in the future.

• Sophomore receiver Ryan Wingo, 6-2, 198, of St. Louis University High School, traveled about halfway to Fayetteville before turning back because of bad road conditions.

He plans to reschedule.