Back on track: Shorthanded Hogs give No. 12 LSU first home loss 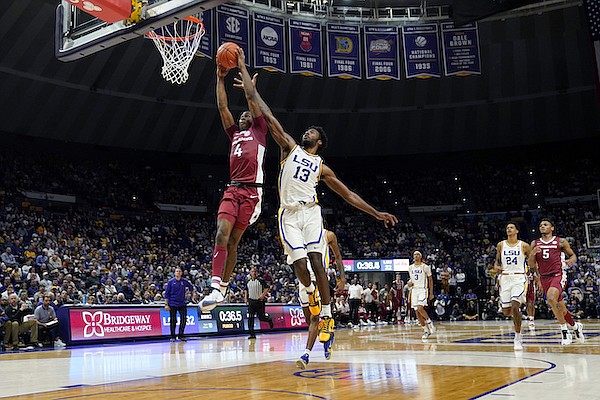 An eight-minute drive from the Baton Rouge house where Keith Smart grew up, he enjoyed the happiest of homecomings.

With Smart serving as the University of Arkansas’ interim head coach, the Razorbacks rallied from an eight-point deficit in the second half and beat No. 12 LSU 65-58 on Saturday at the Maravich Assembly Center before an announced crowd of 12,734.

Smart filled in admirably for Razorbacks Coach Eric Musselman, who stayed in Fayetteville while recovering from shoulder surgery.

“He never got rattled, and we never looked rattled. When we see him not rattled and just with confidence in us, we look at each other and have that confidence, too.

“So we just kept going, and Coach Smart did a really good job.”

Smart is in his first season as a college coach after 22 years in the professional ranks, including 19 in the NBA with head coaching stints with the Cleveland Cavaliers, Golden State Warriors and Sacramento Kings.

“First off, kudos to Coach Musselman,” Smart said. “Because I’m not in this environment to coach here if he didn’t offer me the opportunity to grow as a college coach.

“You can be coaching as long as you can in the NBA, but this is a different environment. You’re dealing with much younger players, so [thanks] for him trusting me to take the team out on the road to play.”

Musselman and the players celebrated via FaceTime after the game.

“Incredible resilience and toughness,” Musselman tweeted in congratulating Smart and the team.

The Razorbacks showed their toughness and resolve after LSU moved ahead 56-48 on a Tari Eason dunk with 9:01 remaining.

Smart immediately called a timeout and remembered a breathing exercise he learned as an NBA assistant coach in New York from Erwin Valencia, the Knicks’ physical therapist and assistant trainer.

“I just told our guys to breathe. ‘Forget about what just happened, and breathe, because I need you to get some clarity in your mind right now,’ and that really helped.”

Smart reminded the Razorbacks there were still nine minutes to play.

Several Razorbacks made key plays and Arkansas finished the game on a 17-2 run to hand the Tigers (15-2, 3-2 SEC) their first loss at home in 11 games.

A three-point basket by senior guard JD Notae — who led Arkansas with 19 points — put the Razorbacks ahead 58-56 with 3:31 left

After LSU tied it 58-58 on a dunk by Alex Fudge, Williams hit a three-pointer with 1:12 left for a 61-58 Arkansas lead. Williams improved to 5 of 17 on three-pointers this season, making his only attempt Saturday.

“We missed a switch and left Jaylin Williams wide open for three, which can’t happen,” LSU Coach Will Wade said.

Notae missed a free throw with 22.9 seconds left, but Stanley Umude got the rebound and put it back to push the Razorbacks ahead 63-58.

Au’Diese Toney then clinched it for Arkansas by hitting two free throws with 11.3 seconds left.

“I think we’re playing at a mindset right now with what Coach Smart says — ‘Everything to gain, nothing to lose,’ ” Williams said. “Everybody is already saying we’re at the bottom of the barrel, so we can only go up from here. We might as well leave it all out on the court.”

The Razorbacks had a season-high 19 turnovers, but had a 20-13 edge in points off turnovers and outrebounded the Tigers 41-31 — including 13 offensive boards.

“I mean look, Arkansas made a ton of plays down the stretch,” Wade said. “Notae made some huge shots … We turned the ball over too much, we got outrebounded, we missed some free throws. That’s going to get you just about every time.”

Senior forward Darius Days — who in LSU’s 92-76 victory over Arkansas in Baton Rouge last season had 18 points — was held to three Saturday. Eason and Fudge each scored 13 points.

In the postgame locker room, the Razorbacks celebrated by dousing Smart with water.

“When I walked in, I knew something was up because everybody was quiet and it was real fishy,” Smart said. “I’m sure it was J-Will then JD Notae that kind of instigated all that stuff, along with Devo Davis.”

After the Razorbacks arrived in Baton Rouge on Friday, Smart visited with his mother, Rose, for two hours. He said it was the first time they had seen each other in three years because of covid safety protocols.

“When I went into the house, she didn’t know I was coming,” Smart said. “I told her there was a possibility I might not come. I didn’t know what the protocol would be.

“When she saw me, she was speechless. So that was nice.”

Smart’s mother and other family members attended Saturday’s game and got to watch him coach the Razorbacks to their upset victory.

“To come back with all of them right here, be eight minutes from our house that I grew up in,” Smart said. “That was a great moment.”