Hogs made plays down the stretch 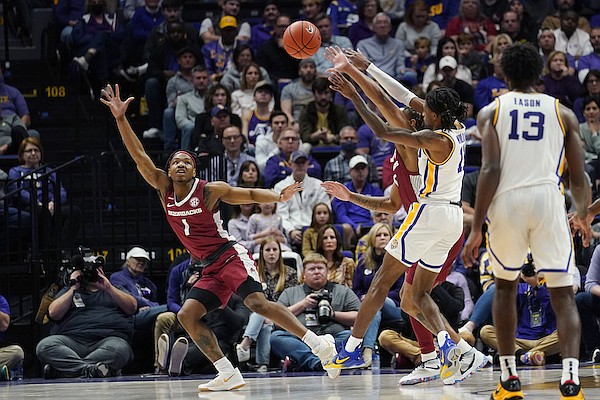 Arkansas and LSU battled for almost 39 minutes to gain an advantage and some momentum.

The whole game the momentum was swallowed up by turnovers and long scoring droughts. But with the game tied at 58-58, sophomore Jaylin Williams pulled off three stunning plays that allowed the Razorbacks to down the No. 12 Tigers in Baton Rouge 65-58.

With 1:25 to play, Williams was falling with the ball and would have been called for traveling, but he alertly bounced the ball off a LSU player and out of bounds giving Arkansas possession.

Just 13 seconds later, Williams pulled up from the top of the key and drained his first three of the day to give Arkansas a 61-58 lead with 1:12 to play.

The icing was on the way.

LSU rushed up court and attacked the basket, but Williams managed to pull himself into perfect position to take a charge that was reviewed but stood.

Williams came into the game with a team-high 17 charges taken.

He finished with 11 points and 12 rebounds, his third consecutive double-double.

It was not a pretty game, but LSU, which was allowing only 56. 5 points per game, favors ugly games.

Maybe not quite as bad as Saturday’s game that had a combined 35 turnovers with Arkansas winning that stat with 19 but had 20 points off turnovers to 13 for the Tigers.

Coach Eric Musselman was watching from home after undergoing surgery to his torn rotator cuff Thursday, but assistant Keith Smart appeared to do exactly the same thing Musselman would have done during the game.

It was a huge victory for the Hogs. They had opened SEC play 0-3 before blowing out Missouri on Wednesday.

Still, heading into the Maravich Assembly Center against LSU — which entered at 15-1 and 3-1 in SEC play and favored by seven — the light at the end of the tunnel could have been a train.

Instead, Williams helped the Hogs turn it into a critical SEC road win.

After his heroics, the Tigers looked confused.

JD Notae, who led all scorers with 19 points and played the last 10 minutes with four fouls, missed the front end of a one-and-one with 22 seconds to play and Arkansas still just up 61-58. But Stanley Umude got the rebound and put it in for a five-point lead.

Au’Diese Toney added two free throws for the Hogs with 11 seconds remaining and notice had been served, the Razorbacks have been down but don’t count them out.

Some of it, but not all of it, was defense that made the game, and especially the first half, sloppy for both teams.

There was also poor shot selection and not protecting the ball.

Arkansas was 0 of 8 on three-pointers in the first half but hit 5 of 9 in the second half, and in a game as close as that one, all of them were critical, especially the one by Williams.

Arkansas opened slow and the Tigers ground out a 16-10 lead only for Williams to step up and make a three-point play.

Then LSU went from being 9 of 18 from the floor to 13 of 30 and endured an almost 4 1/2 minute scoreless stretch but managed to take a 33-31 lead into intermission after trailing for more than four minutes down the stretch.

The Tigers had seven turnovers and the Hogs cashed those in for 11 points.

What helped LSU the most was 30 points from its bench, while Arkansas had 13 bench points.

In the second half, the Razorbacks were prepared for anyone the Tigers put on the floor and the Hogs’ defense was much better, especially down the stretch when they held LSU to 1-of-9 shooting and forced 6 turnovers in the final nine minutes.

It was a team effort, but Jaylin Williams was the difference-maker this time.