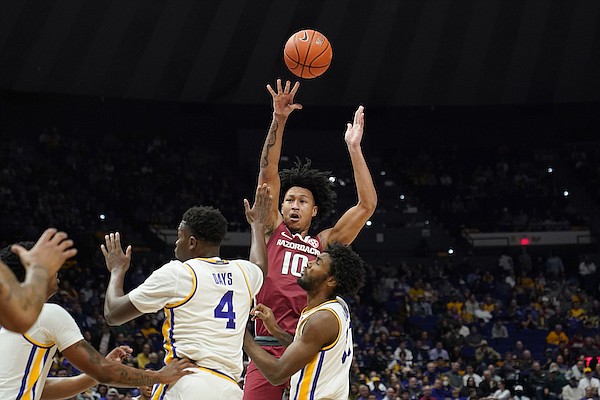 Jaylin Williams had another double-double and a huge finishing stretch to help the University of Arkansas upend No. 12 LSU 65-58 on Saturday at the Maravich Center in Baton Rouge.

Williams had a series of key defensive plays after Arkansas fell behind 56-48, its largest deficit of the game, with 9:01 to play, then drilled a three-point shot from the top of the key with 1:11 remaining to break a tie and give the Razorbacks a 61-58 lead.

Williams said coaches Keith Smart and Gus Argenal told him to be ready to take a big shot.

“ ‘You’re going to get a big shot,’ ” Williams said the coaches told him on the Razorback Sports Network. “ ‘Just be confident and take the shot. Be the player you know you can be. You work on your shot. Take that shot if it’s open,’ and that’s what I did.”

Williams had 11 points and 13 rebounds for his third consecutive double-double, but his defense down the stretch was crucial in the upset.

The 6-10 sophomore from Fort Smith drew a season-high tying four charges, including two in the final seven minutes that proved to be difference makers.

“We got defensive stops and we turned it into offense,” Williams said on the Razorback Sports Network.

Williams held his ground as Eric Gaines drove the lane and fed teammate Alex Fudge for a dunk. But while Tiger fans cheered what they thought was the alley-oop slam, Gaines was called for a foul for slamming into Williams.

After Williams’ three-pointer, his fourth of the season on 18 attempts, with 1:11 remaining, he got just outside the defensive arc to draw a charge on Brandon Murray, who fouled out, with 59.2 seconds left.

“Obviously Jaylin Williams, who had made three threes all year coming into the game, made the big three,” LSU Coach Will Wade said on the LSU Sports Network. “He made some huge defensive plays at the end, stepping up and taking charges.”

“First, challenging shots at the rim as a shot blocker, then, being aware to be out of the restricted area to take those charges,” Smart said. “He’s not afraid to give up his body. He gives his body up a ton.”

Williams, who also drew four charges in the Razorbacks’ 73-67 win over Cincinnati on Nov. 23, leads the team with 21 total charges drawn.

Arkansas’ athletic programs, which have enjoyed a big run at LSU over the past year, pulled off a historic first Saturday.

For the first time in a 12-month period, the Arkansas baseball team won a series in Baton Rouge, the football team downed the Tigers at Death Valley and the men’s basketball team won at the Maravich Center. On top of that, Coach Courtney Diefel’s softball team clinched their first SEC regular season title with a series win in Baton Rouge on May 1-3.

The No. 1 ranked Arkansas baseball team under Coach Dave Van Horn beat the Tigers 7-0 and 17-10 at Alex Box Stadium on April 30 and May 1 before falling 5-4 in the second game of a doubleheader.

Coach Sam Pittman’s No. 25 Razorbacks clipped LSU 16-13 in overtime on Nov. 13 to reclaim the Golden Boot Trophy after a five-year hiatus.

Assistant coach Keith Smart, working in Coach Eric Musselman’s absence, led the Razorbacks’ upset of the No. 12 Tigers on Saturday.

Arkansas guard Stanley Umude cleaned up a missed front end of a one-and-one free throw opportunity by JD Notae to put Arkansas ahead 63-58 with 22 seconds remaining.

Notae’s free throw came up short off the front of the rim and the Tigers’ Alex Fudge and Tari Eason collided into each other while battling Au’Diese Toney for the rebound on the right block. Umude, gliding in from the left block, collected the loose ball and converted an unguarded layup for a five-point lead.

“That’s the first free throw offensive rebound we’ve given up all year,” LSU Coach Will Wade said on the LSU Sports Network. “Look, give Arkansas credit. They made a bunch of plays and we couldn’t close the game out.”

Arkansas acting Coach Keith Smart said he got a postgame hug from former LSU and San Antonio Spurs standout Collis Temple Jr., who is on LSU’s board of supervisors.

Smart. a native of Baton Rouge, said Temple helped him get to school and supported him when his younger sister passed away.

“Collis and his family were right there with us,” Smart said on the Razorback Sports Network. “For him to come and hug me, he just said, ‘Man, this is probably the only time that I’m going to wrap my arms around someone who just beat a Tiger.’

“I pointed to my mom up in the stands and right away of course there was a connection right away.”

Arkansas guard Davonte Davis took a hard spill onto his face and lost a tooth after being fouled from behind by LSU’s Tari Eason with 35 seconds left in the first half.

Eason hacked Davis’ left arm as he drove in for a dunk, Davis’ hands got hung up in the net, he whirled and landed on his hands, but his face drove into the hardwood.

The officials reviewed the tape and determined it was not a flagrant foul. However, JD Notae came off the bench to shoot the free throws to draw Arkansas within 32-31 as medical staff attended to Davis. The Razorbacks tried to sub Davis back in with the clock stopped, but LSU Coach Will Wade protested.

The on-court officials were frustrated with the official scorer for not preventing Davis from checking in, which is disallowed when a player takes free throws for someone who is pulled out of the game.

LSU, the top steals team in the nation with an average of 12.1 per game, was up to its usual tricks in that department.

The Tigers had 14 steals, double the Razorbacks’ seven. However, LSU struggled at converting steals and Arkansas turnovers into points. The Razorbacks outscored their hosts 20-13 in points off turnovers.

Arkansas enjoyed a big edge in the rebounding department, outrebounding the Tigers 41-31, including 28-20 on defensive glass.

“We just weren’t as clean with the ball as we needed to be, and we got blasted on the glass,” LSU Coach Will Wade said on the LSU Sports Network. “Our defensive rebounding has been an issue for us all year. We got beat 10 on the glass.”

Arkansas’ Jaylin Williams had a game-high 13 rebounds, while guards Davonte Davis and Stanley Umude had eight and six rebounds, respectively.

Arkansas held Darius Days and Brandon Murray, the Tigers’ top-scoring starters with 14.7 and 9.2 points per game respectively, to a combined five points on 2-of-13 shooting.

“Gus Argenal as far as scouting, he didn’t want their star players to play well tonight,” Smart said on the Razorback Sports Network. “And that’s what he did. We did a great job of taking their star players out of the game and other guys made plays.”

Said LSU Coach Will Wade, “They had a good game plan. It took us a minute to get into our offense crossing half-court, kind of what we do to teams, kind of making them take a while to get into their offense.”

The Razorbacks had to wait until the first minute of the second half, but they did continue their streak of games with a made three-pointer to 1,092 games.

JD Notae was given a little cushion at the top of the circle before he stepped back to give himself more space and drained a three-point shot to break the Hogs’ 0 for 8 start from three-point range and bring Arkansas within 35-34 at the 19:10 mark of the second half.

LSU Coach Will Wade was furious when his players failed to get back after a made basket and allowed a dunk by Au’Diese Toney late in the first half.

After Alex Fudge made a three-pointer to give LSU a 23-22 lead with 6:33 left, Toney was dunking on the other end seven seconds later on a long pass from Davonte Davis.

Wade immediately called timeout in a terse manner and lit into his team, shouting, “What are you doing?” before carrying on with intensity for several more seconds, clearly irked by the defensive lapse.

LSU fans gave sarcastic applause when Arkansas was called for its first foul at the 7:56 mark of the opening half on a reach-in by guard JD Notae.

At that point, LSU had already racked up six team fouls, including two each by 7-footer Efton Reid and guard Brandon Murray.

Arkansas forward Kamani Johnson was unavailable to play after suffering a turned ankle in the Razorbacks’ 87-43 win over Missouri on Wednesday. Johnson traveled to Baton Rouge, but was fitted with a walking boot.

The Tigers played without guard Xavier Pinson, who sat out his second consecutive game after also suffering an ankle sprain.

ESPN’s Karl Ravech and Jimmy Dykes, the former Arkansas head women’s coach, provided the broadcast of the game from remote locations, but they ran into trouble.

Dykes’ audio had crackling going on for several minutes before he went silent for a considerable stretch of the first half. Ravech described it as technical difficulty and Dykes was not able to return to the broadcast.