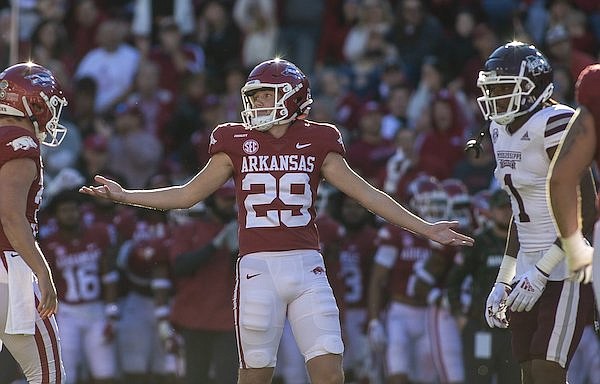 Arkansas kicker Cam Little (29) celebrates a field goal during a game against Mississippi State on Saturday, Nov. 6, 2021, in Fayetteville.

FAYETTEVILLE — University of Arkansas place kicker Cam Little was named to the Freshman All-America team by the Football Writers Association of America (FWAA) on Monday.

He is the 11th Razorback to earn Freshman All-America honors from the FWAA, which started naming the team in 2001. Safety Jalen Catalon was named to the team last year after racking up 99 tackles and three interceptions.

Little’s 20 field goals tied Todd Wright (1989) for the third-most in a single season by an Arkansas player, and his field goal percentage (83.3%) ranks fifth in school single-season history.

Little (106) put together the sixth 100-point season for an Arkansas kicker, tying Alex Tejada’s output from 2009.