Smart's decision works out for Hogs 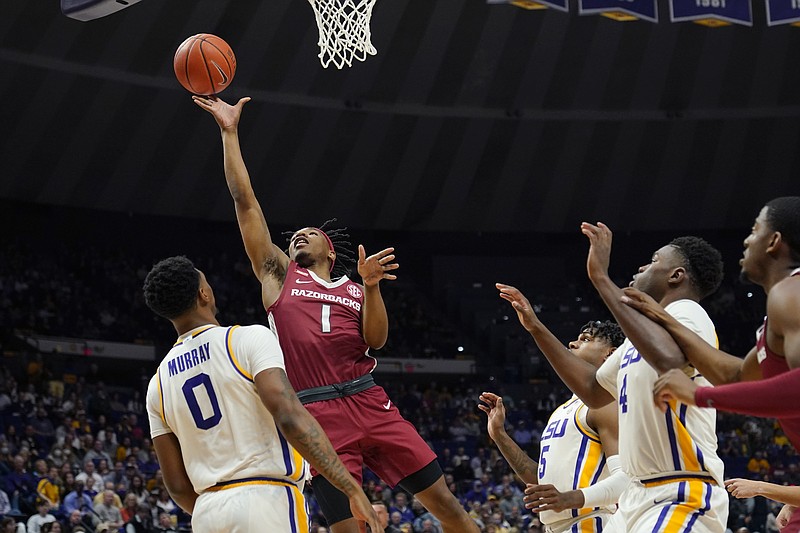 FAYETTEVILLE -- It wasn't a coincidence LSU got its largest lead against the University of Arkansas when JD Notae went to the bench.

Notae, a senior guard averaging 18.8 points to share the SEC scoring lead with Vanderbilt's Scotty Pippen Jr., drew his fourth foul trying to take the ball away from Mwani Wilkinson.

Keith Smart, the Razorbacks' interim head coach, had little choice but to take Notae out of the game with 10:10 left.

Then Tari Eason hit two free throws and converted an Arkansas turnover into a dunk.

Smart called a timeout and got Notae back in the game, four fouls and all.

Along with leading the SEC in scoring, Notae also leads in steals, averaging 2.6.

"JD is a guy that is very opportunistic," Smart said. "He wants to get a steal.

"I kept sharing with him, 'You've got to be disciplined and not go for steals. Just trust the defense and trust your teammates that they're going to be in positions to help you if you're beaten off the dribble.' "

Notae listened to Smart, didn't draw a fifth foul and came up with plenty of big plays to help the Razorbacks beat the Tigers 65-58 at the Maravich Assembly Center.

The Razorbacks outscored LSU 17-2 the final 6:55 with Notae accounting for 11 points either with an assist or a basket.

Even Notae's misses down the stretch turned out well for the Razorbacks as they got two baskets on offensive rebounds when he had a three-point attempt and free throw that didn't go down.

"There was a timeout and I said, 'Now JD, every time that you get a bucket or we go on a little run, you always reach and get a good little steal,' " Williams said. " 'We don't need that this game. We need you to stay in the game. Don't pick up that fifth foul. Just play solid defense.'

"He did a great job managing his fouls throughout that last [nine] minutes."

Arkansas began its comeback when Notae got a defensive rebound and assisted on a layup by Trey Wade to cut LSU's lead to 56-50.

Then Notae assisted on a three-point basket by Davonte Davis that made it 56-53.

Notae got a steal -- not by reaching, but when he grabbed an errant pass by Eric Gaines -- and missed a three-pointer, but Au'Diese Toney got a put-back basket to pull the Razorbacks within 56-55.

LSU tied it 58-58 on a dunk by Alex Fudge, then the Razorbacks regained the lead 61-58 when Williams hit a three-pointer -- with an assist by Notae.

Notae went to the line with 22.9 seconds left and missed the front end of a one-and-one, but Stanley Umude got the rebound for Arkansas and scored to make it 63-58.

With Toney getting ready to shoot two free throws and LSU fans headed for the exits, Notae turned and put his arms up as if to ask where were they going?

Toney hit both shots to cap the victory.

Notae finished with 19 points, 4 assists and 3 rebounds in 27 minutes.

Arkansas (12-5, 2-3 SEC) was plus-18 points with Notae in the game, including plus-15 when the Razorbacks closed out the Tigers.

The game marked the only loss in 11 home games for LSU, which last week beat Kentucky and Tennessee at the Maravich Assembly Center.

Since Notae missed the SEC opener against Mississippi State because of covid safety protocols, he has averaged 23 points, 3.3 rebounds and 3.1 assists against Vanderbilt, Texas A&M and LSU. He also has hit 24 of 50 shots, including 9 of 21 three-pointers.

"JD has been playing really great," Williams said. "I talk to him all the time, and I tell him, 'JD you're such a great player because you can create for anybody and everybody on the offensive end.'

"He's been great on the defensive end, he's been rebounding, taking care of the ball."

"From an offensive standpoint, JD has the ability to shoot the three-ball, to get to the mid-[range] area, and also get and finish at the rim with both right hand and left hand," Smart said. "And that's pretty good for a player.

"We've also got him playing more point guard ... Now we've just got to keep working with him on vision. 'What do you see when you go to certain areas? You can't always be thinking it's going to just be JD, you have to also make plays for your teammates.'

"It's a development habit for him. What we do in our drills everyday ... to get him to see things on the floor.

" 'Invite the [defensive] switch, back it out and go when you're ready to go for yourself or for a teammate,' and that's what he's done."