Hogs aim to impose will on 'desperate' Gamecocks 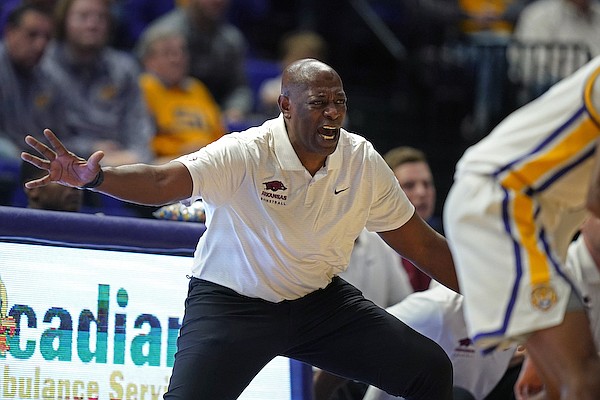 FAYETTEVILLE — The Arkansas Razorbacks should know how the South Carolina Gamecocks feel going into the teams’ matchup tonight in Walton Arena.

A week ago the Razorbacks (12-5, 2-3 SEC) were where the Gamecocks are now, struggling to win in SEC play.

The Razorbacks started 0-3 in the conference for the first time since 2009, then turned things around last week when they pounded Missouri 87-43 in Walton Arena and upset No. 12 LSU 65-58 on the road.

“We shared with the team — what do you think South Carolina’s thinking?” University of Arkansas interim Coach Keith Smart said. “ ‘Hey, here’s a team, Arkansas, backs were against the wall and they had a big impressive win against Missouri. They went to LSU and they won.’

“So South Carolina’s probably saying from a teaching standpoint, ‘We can do the same thing [Arkansas] did.’ ”

Smart will lead the Razorbacks for the second consecutive game in place of Coach Eric Musselman, who is continuing to recover from shoulder surgery.

“Everything that we did, Coach Muss taught us,” sophomore forward Jaylin Williams said on the Arkansas radio network after the LSU game. “He gave us a plan and we just executed it and Coach Smart did a great job at coaching and stepping up in his role, and I felt we did good as a team.”

Frank Martin, in his 10th season as South Carolina’s coach, said Arkansas losing its first three SEC games — on the road at Mississippi State and Texas A&M and at home to Vanderbilt — shows the conference’s quality depth.

“We all overreact every time somebody loses in the SEC,” Martin said. “It’s a really hard league.”

Martin said the Razorbacks are the same team that started 9-0 and was ranked as high as No. 10 in The Associated Press poll.

“It’s not like they’ve got a new coach or different players,” Martin said. “They’re good, but our league’s really good, and winning in our league is really complicated right now. You can play well and lose. There’s not an easy out in our conference.

“There was a day — and I’ll use my school as an example — where coaches would see South Carolina and they’d say, ‘OK, that’s a win,’ and they were good and they moved on.

“There’s not a team in our league where you say, ‘Alright, if I can get through this week 2-0, then we can get ready for Kentucky and Arkansas or whoever.’ That doesn’t exist right now.”

Georgia is the only SEC team without at least one conference victory.

Texas A&M, Mississippi State and Vanderbilt are a combined 9-3 in SEC play. South Carolina got its SEC victory at Vanderbilt, 72-70, in the Commodores’ next game after they won at Arkansas.

“It’s not that Arkansas didn’t play well,” Martin said. “It’s that the other teams are really good. And if you don’t play really, really well, you’re probably not going to win in this league this year.”

Smart said the Razorbacks have continued to progress in SEC play.

“I think you stay true to what we started off with this summer with Coach Muss and all the concepts that we were teaching,” Smart said. “And eventually at some point all that is going to start coming to a head and you start playing well.

“I think there’s a carryover from the last four games that you saw some things starting to take place throughout this basketball team, and it’s all just started coming together these last two games.”

Williams said the Razorbacks are feeling good about themselves.

“The team is really confident right now,” he said. “We’re all playing how I think we should be playing.

“I think that we’ve got to look forward to the next game and play just as hard, and then we can get on a run.”

“Here’s a team coming in that’s going to be desperate, a team that has their backs against the wall,” Smart said. “And if you don’t go out and try to impose your will on the game, you can allow this team to play with you.

“Because they don’t care what you just did. It’s all about what you’re going to focus on getting ready to play this game here.”