Razorbacks need to rely on defense rest of season 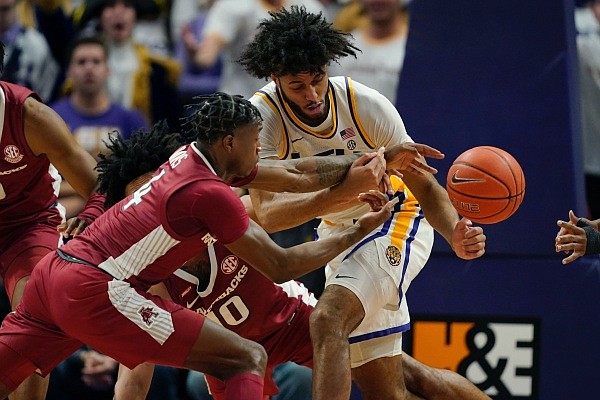 Arkansas’ 65-58 win over LSU was not an upset, just further proof that anything can happen in the SEC in any given game.

It was another illustration that sometimes the Razorbacks' best offense is their defense.

With 9:01 to play, LSU had taken a 56-48 lead and interim head coach Keith Smart told his team during a time out to take a deep breath.

When they retook the court it was with a defensive vengeance.

LSU would finish the game 1 of 9 shooting – every shot and every dribble contested by the Razorbacks – and suffer six turnovers.

Arkansas, the team that wasn’t breathless, went on a 17-2 run and came away with a well-earned win because of its defense.

Absolutely, it is the wild and crazy SEC. But it mostly will depend on one thing: how hard the Razorbacks play on defense.

In 2018, Justice Hill led Little Rock Christian to a state championship in football.

As the quarterback, he passed for 3,084 yards and 37 touchdowns, but the son of Fitz and Cynthia Hill, graduates of Ouachita Baptist, where Fitz excelled at receiver for the Tigers, had a passion for basketball.

Last Saturday against Belmont, which was also undefeated in league play, Hill scored 36 points to lead the Racers to an 82-60 win. Hill hit 8 of 11 three-point attempts.

He has started all 16 games, averaging more than 28 minutes per game, and is averaging 13.9 points. Hill has hit 46% of his threes.

The Racers have won four consecutive conference games since a 71-58 loss to Auburn, which is 5-0 in SEC play, 16-1 overall and No. 2 in the country.

The University of Arkansas-Little Rock becomes a member of the Ohio Valley Conference next season.

Fitz Hill is the former head football coach at San Jose State and assistant coach at the University of Arkansas. He also served in Desert Storm during the Gulf War.

Justice Hill is a sophomore.