Shiloh's Odom honored to have walk-on offer from Razorbacks 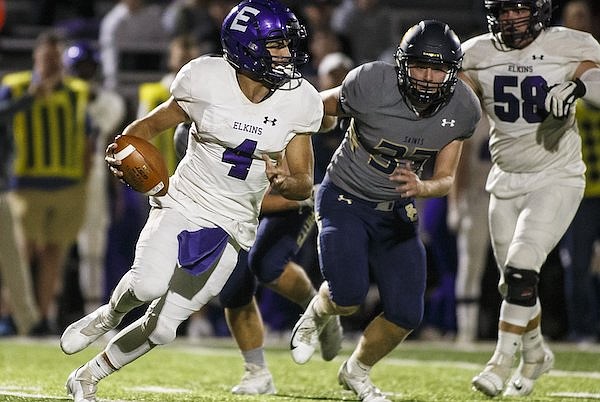 “It was one of the best things I’ve gotten to experience,” Odom said.

Arkansas has a strong history of walk-ons earning scholarships and going on to have great careers. Former linebackers Grant Morgan and Hayden Henry are prime examples.

Morgan won the Burlsworth Trophy in 2021 as the nation's best football player who began his career as a walk-on.

“Lots of great Razorbacks playing now come from walk-on spots, and I’m super happy to be in the same position,” said Odom, whose father, Barry, is the Razorbacks' defensive coordinator.

Odom has seen firsthand how Pittman and the Arkansas staff treat walk-ons.

“The awesome thing is at Arkansas, I have learned, there is no difference from a scholarship athlete and a walk-on,” Odom said.

Odom, 6-2, 220 pounds, was one of about 60 prospects who visited Arkansas last Saturday. Odom was able to become more educated about the program.

“Loved meeting with coaches I already know well and getting to experience what living like a Razorback would be like — apartments, weight room, etc.,” Odom said.

Arkansas athletes, including football players, recently moved into new apartments that rival any living quarters in the SEC.

“The Marshall is a really cool spot,” Odom said of the apartment complex. “Super modern and spacious. Fob entry on all the doors, lots of windows, furniture is comfy and all the rooms look great. Big TVs, too.”

Odom recorded 24 tackles, 1 tackle for loss and 1 quarterback hurry while helping the Saints to the Class 4A state title game in 2021. He backed starters Noah Dejarnett and Kaden Henley, a Razorback signee.

Shiloh Christian coach Jeff Conaway said Odom will also play on the line and at fullback in the fall.

"We are excited to see JT perform next season," Conaway said. "He’s working very hard and becoming more versatile in his skillset. He’s fun to be around and brings life to our team."

Should he become a Razorback, Odom said he is comfortable knowing his father and linebackers coach Michael Scherer will put him in the best possible position to succeed.

“I fully trust them to make the best decision on me to help the team,” Odom said. “Coach Scherer is a super awesome coach, and because I’ve known him for a long time it would be super exciting to see what we can do together at linebacker.”

“I would really love to be a part of the program,” Odom said.

Barry Odom was a four-year starting linebacker at Missouri and ranks in the program's top 10 with 362 career tackles. He was a team captain as a senior at Mizzou in 1999.

Having his father’s insight helps give JT Odom an edge.

“It’s awesome having him coach me and work me out because of his experience,” he said. “He understands it deeply and has made me a much much better player because of it.”