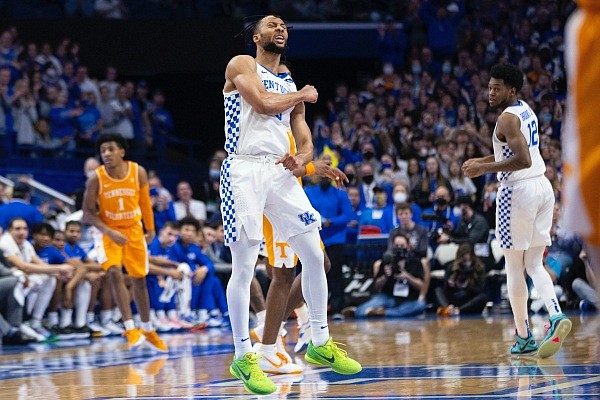 FAYETTEVILLE — No. 12 Kentucky enters a huge week that will go a long way toward sorting out the top of the SEC standings after the Wildcats blitzed Tennessee 107-79 on an emotional day at Rupp Arena on Saturday.

Texas A&M and Auburn are the only two remaining unbeaten teams in SEC league play. The Tennessee game started a stretch of five games for Kentucky in which their opponents had a combined record of 64-13.

Kentucky memorialized the loss of former Coach Joe B. Hall, who led the Wildcats to the 1978 NCAA Championship at the Checkerdome in St. Louis, and passed away at age 93 overnight Friday. Coach John Calipari carried a rolled-up program in his hand, a tribute to Hall which he says he’ll continue through the rest of the season. The Wildcats opened the game in a 1-3-1 defense, another nod to Hall.

“The greatest thing in all this, he knew what people thought of him and how much he was appreciated,” Calipari said of Hall. “Our fans have been great to him. He’s a mentor and a friend to me. … He was in our practice four days a week. … I’m just going to miss him.”

The Wildcats did Hall proud with incendiary shooting in the wipeout of Tennessee, which had been ranked No. 2 in defensive efficiency per KenPom.com.

All of Kentucky’s wins this season have come by double figures.

Tennessee Coach Rick Barnes had been 3-3 at Rupp Arena in his prior six seasons, including wins in the Vols’ last two trips.

The Tigers who have opened SEC play at 5-0 for the first time since 1999, peaked at No. 2 early in the 1999-2000 season, the year after Cliff Ellis’ squad won the SEC regular-season championship.

Auburn will warm up for Saturday’s showdown against Kentucky with a Wednesday home game against struggling Georgia at 8 p.m.

The Bulldogs (5-12) are the lone winless team in league play and they have lost six games in a row, including four at Stegeman Coliseum. The streak started with an 86-84 setback against East Tennessee State, followed by a 77-60 loss to Gardner-Webb before SEC play started.

Texas A&M and Auburn are the SEC’s only unbeaten teams in league play this week, but the pollsters are not impressed with one of the two.

The Aggies (15-2), riding an eight-game winning streak, are not in The Associated Press Top 25 and their NET ranking of 51 says they’re a bubble team for the NCAA Tournament at this point. They can take a big stride toward respectability in Wednesday’s game against No. 12 Kentucky at Reed Arena.

Texas A&M fell behind Missouri 12-0 in Columbia, Mo., on Saturday and also trailed by 13 points later in the first half.

At halftime, Coach Buzz Williams said he told his team they weren’t playing with enough physicality, execution or energy to win on the road. That changed in the second half of the 67-64 win by the Aggies, their sixth in the last seven meetings at Missouri.

“Everything that I told them at halftime was that this is what we need, Williams said on the Aggies’ radio broadcast. “Because we haven’t arrived. We could have for sure been in a different position at the end against Georgia.

“And as you climb the mountain, whatever figurative mountain you’re climbing, I think it’s human nature to think it’s gonna get easier. It actually gets harder. The air becomes thinner. And I told them at the end of the game against Ole Miss, there’s a difference in hunting and being the hunted. And we’re not either one. And regardless of record and regardless of locale, our mentality has to continue to grow. Our identity is improving. What we want to be known for is developing. But we’ve played two weeks in conference play.”

CBSSports.com’s Jerry Palm moved Auburn to the No. 1 overall seed in his NCAA Tournament bracket projection on Monday.

Palm had the Tigers at the top of the Midwest Regional, projected to face the winner of Alcorn State vs. North Carolina-Wilmington.

Auburn was one of five SEC teams in his latest projection, with No. 2 seed LSU, No. 5 seed Kentucky, No.k 6 seed Tennessee and No. 7 seed Alabama also included.

Texas A&M was in his “first four out” along with Indiana, Minnesota and St. Louis.

The Tide did not lose back-to-back games last season while going 26-7, winning the SEC regular season (16-2) and conference tournament and advancing to the Sweet 16. Coach Nate Oats got a pay raise to $3.225 million and a contract extension through the 2026-27 season last February.

Former LSU Coach John Brady, now serving as an analyst on the LSU Sports Network, credited the Arkansas coaching staff for a strong defensive game plan after the Razorbacks’ 65-58 win over the No. 12 Tigers on Saturday.

“They did a nice job on Days, making it difficult for him to catch, and when he did catch they were right there making him put it on the floor to create his own shot,” Brady said on the network broadcast. “He did that one time. I think Arkansas did a nice job with the length they have to remove him from the game.”

“I think those were two keys. They did a nice job on Days. Although Eason scored 13 points, he never got into the flow of the offense and had the streaks of scoring as he normally does when LSU wins games at home.”

Molinar was named SEC Player of the Week after averaging 26 points, 5.5 assists, 4.5 rebounds and 2 steals in wins over Georgia and Alabama last week. Molinar, of Panama City, Panama, is the only SEC player to score in double figures in all of his team’s games this season. Arkansas guard JD Notae has scored in double figures in every game he has played, but he sat out the Hogs’ loss at Mississippi State on Dec. 29 due to illness.

Smith and Washington were named SEC co-freshmen of the week. Smith, a 6-10, 220-pounder from Fayetteville, Ga., averaged 20 points, 5 rebounds and 2 blocks in wins over Alabama and Ole Miss, including a career-high 25 points on 8 of 14 shooting, in a win at Alabama.

Washington, a 6-3, 197-pound guard, averaged 21.5 points, 4.5 assists and 3 rebounds in wins over Vanderbilt and Tennessee. He has won four consecutive freshman of the week honors in the SEC.

The Mississippi schools will get their two-game set wrapped up quickly, as Ole Miss is scheduled to take on Mississippi State at Humphrey Coliseum on Saturday at 3 p.m.

The Rebels notched an 82-72 victory over the Bulldogs at SJB Pavilion on Jan. 8 in their first meeting. This second Egg Bowl on the hardwood will be the first of the SEC’s arch-rival pairings to go into the books this season if it is played as scheduled.

“This, this is what it’s about, and I want these kids to experience this. That’s why you come here.” — Kentucky Coach John Calipari on the atmosphere with 20,000-plus fans at Rupp Arena on Saturday vs. Tennessee

“It is historic, and it does matter, and it does mean something. That’ll be a proud moment for Auburn. I understand it doesn’t mean much right now, but it still makes a very strong statement.” — Auburn Coach Bruce Pearl on Saturday on the potential to be ranked No. 1

“As hard as it is to win games, we have to find ways not to beat ourselves. Some of those turnovers … I’ll be struggling to watch some of those, just especially when there’s nothing that took place to make you turn the ball over, that’s hard.” — Missouri Coach Cuonzo Martin after the Tigers blew a 12-0 lead in a 67-64 home loss to Texas A&M

“It was almost like they had a magnet in the rim. … You simply can’t give a team this good that many points off turnovers. They’re gonna shoot 80% if you let them get those run-out dunks and those run-outs where they’re going to get to the corner.” — Tennessee Coach Rick Barnes on Kentucky’s hot shooting on Saturday

4 – Poll points separating Auburn from No. 1 Gonzaga on Monday, denying the Tigers their first appearance at No. 1 in the Associated Press Top 25