Briles reportedly a candidate for OC at Miami 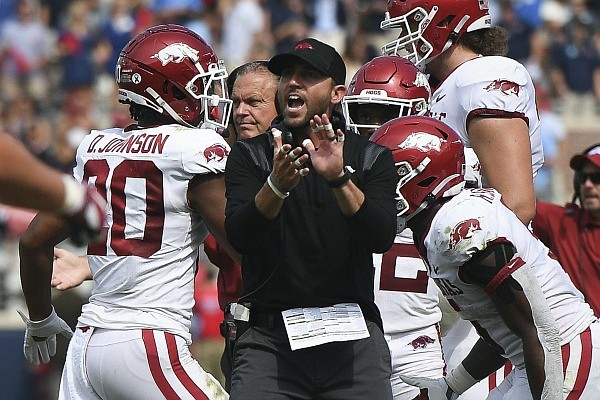 On Tuesday, Brett McMurphy of The Action Network reported the Hurricanes had made an offer for Briles, although that could not be independently confirmed by the Arkansas Democrat-Gazette. Briles’ name had surfaced weeks ago as a potential candidate for the opening, soon after Mario Cristobal was named the Hurricanes head coach on Dec. 6.

Sources with knowledge of the situation said it was more likely Briles, whose $1 million contract is in the midst of being renegotiated, remains with the Razorbacks for a third season.

Briles, 39, was in Atlanta and Nashville, Tenn., recruiting on behalf of Arkansas and Coach Sam Pittman on Tuesday and touting it on his Twitter account. While in Atlanta earlier in the day, Briles posted a video on social media of his rental vehicle that ended with a close-up of a Razorback cap on the dashboard.

The McMurphy report was met with a counterpoint by Mike Ryan Ruiz, the executive producer of “The Dan Le Batard Show” based out of Miami. Ruiz posted on his Twitter account he understood Miami had spoken to Briles “but a formal offer wasn’t made at the time” and that the only active offer for the position is “not to Briles.”

Toledo Coach Jason Candle is reportedly also a candidate for the Hurricanes’ offensive coordinator job after posting a 45-27 record in six-plus seasons with the Rockets.

Briles has turned the Arkansas offense into a formidable unit in two seasons under Pittman, with pocket quarterback Feleipe Franks in 2020 and dual-threat quarterback KJ Jefferson last season.

The Razorbacks finished with 227.8 rushing yards and 213.9 passing yards per game while going 9-4 in 2021, the first season Arkansas has averaged 200-plus yards rushing and passing since 1971.

Pittman has been outspoken about wanting to keep his entire staff in place, mentioning on national signing day on Dec. 21 several assistants had already begun negotiations for raises.

Arkansas Athletic Director Hunter Yurachek, speaking to the Democrat-Gazette on Dec. 17, said he wanted to reward the football coaches for having a strong season.

“It’s important that we retain as many if not all of our assistant coaches moving forward. Now we have coaches on our staff that have aspirations eventually to being head coaches. We don’t want to stop them from that, but we don’t want them to take what I would consider a lateral move because of the compensation they may receive.”

Briles, who last year received a two-year extension through February 2023, has been working under a contract that pays $1 million per year since his hiring in December 2019, though he and all the other coaches on staff accepted a temporary salary reduction from August 2020 through June 2021 as part of covid reductions for the department.