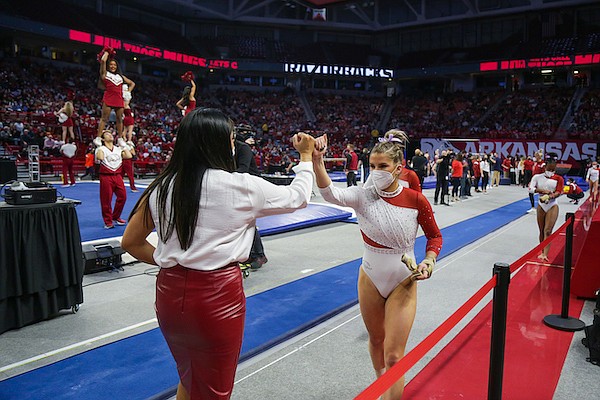 Arkansas gymnast Cami Weaver (right) is shown during a meet against Auburn on Friday, Jan. 14, 2022, in Fayetteville.

Weaver’s right knee buckled on the vault landing in her first collegiate routine in the first rotation of the meet against No. 8 Auburn.

“She tore her ACL, which is super unfortunate and a huge loss for us,” Arkansas Coach Jordyn Wieber said on a video conference with reporters Wednesday. “My heart goes out to her. She’s still going to be an important team member for us.

“She brings a super-high level of energy and fun in the gym. I know she’ll continue to do that through the recovery with her injury. But just super bummed for her. She had a great preseason and was looking awesome. It was just kind of a flukey vault for her and just the reality of our sport sometimes.”

Auburn moved up a spot in the national rankings to No. 7 this week while Arkansas jumped four places to No. 11 in advance of Friday’s meet at No. 5 LSU.

LSU had to postpone its road meet last week at No. 8 Missouri due to covid issues within the LSU program.

Wieber said covid problems, which has led to some quarantining, are still lingering for the Gym'Backs but that both Arkansas and LSU are in position to compete on Friday.

“I think every program is dealing with that a little bit right now,” Wieber said. “I know we are. But I keep reminding myself it’s still January and our goal is to be at our best with our top six in the lineups toward the end of the season and some different athletes are getting experience on events that maybe they wouldn’t have if we weren’t dealing with covid right now. But I know the team is keeping a good attitude about it.”