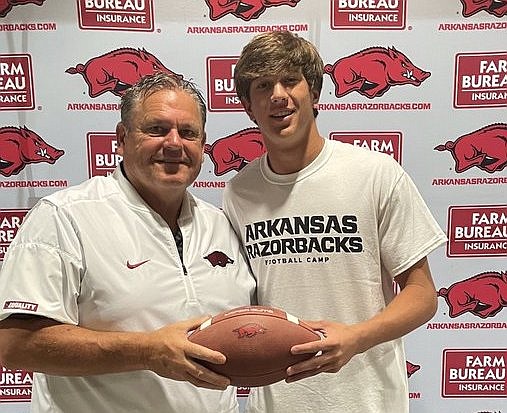 Relationships play a huge role in recruiting and for some prospects their connection with the Arkansas staff continued to grow during last Saturday’s Prospect Day.

Sophomore receiver Parker Livingstone, 6-4, 185 pounds, of Lucas (Texas) Lovejoy, made his third trip to Fayetteville since July for Prospect Day.

“There were a lot of things that stood out, but for me the one thing about Arkansas is every time I visit the coaches are just so welcoming and so amazing. Just makes me feel like Arkansas could be my home and future,” said Livingstone, whose brother enrolled at Arkansas for the spring semester. “Another thing that stood out was facilities. Everything there is just so awesome – to the indoor to the meeting rooms to the living places. It just stood out.”

He has offers from Arkansas, Florida State, Pittsburgh, Tennessee and Kansas.

Livingstone's great grandfather, A.B. Bradley, lettered for Arkansas basketball in 1942-43 before being drafted into World War II. His grandmother’s uncle played football for the Razorbacks in the 1940s.

Junior offensive tackle Connor Stroh, 6-7, 355 of Frisco (Texas) Wakeland, also made the trip to Arkansas, his second since visiting for Arkansas’ 31-28 victory over Mississippi State in November.

“It was great,” Stroh said. “I had a great time. I love the facilities, I love the coaches. I got to see the dorms and they are great. I got to learn all about the academics. I love it.”

He has offers from Texas, Florida State, Baylor, Indiana and SMU, but would love to add one from the Razorbacks.

“This place is amazing,” he said. “I love the campus here.”

“We shared some stories of our lives,” Stroh said. “I got to talk to Coach (Sam) Pittman, too. He said he watched my tape and he loves it, so we’ll see what happens.”

Another prospect that hopes to see an Arkansas offer come his way is Star City junior athlete CJ Turner.

Turner, 6-1, 209 pounds, impressed the Razorbacks coaches during a June camp last year, when he ran a handheld 4.48 seconds in the 40-yard dash and had an impressive 9-foot, 10-inch broad jump. He also recorded a 33-inch vertical.

Unfortunately, he had a setback after suffering an ACL injury early in the season, but his rehab is going well.

“I’m like at the midway point,” Turner said. “I’m about to start running."

He has offers from Kansas, Colorado, Memphis and Arkansas State.

Turner recorded 58 tackles, 16 pass breakups, 1 sack, 1 forced fumble and 1 interception while playing safety, cornerback and linebacker in 7 games for the Bulldogs as a sophomore. He rushed for 452 yards as well.

If he comes back to Arkansas this summer for a camp and performs well, an offer from the Razorbacks could follow.

“They just want to me get healthy and come back here in the summer and if I preform we’ll be in good hands,” he said.

The Razorbacks like him at linebacker. He said Scherer is eager to see him this summer.

“He said to get healthy. He wanted to see me back here,” Turner said.