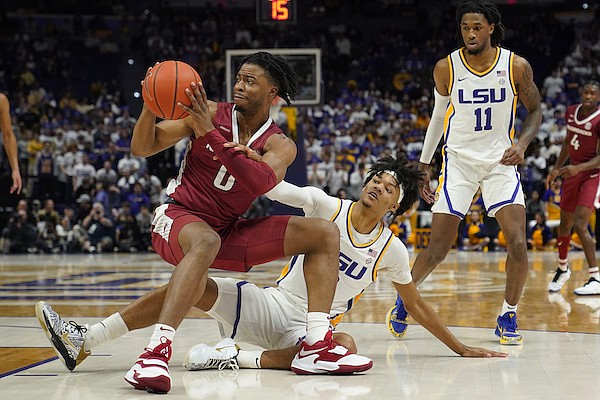 Musselman quickly changed the subject to the 6-6 Umude’s rebounding.

“Stanley only had two defensive rebounds,” Musselman said after the Mississippi State game.

“There’s a lot of things we have to keep getting better at for sure. One of them being Stanley rebounding at the defensive end.”

Umude had three rebounds — along with 10 points — when Arkansas lost 86-81 at Texas A&M, though he was limited to 23 minutes before fouling out.

Umude had five rebounds against Missouri and six each at LSU and against South Carolina. It’s Umude’s best three-game stretch for rebounding this season.

“All the coaching staff has been on me about using my athleticism to get more rebounds,” Umude said. “Even when I score well, [Musselman] is on me about my rebounding. Because he knows I can score. People know I can score.”

Umude scored 1,520 points at South Dakota and averaged 15.1 points in 101 games, including 21.6 last season when he scored 30 or more in five games with a career-high 41 against South Dakota State.

“I’ve just got to make sure I’m doing all the other things to help us win,” he said.

Umude helped Arkansas get its biggest win of the season at No. 12 LSU when he rebounded a missed free throw by JD Notae and scored with 22 seconds left to put the Razorbacks ahead 63-58.

LSU Coach Will Wade said it was the first offensive rebound the Tigers had allowed after a missed free throw all season.

“One of the biggest [plays] of the year, Stanley’s offensive rebound,” Arkansas assistant coach Gus Argenal said. “That’s something we had really worked on.

“We do a lot of drill work, and to see a drill come into play in a game like that, where he makes an offensive rebounding move, gets in the paint and finishes like that, that was so huge for him. And also for his teammates, their confidence in him.”

Umude credited teammate Au’Diese Toney — who was on the opposite side of the lane — for helping him secure the rebound on Notae’s missed free throw.

“Au’Diese actually really tipped the ball,” Umude said. “He crashed really hard on that play, so credit to him getting in there. I was just able to grab it and put it back.”

Umude averaged 5.4 rebounds at South Dakota, including 7.0 last season, and earlier this season he had 9 against Northern Iowa, 8 against the University of Central Arkansas and 7 against Penn.

“I think the one thing that we always say is you have to play your minutes, and a big part of your minutes is your rebounding, especially at that position,” Argenal said of Umude playing the power forward spot at times along with small forward and shooting guard. “You have to get in there and mix it up.”

Umude, who had 12 points in 30 minutes against South Carolina, said scoring hasn’t been his priority during Arkansas’ winning streak.

“Coach has done a good job of making sure I’m focused on defense and rebounding more than anything going into the game,” Umude said. “Because with my athletic ability and versatility on the defensive end, I can make an impact on that side of the ball.

“I think it’s going in with that mindset of, ‘I’ve got to lock somebody up.’ ”

The Razorbacks play a switching man-to-man defense, and the South Carolina players Umude guarded throughout the game combined to shoot 1 of 8 from the field.

“With his athleticism, I think that’s why we challenge him so much, because he has all that talent,” Argenal said. “He has those skills. So we’re just trying to pull as much [out of him] as we can. We know he’ll knock down his shot once he gets going defensively and rebounds.”

Umude also had two steals and two blocked shots against the Gamecocks, and Argenal said he also did a good job getting deflections and keeping his man in front of him.

“I thought in the ball screen, their pick-and-roll action, he was really keeping it on a side and protecting the ball and not letting his man get by him,” Argenal said. “Two weeks ago, three weeks ago, that was harder for him.

“I think he’s moving his feet better and I think he’s much more alert. I can sense something in him on the defensive side. He’s aggressive, he’s confident and he knows our scouting reports better than he has.”

Umude has become a team leader, Argenal said, in helping the Razorbacks overcome their 0-3 SEC start.

“I remember him saying this to me — ‘Coach, I came here to win big and be in a winning program,’ ” Argenal said. “There was a sense of, ‘I don’t want this [losing] to happen,’ and you can see that in his preparation, how hard he’s playing.”