Week of basketball and ducks 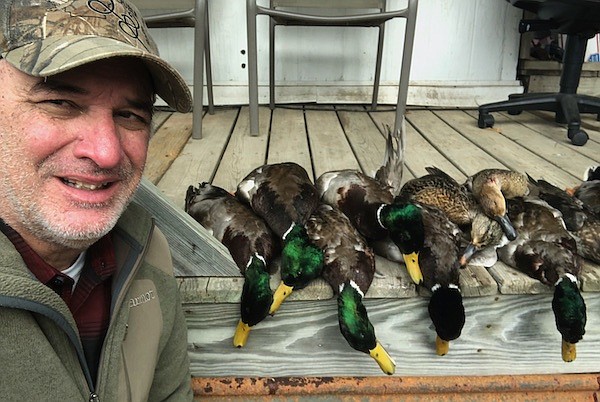 Clay Henry is shown with Arkansas County mallards in January 2022.

Duck camp can be a lot of things good for the soul. It can be great food, and clearly the best scenario includes enough ducks for a quick hunt, especially when the wind chills are 15 degrees as they were a couple of days this week.

Steel Wings Duck Club, owned by Lexicon Steel, has the comfort and wonderful food to provide the perfect respite for a cold duck hunt.

I’ve been coming to Steel Wings for most of the last 10 years. It’s an amazing place, as created by the late Tom Schueck. His son, Patrick, now the Lexicon CEO, has put his touch on it with a new open air — but heated — TV room.

It’s also a good spot to enjoy SEC basketball. I watched more of that in two nights this week than I have in the last month, partly because the matchups were great. In addition to the Arkansas victory over South Carolina, there were three more entertaining games: Tennessee over Vanderbilt, Alabama over LSU and Kentucky over Texas A&M.

All of those outcomes suggest Arkansas (13-5, 3-3) isn’t out of the SEC race, especially if the Razorbacks avenge a loss to Texas A&M this weekend in Fayetteville.

That’s the verdict among the dozen or so at Steel Wings. They all think the Hogs look much like all of those teams, in that they are playing with great effort on defense, something that might have been missing in their stumbles out of the gate when there were losses to Mississippi State, Texas A&M and Vanderbilt.

The Hogs are taking better shots, something I noticed during the second half of the South Carolina game when they did not attempt a three-point shot over the final four-and-a-half minutes.

It was clear that the only way Arkansas was going to take a three-point shot over the game’s final 10 minutes would be if the shot clock was about to expire. The plan was to attack the rim and get either a foul or a layup. The Gamecocks were overmatched off the dribble.

It was the right strategy for the way South Carolina plays defense. The Gamecocks don’t mind fouling in the paint and don’t have a center that can protect the rim. Arkansas coach Eric Musselman’s strategy was perfect.

It may have pained many Arkansas fans dismayed that a string of 1,092 games with a made three-point basket — over 33 seasons — was coming to an end.

I sat with 10 friends around a huge dinner table at Steel Wings with the game on a huge big screen TV. As we were mulling the option of carrot cake, pecan cobbler, orange cake with creamy icing or a sampler platter with all of it, there was debate on whether Musselman should call a set play for a three-point shot to extend the streak.

Right after praising lead cook Melissa Frazier on the pecan cobbler (the first I’ve ever eaten), I pulled out my wallet and slapped it in front of Eddie Mansfield, my hunting buddy from Jacksonville.

“I bet he doesn’t,” I said. “I don’t think there will be a three-point shot attempted in the last four minutes.”

It stunned Jackson. He lifted both hands behind his head and said, “No way. Your eyes tell me all I need to know. There is conviction in that look. No bet.”

I would have won the bet. There were no more three-point shots and the streak ended.

I would have lost a bet earlier in the day. I did not fire a shot on a hunt in flooded timber. That does not happen often at Steel Wings, one of the famed duck clubs on the East Arkansas prairie.

Located between Carlisle and Humnoke in Lonoke County, there are lots of options at Steel Wings. We split our morning between newly flooded timber near Bayou Meto and a pit blind in a flooded field. There were ducks, but they were call shy and stayed out of range.

That was on our first morning, ahead of the cold front. We killed ducks the second morning with a brisk north wind bringing ducks close enough to the famed West Blind at Steel Wings — the late Tom Schueck’s favorite hole — for a good hunt.

My first shot of the two days will go down as one of my bests. Three ducks fell. Mansfield killed another at almost the same instant as we turned a slow start into a great finish to our first two days in camp.

I would not have bet on ever killing three ducks with one shot. But I’ve got a better chance this season. I have a new weapon with some high tech help.

I replaced my 30-year-old Remington super mag 11.87 with a Mossy Oak camo Berretta A400. Kristopher Bouldin, my son-in-law and a great duck hunter, watched me on a dove hunt last fall with the Berretta and suggested some help.

“I think you are high on everything and that Beretta may not fit you,” he said. “I think you need a red dot aiming sight.”

That was forgotten until Christmas morning when Kristopher and my daughter Becca presented me with a sweet fiber optics aiming dot from Burris. Kristopher installed it Christmas Day and we went to the shooting range the next week to adjust the sight.

Shooting sporting clays at the range convinced that it was a wonderful idea. Don’t bet against me on ducks coming straight in or leaving the hole. I can put the red dot on them and they drop. It’s not as easy if they are going across the hole. I still don’t swing through ducks like the good wing shooters.

If they cup and hang in the middle of the hole, that aiming dot makes killing ducks much easier, at least for me. I don’t shoot high anymore.

I’m still not a great shot, but I’m better. Dr. Leo Crafton, my college roommate, noted the improvement after two days of hunting in early January split between Whiskey Chute and Ward’s Reservoir. I killed my share of ducks without using many shells. Some pintails from Ward’s Reservoir will be the next ducks on my living room wall.

There was a time that I’d empty my gun and the ducks would fly out of the hole. My good friend Wayne Reed used to say, “Clay, you could aim.”

That red dot helps you aim. It probably would leave my wife’s grandfather, famed duck guide George “Porgie” Mills, shaking his head in slight disgust if he saw fiber optics on my shotgun. He was among the best shooters (or callers) in Arkansas County and one of the judges when the great Stuttgart duck calling contests began.

If you are among the elite in Arkansas County, the rest of the world is no match.

Among those who hired Mills to guide was outdoor writer Nash Buckingham of Memphis. He wrote magazine pieces for Outdoor Life, Field & Stream and Sports Afield. Buckinham, who was a captain of the Tennessee football team, also picked the All-Southern team for the Memphis Commercial Appeal.

Mills probably hunted the same fields I’ll hunt this weekend. Dr. Jim Counce has invited me for two hunts at Red Hill, a famous duck club near Lodge Corner in the heart of Arkansas County.

Counce played with the Triplets on the famous Arkansas basketball team that played in the 1978 Final Four. Most assuredly, our group will watch the Hogs play the Aggies on Saturday night.

Counce can unpack the coaching strategy as it happens and that will be fun. He was on Eddie Sutton’s coaching staff before opting for medical school.