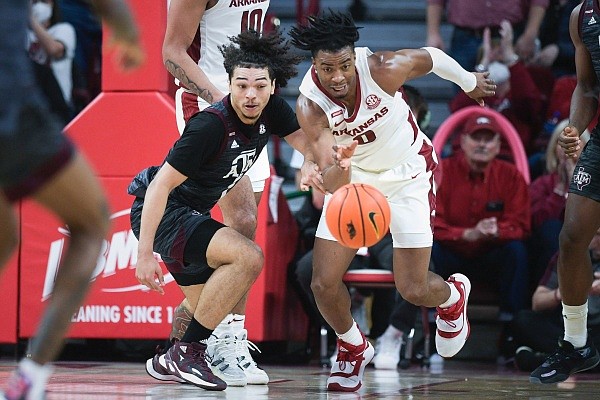 Arkansas wing Stanley Umude (0) sprints to get a rebound on Saturday, January 22, 2022 during the second half of a basketball game at Walton Arena in Fayetteville. Check out nwaonline.com/220123Daily/ for the photo gallery.

FAYETTEVILLE — Before an Arkansas spokesman opened the floor for questions, Jaylin Williams and Stanley Umude went back and forth for nearly one minute pinpointing key numbers in the final box score laid on the table in front of them.

Williams at one point looked at Umude and stated he wasn’t quite sure how he came away with a career-high six steals during the Razorbacks’ 76-73 overtime victory over Texas A&M. Umude then scanned his stat line, moving from left to right.

“You know what my favorite number is?” he asked Williams. “Seven rebounds.”

That was likely Arkansas coach Eric Musselman’s, too. The Razorbacks’ third-year coach for weeks has hammered home the importance of the bouncy 6-6 wing Umude hitting the glass and how doing so would positively impact winning.

Umude had plenty to be thrilled about on an individual level. He was Arkansas’ second-leading scorer with 15 points, matched a season high with 3 assists and notched 3 steals in a game for the first time since Feb. 13, 2021, when he played at South Dakota.

Umude also punctuated the win with a two-hand slam over Aggies forward Aaron Cash with 1.2 seconds remaining in the extra period. Moments after the dunk, the lights were briefly shut off in Bud Walton Arena and the fireworks machine attached to the stanchion in front of the Razorbacks’ bench began operating.

For Umude to claim his rebounding total as his top takeaway in a thrilling night, it speaks to his recent growth and complete buy-in to team success.

“If you look across our roster, he’s improved as much as any player,” Musselman said. “He came to Arkansas as a guy that could score the basketball. We knew that. His shot selection has improved dramatically. As we’ve told you guys and we tell him, obviously, a lot more behind closed doors or in individual film sessions: you’ve got to rebound the ball in the SEC.

Umude continued his high level of play on the defensive end. He finished with nine stops, according to StatBroadcast. Only Williams (16) had more.

And offensively he keyed the Razorbacks’ hot start. By the time Arkansas raced out to a 20-4 lead less than nine minutes in, Umude had buried three jumpers, including a three-pointer, and was looking the part of one of the SEC’s top two-way players.

Williams a star yet again

Whenever a reporter prefaces a question following a game about a player with “I don’t know what’s left to say about him,” it is usually a pretty good indication that player is consistently performing at a level that is rare.

We have officially reached that point with Williams. To a degree, it reminds of the string of impressive showings from All-SEC guard Mason Jones in the back half of Musselman’s first season with the Razorbacks, and forward Justin Smith’s tear down the stretch last season.

The 6-10 forward, battling cramps late against the Aggies, showed tremendous toughness in playing through the pain and knocking down arguably the biggest shot of the night, a two-point jumper on the left wing with the shot clock winding down to put Arkansas ahead 74-71. For Texas A&M, it was a backbreaker and left them needed a three with only 13 seconds to play.

Williams finished with his fourth double-double in the last five games — 14 points, 11 rebounds — but he touched every aspect of the game in his 42 minutes. He added 3 assists, tied a season high with 3 steals and recorded a career-high 6 steals.

According to HogStats.com, he is the fourth Razorbacks front-court player to have six steals in a game since 1997, and first since Marshawn Powell in 2013.

The most recent Arkansas player with six steals in an SEC game was Isaiah Joe, another Fort Smith Northside graduate.

“Man, I’m tired. I feel old. I always tell my teammates I’m the oldest 19-year-old in the world.”

Worn out or not, every coach in the SEC would take Williams on their team.

Toney, Wade deserve some praise, too

While Williams, Umude and JD Notae have received the bulk of the headlines for their play during Arkansas’ four-game winning streak, the other two pieces in the starting lineup that has infused energy into the team have played terrific complementary basketball.

Au’Diese Toney finished with 14 points and 6 rebounds against the Aggies, and Trey Wade pitched in 8 points on a pair of three-pointers and a pair of free throws.

Saturday marked the third consecutive game in which Toney recorded multiple offensive rebounds. He now sits inside the top 20 in SEC-only games in offensive rebound rate, according to KenPom data, at 8.6%.

Musselman said Toney has “done an incredible job” with his activity of late. He has 10 offensive rebounds in the last three games and scored in double figures in each of those outings, too.

Wade’s contributions may not pop in the box score, Musselman added, but he has been solid for much of his run in conference games.

“He guards his guy,” Musselman said. “We never say, ‘Did his man score?' He's always giving great help. He's got to rebound the ball. But he's doing an incredible job as a help defender and guarding his own guy."

Wade has also brought good value to the floor as a forward who can stretch the floor. He is now 4 of 5 from three-point range in SEC games and 7 of 13 overall on jump shots.

Saturday marked the first time since March 3, 2021, that Wade knocked down multiple threes in a game. He played at Wichita State at the time.

“If you look at his past history at his other schools, he can make a three with his feet set,” Musselman said. “He works on it a lot on his own, so certainly we have not told him not to shoot, especially when some teams back off him a little bit.

“I think he's done a great job with his three-point shot selection. He's not taking a high volume of them, but when he is taking them, feet set, clear look at the rim.”

Arkansas needs Notae on the floor

Notae has finished with four or more fouls in three consecutive games. On Saturday, he fouled out for the second time this season and Arkansas had to find a way to win without him.

In his absence, the Razorbacks turned to a mixture of Chris Lykes and Davonte Davis at point guard. Neither played particularly well, but, to their credit, both made key plays in big moments with Notae on the sideline.

There was an uneasy feeling in the arena without the SEC’s leading scorer operating Arkansas’ offense in crunch time. Lykes was a bit turnover prone in his time in the lineup, giving the ball away 3 times in 11 minutes, and Davis had 2 in his 20 minutes.

Lykes continued his tendency of over-dribbling in the half court and running himself into trouble, and Davis’ handle simply has not been as tight lately as it was for stretches earlier in the season.

Though Arkansas came out on the winning side, it was minus-10 in Lykes’ 11 minutes. The Razorbacks were minus-16 in his first eight minutes on the floor.

According to CBB Analytics, Notae has a net rating of 37.4 this season, which ranks in the 99th percentile nationally. Arkansas’ offense is 18.1 points better per 100 possessions and its defensive rating improves 19.2 points per 100 possessions when he is on the floor.

Two things are certain: Notae must stay out of foul trouble, and Lykes and Davis must be more effective in their minutes.